* Rethinking the Idea in the Caymans - Again
After years of struggling to get a plan in place to build a cruise ship pier at George Town (Grand Cayman), and the government constantly signaling that latest incarnation of a plan was very near to finalizing a plan and beginning construction, it appears there’s going to be yet another halt and a complete reset. Not only that, but the new plan they are now considering seems certain to fail because it now seems they don’t understand the cruise industry.

* STX Finland Floats Mein Schiff 3
STX Finland floated TUI’s Mein Schiff 3 at their Turku yard this afternoon, and tomorrow it will be floated out of the dry dock to the outfitting dock where the interior will be completed. More

* Other Things You’ll Want to Know
CND subscribers also read about no more ships for Disney ... and DVR alert for Canada.

STX Finland floated TUI's Mein Schiff 3 for the first time this afternoon (November 8, 2013) at their Turku (Finland) yard. Once floating on Saturday, it will be towed to a finishing dock for completion of the interior. The 99,700-ton vessel will carry 2,506 passengers (double) and a crew of approximately 1,000 when it enters service in June 2014. 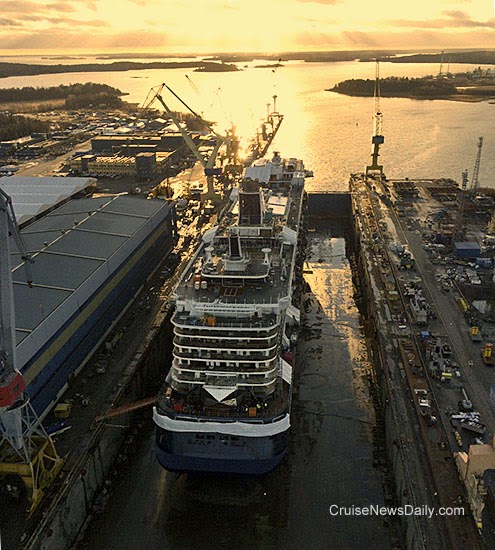 The photo above was taken just as the water begins to flood the drydock this afternoon. Filling it with some 300 million liters of water will take until tomorrow. 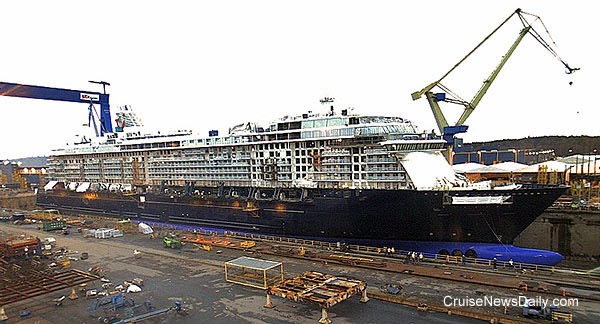 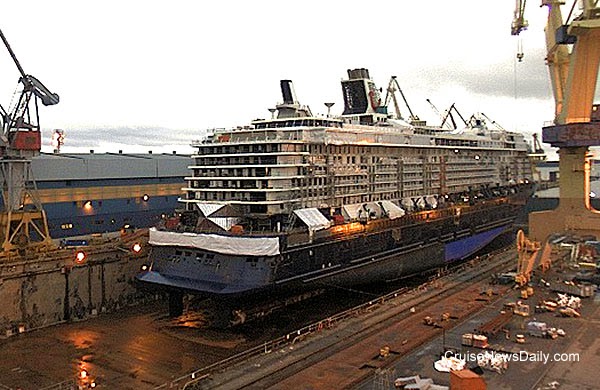 The photo above was taken just before the flooding began after the dry dock has been cleared. 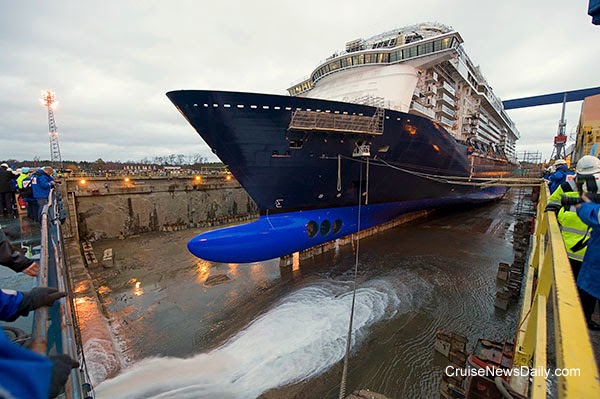 In this photo, the first of the water begins to flood STX's giant dry dock. 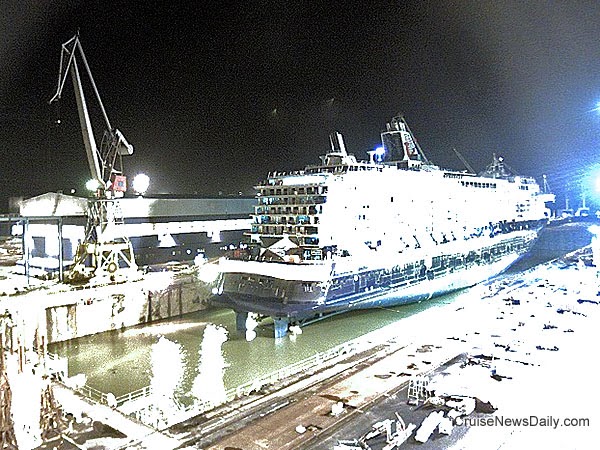 This photo was taken about 6:40pm (local time) showing the water level beginning to rise (note the water level on the propellers compared to the aft photo above) and the effects of a late afternoon snow storm.

The operation continued on Saturday with towing the ship to the finishing dock.

Photos courtesy of TUI Cruises and STX Finland. Copyright TUI Cruises, STX Finland and Cruise News Daily. May not be copied or reproduced without permission. All rights reserved.
. 11/08/2013 05:59:00 PM

* Three Costa Ships out of the Water this Month
Three of Costa’s smaller ships are entering dry dock this month in Italy for $13.5 million worth of maintenance and refurbishment work.

The work is being done at the  San Giorgio del Porto shipyard at Genoa and involves Costa neoRiviera, Costa Voyager and Costa Classica.


* Rush Job
At their meeting Wednesday, Port Canaveral commissioners approved building a new $80 million cruise terminal, and time is of the essence. They want the complex, which includes a new parking ramp, completed by November 15, 2014!


* Upsizing Old San Juan
Puerto Rico’s governor said Wednesday the port will extend the pier at Old San Juan by 182 feet in an $8.7 million project to accommodate ships carrying up to 6,000 passengers.

Today, we have a number of smaller stories that make the cruise industry interesting:

+ It’s all the rage
Carnival became the latest cruise line to announce a sports team partnership. Carnival is the official cruise line of the New Orleans Saints for the 2013-2014 season.

+ Late addition
Over the weekend, MSC Divina left Venice on its way to its new year round homeport in Miami. More

+ Finally something to celebrateThere’s finally some good news for the economy of Grand Cayman. Year over year figures finally showed an increase for a month.

+ Getting ready for winter
News from the Costa Concordia site at Giglio says that winterization of the wreck is continuing and is almost complete.

+ Really big season
The Port of St. Maarten marked the beginning of the 2013-2014 cruise season this morning with the arrival of Royal Princess. And it’s going to be a big one.

+ Mein Schiff 3 Update
The construction of TUI Cruises (in which Royal Caribbean is a partner) Mein Schiff 3 is proceeding at the STX Finland yard in Turku. More

Construction is proceeding on TUI's Mein Schiff 3 at the STX Finland yard in Turku. These photos were taken last week at the yard.

As you may recall from the renderings, there will be an unusual diamond-shaped structure attached to the ship's stern. You can see the space for it in the bottom photo. It will be attached shortly. 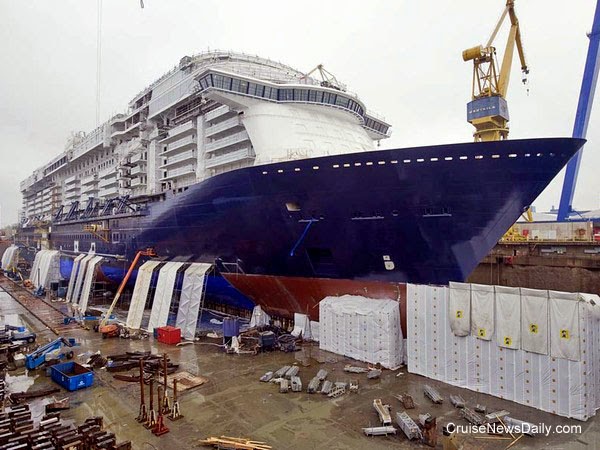 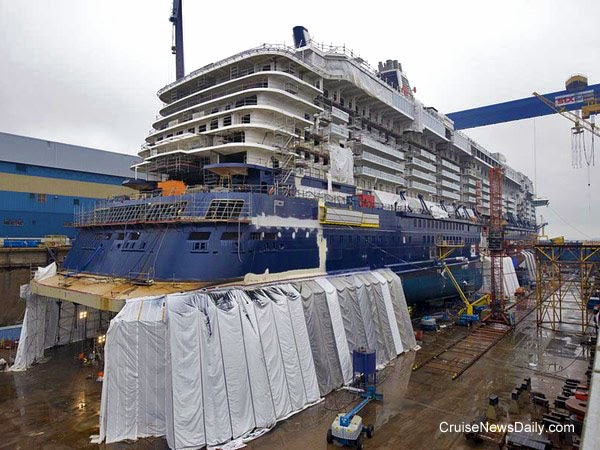 MSC Divina left Venice on Saturday (November 2, 2013) for its new year round homeport of Miami, and to escort it, MSC sent along the most Italian thing they could find - a Fiat 500. Passengers on the 18-day transatlantic crossing are surprised to find the metallic red car on deck. MSC Divina will arrive in Miami on the morning of November 19. 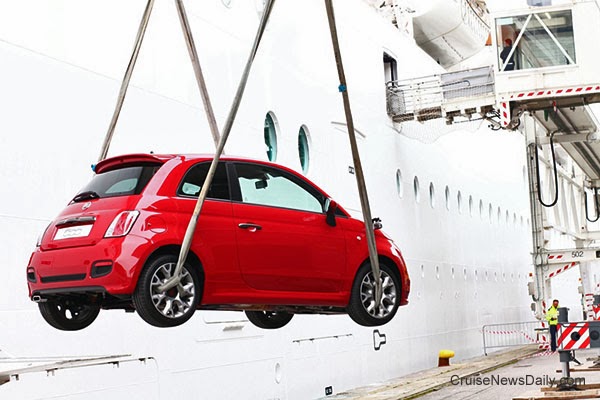 * Venice Severely Limits Cruise Ships
Effective next November, the Italian government will restrict or ban cruise ships of more than 96,000 gross tons in the Venice lagoon.

* Carnival Shuffles Executives
Carnival Corp and the top positions in some of their brands underwent a reshuffling involving some key personalities in the company today. Most of the players will be familiar to consumers who follow the industry - or their favorite Carnival brands - at all.
More - press releases - Howard Frank - Alan Buckelew - Stein Kruse - Jan Swartz

* Other Things You’ll Want to Know
CND subscribers also read about the Love Boat crew is reuniting ... more time to enjoy the ship ... and Norwegian Getaway floats out (more)

"Jan has been at the forefront of industry innovation for a number of years and is highly regarded amongst her peers," Kruse said.

Carnival Corporation & plc CEO Arnold Donald added, “I met Jan a number of years ago when she first presented to the board and I knew right then she was destined to do great work at Princess. She has my full support as she embarks on her new role.”

In 2001, she was appointed the company’s vice president of strategy and business development, and worked on the P&O Princess/Carnival corporate acquisition. Before joining Princess, Swartz worked as a management consultant with Bain & Company, where for five years she worked with leading consumer and service companies on growth strategies. Also while at Bain, she led a team to evaluate and enhance Princess’ call center programs and distribution initiatives prior to Princess’ dramatic expansion.

Swartz holds a master of business administration degree from Harvard Business School and earned a bachelor of arts degree in economics and English from the University of Virginia. She and her husband live in the Los Angeles area with their two children.

Stein Kruse to Become CEO of the Holland America Group

"This is an exciting expanded opportunity for Stein and the experience and track record of effective leadership he brings to it bodes well for our future," said Donald.

In his expanded role, effective December 1, Kruse also will replace Micky Arison as chairman of the board of MANCO, the UK-based entity which oversees operations of Carnival Australia including P&O Cruises, the number one cruise line in the Australian market.

Kruse joined Holland America Line in Seattle in 1999 as senior vice president, fleet operations with overall responsibility for operations and newbuilding. In 2003, he was named president and chief operating officer, and on December 1, 2004, chief executive officer. In January 2011, he was named chairman of Seabourn and the corporate headquarters transitioned from Miami to Seattle.

Under Stein’s leadership, Holland America Line and Seabourn have prospered. He implemented the HAL Signature of Excellence quality and service enhancement initiative and created a health, environmental, safety and security program. As well, Stein has broadened Holland America Line’s philanthropic efforts and encouraged employees to serve on nonprofit boards.

A native of Oslo, Norway, he holds a bachelor of science degree from Purdue University and is a graduate of Harvard Business School's Advanced Management Program. Stein, his wife and two children reside in Bellevue, Wash.

“With his successful track record in both running a brand and as a functional lead, Alan is ideally suited to take on the tasks of this new role,” said Donald.

Buckelew will have oversight of all maritime and port operations around the world and our group collaborative functions, including information technology; group strategy and global operations; ship retrofits; newbuilds; research and development; risk advisory; and quality assurance. Additionally, Buckelew will have oversight of Carnival Asia, with responsibility for coordinating all our brand and related activities in that part of the world.

With a career spanning more than 36 years in the cruise industry, Buckelew has served as chief executive officer of Princess Cruises since June 2007 and as the line’s president since February 2004. In addition he also served as chief operating officer for Cunard Line from 2004 to 2007.

Buckelew has a breadth of experience across cruise operations, having served as executive vice president responsible for Princess’s strategic planning, marketing and yield management services. Before that, Buckelew held various other high-level executive positions in customer service, shared services and yield management. Alan has also served as chief information officer and chief financial officer of Princess.

Buckelew served in the U.S. Army in 1969 and 1970 in Vietnam and was awarded the Combat Infantryman Badge, the Air Medal, the Vietnam Cross of Gallantry with Palm and two Bronze Stars.

Born in Long Beach, Calif., Buckelew holds an MBA and bachelor’s degree from the University of California at Los Angeles. He resides in Los Angeles with his wife, Christine, and two daughters.


Miami (November 4, 2013) -- Carnival Corporation & plc (NYSE/LSE: CCL; NYSE: CUK) today announced that effective December 1, 2013, Howard Frank will be stepping down from his current roles as vice chairman and chief operating officer to take on the role of special advisor to the CEO and to the chairman, while continuing to represent the industry in his leadership role as chairman of CLIA.

"We are greatly appreciative of Howard’s commitment to provide ongoing counsel, advice and industry leadership, as he enters this next stage," said Arnold Donald, CEO of Carnival Corporation & plc.

Frank teamed with Chairman Micky Arison to grow Carnival into the largest leisure travel company in the world. When Frank joined Carnival, the company had 785,000 guests sailing on 14 ships, supported by fewer than 7,000 employees generating $1.1 billion in revenue and a market capitalization of $2.7 billion.

Today, Carnival's 10 brands annually welcome over 10 million guests on more than 100 ships supported by over 90,000 employees generating more than $15 billion in revenue with a market capitalization of $27 billion.

"Howard truly is a pioneer in our industry and he leaves an unequaled legacy at Carnival Corporation & plc," Donald said.

Micky Arison, chairman of Carnival Corporation & plc, added, “For the last 25 years, Howard and I have worked side by side and I could not have asked for a better business partner. I am looking forward to his continued contributions in his new role.”