Carnival Vista Gets Its Name

After sailing the Mediterranean this summer, Carnival Vista is making a stopover in New York on its way to its new Miami home port. In addition to a couple of sailings from there the main reason for the New York visit is to be officially named today.

The naming ceremony was part of a larger gala event honoring Operation Homefront military families which featured a concert aboard for them by seven-time Grammy winner Carrie Underwood.

The complete story appeared in the November 4 edition of Cruise News Daily. 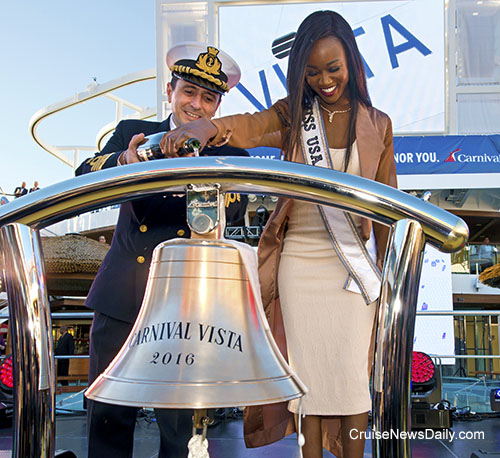 Carnival Vista captain Luigi De Angelis and Deshauna Barber pour champagne over the ship's bell signaling the release of the bottle of champagne against the hull. 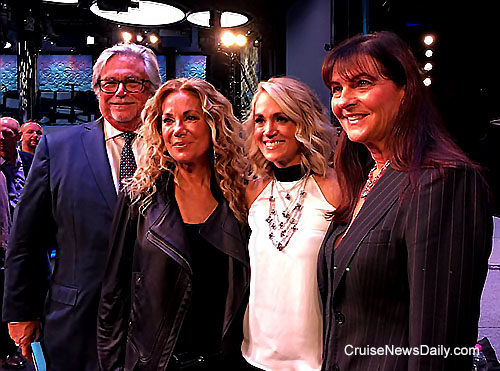 And a blast from the past. Kathie Lee Gifford dropped in to help Carnival celebrate. Here she is shown with Micky and Madeline Arison, along with Carrie Underwood who performed a concert aboard the ship for Operation Homefront military families. This photo was actually taken the day before. Carnival Vista's officers are all smiles after the ship received its US Coast Guard certificate. Of course, getting your picture taken with the boss helps too.

Photos courtesy of Carnival Cruise Line. All rights reserved. May not be copied or used without express permission.

Meanwhile, today, off the coast of Florida, there was probably the biggest meeting in the cruise industry.

The three largest cruise ships in the world met for a photo op on the eve of Harmony of the Seas' first arrival in the US.

This story appeared in the November 4 edition of Cruise News Daily.

Photos courtesy of Royal Caribbean International. All rights reserved. May not be copied or used without express permission.
. 11/04/2016 11:57:00 PM

Carnival Expands Year Round Capacity in Tampa and Long Beach

Carnival will upgrade their programs in two key markets, one on each side of the country, in early 2018.

The moves will expand Carnival's dominance in the Tampa and Long Beach markets. Both ships will offer lengthy repositioning cruises via the Panama Canal.

Everyone Will Have a Chance to Do Good

Just a week after hearing the enormous impact Fathom Cruise Line has had during its calls at the Dominican Republic, Fathom's parent, Carnival Corp, has decided that Fathom's shore excursions in the DR should be opened to all their brands calling there.

Amber Cove has already become a popular leisure resort style call for passengers sailing on the Carnival brands, but this month, passengers will be able to purchase a social impact excursion similar to what Fathom offers there. Those brands include AIDA, Carnival Cruise Line, Costa, Holland America, Princess and P&O Cruises UK.

Last summer we told you Port Everglades was testing it. Now it's in place, and you can use it to speed through Customs.

Port Everglades is the only seaport approved for passengers to use US Customs & Border Protection's Mobile Passport Control program.

The Best Little Bistro in China

When Majestic Princess heads to China, it will be filled with things Chinese people want when they go on vacation. Some of those will be doing things the way they're used to in the dining room, for example, but one thing they want is international experiences.

With that in mind, Majestic Princess will have the finest Parisian bistro east of the Champs-Elysees. Not only that but it comes as a result of a new partnership with three-Michelin-star French chef Emmanuel Renaut. The Chinese will eat it up - literally.

Passengers boarded Carnival Liberty last night after dinner, after being kept waiting all day in Galveston. The ship was arriving about twelve hours late due to “technical issues” that had it sailing way below its normal cruising speed. Along the way they were told a port was going to be dropped from their cruise, but they were getting a nice compensation package. All would be well though, because they would wake up Tuesday morning to a leisurely sea day, and they next day they would have the full day in Cozumel.

When they woke up this morning and pulled back the curtains to go out on their balcony and await their breakfast being delivered, instead of the wide-open sea, they saw the Galveston port around them. They also found a letter telling them to enjoy a leisurely breakfast and then get off the ship, nicely worded, of course. Carnival Liberty wasn't going anywhere today.

There Will Be a Slight Adjustment

As you know, Crystal has been on a major run of expansion. They are expanding in many directions, and with that comes many new customers. As the line learns about those new customers, that knowledge is going to influence and change the way the company grows. Already today the company said they are making a change based on what they know about their new customers.

The 11-year-old Carnival Liberty limped into Galveston this afternoon, almost twelve hours late, at the end of a four-night cruise to Cozumel with an unspecified “technical issue.” The issue is apparently affecting the propulsion system because Carnival said it is affecting the ship's maximum cruising speed, and it was assisted into port at Galveston by two tugboats.

Carnival said repairs are underway but they will take “some time” to complete. They will affect the voyage that will leave today, because Carnival issued a revised itinerary, but they could not say how many more will be affected.

Carnival Spirit arrived Sydney this morning and in honor of the American celebration of Halloween, it was met by a group of witches and a giant spider. 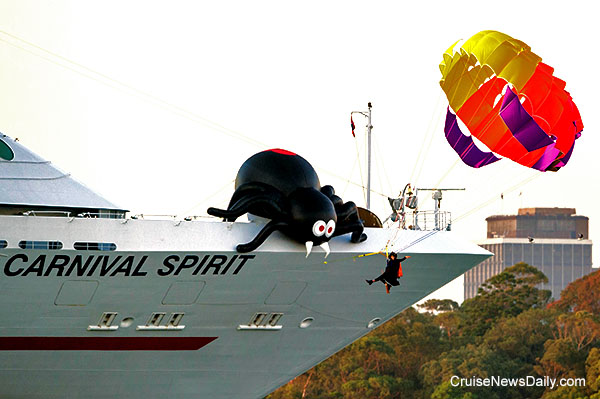