Local media in Ecuador reported that the 2,300-ton Celebrity Xpedition ran aground on a sandbar in the Galapagos Tuesday afternoon about 5:40pm. While there doesn't appear to be damage to the ship, passengers had to be removed from the ship to refloat it.

Fincantieri floated out the 135,500-ton Costa Firenze at their Marghera yard today. The ship is the sister to Costa Venezia which was built at Fincantieri's Monfalcone shipyard and entered service last March.

Look quickly, because Costa Firenze, like her sister, is designated to operate in the Chinese market for the foreseeable future.

Details appeared in the November 6 issue of Cruise News Daily. 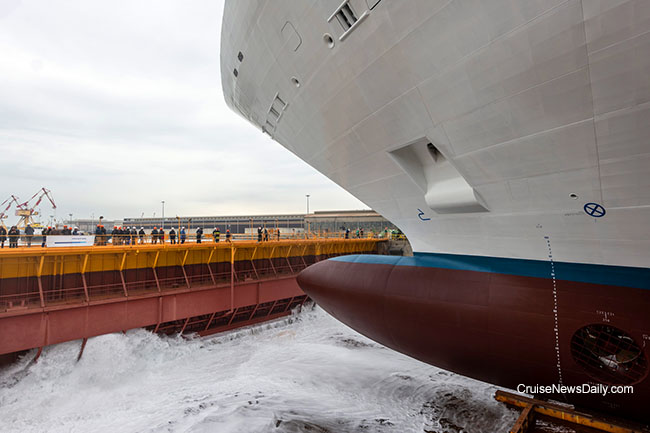 Planting the Norwegian Flag in Alaska

Princess and Holland America have both been closely identified with Alaska - and have become leaders in the market - because of their highly visible infrastructure investments there - ground tour operations, hotels and rail operations. Now Norwegian Cruise Line Holdings, which helped the market explode when the Norwegian Cruise Line brand pioneered the Seattle homeport with more easily accessible cruises (from the US) - is stepping up its infrastructure investments in the 49th state.

The difference is that NCLH's investments are less visible and giving it an advantage over its competitors in booking their ships into the ports.

The complete story appeared in the November 5 issue of Cruise News Daily.

For many years, helicopters have given us amazing aerial views. They are expensive, so despite the spectacular visuals, their use is limited. Now we have drones which are relatively inexpensive to own and virtually free to operate. They can also go where helicopters can't.

As evidence, take a look at the amazing drone video Royal Caribbean has released of Oasis of the Seas in dry dock in Cadiz. The b-roll was shot mainly to show the extensive renovation work being conducted on the ship's top deck, but it also shows some outstanding views of the ship itself and some interesting detail of the dry dock.

This story appeared in the November 5 edition of Cruise News Daily.