Azamara has built its reputation on sailing to interesting ports in far off places around the world, but in 2019 they have scheduled a series of cruises in close-to-home Alaska.

Details appeared in the March 31 edition of Cruise News Daily.

One Legendary Season after Another

Australia's summer cruise season has wound down and Carnival Legend is leaving Saturday for North America. The ship is sailing an 18-night cruise through the South Pacific to Hawaii and then an 11-night voyage to Vancouver. Carnival Legend will then settle into a summer-long series of seven-night round trip cruises from Seattle to Alaska.

The complete story appeared in the March 31 edition of Cruise News Daily.

We told you earlier about all the new features and restaurants that are being installed aboard Caribbean Princess during its 12-day dry dock at the Grand Bahama Shipyard in Freeport to make it da bomb, but today there were fears there really was a bomb aboard the drydocked ship.

What's blue and white, is 145,000-gross tons, has two names, plays the Love Boat Theme on request and is going to disappear in a couple of months? Yes! That's right! It's Majestic Princess.

And it was a big deal today for people around the globe when Fincantieri handed it over to Princess Cruises at Monfalcone.

The complete story appeared in the March 30 edition of Cruise News Daily. 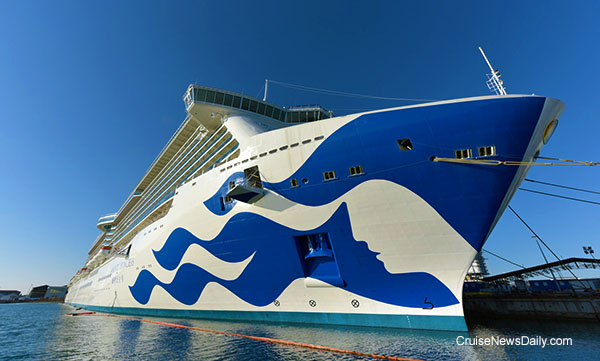 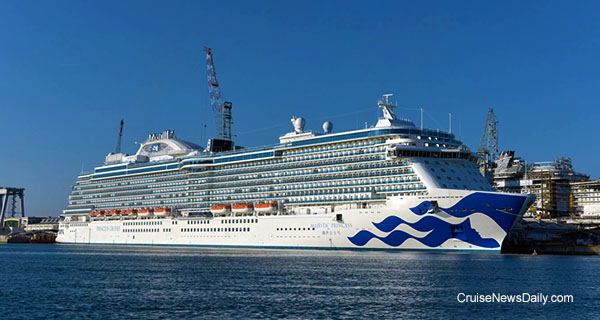 Photos courtesy of Fincantieri and Princess Cruises. All rights reserved. May not be copied or used without express permission.
. 3/30/2017 02:25:00 AM

Despite all the media coverage given to Holland America's decision to cancel their calls at Acapulco for security reasons, Acapulco says they are doing just fine, thank you, with nine other lines calling at the port.

Anyone Else Would Order from Amazon

When Silversea's new flagship, Silver Muse, debuts, it will have a library as most ships do. But they won't just be stocking it with a bunch of books. The ultra luxury line has partnered with the noted literary institution Haywood Hills to create the library for them.

Details appeared in the March 29 edition of Cruise News Daily.

Celebrity Summit passengers were disappointed to learn the line will be taking the ship out of service next month for some unscheduled repairs, while Anthem of the Seas' passengers learned yesterday that Royal Caribbean is going to be making some “roadside repairs” on their ship.

When Caribbean Princess returns to service on April 6 following its two-week dry dock, it will come back with a slew of new restaurants and changes to existing ones, all offering new choices and options.

"Fresh, regionally-inspired and family friendly offerings were the inspiration behind our largest food and beverage makeover ever," said Princess president Jan Swartz. "With updated decor and designs that offer a welcoming atmosphere, the seven new dining options aboard Caribbean Princess are sure to please any palate and delight the senses."

The complete story appeared in the March 28 edition of Cruise News Daily.

If you logged onto the Meyer website on Sunday afternoon you would have seen Norwegian Joy leaving the Papenburg yard on its way to Eemshaven at the other end of the River Ems, the first leg of its journey to Shanghai.

It moves with the speed of paint drying because the ship is so big (the largest class ever built in Germany at 168,800 gross tons), the river is so shallow, and the passages are so narrow. Not only that, but it sails backwards for better maneuverability.

Details appeared in the March 28 edition of Cruise News Daily. 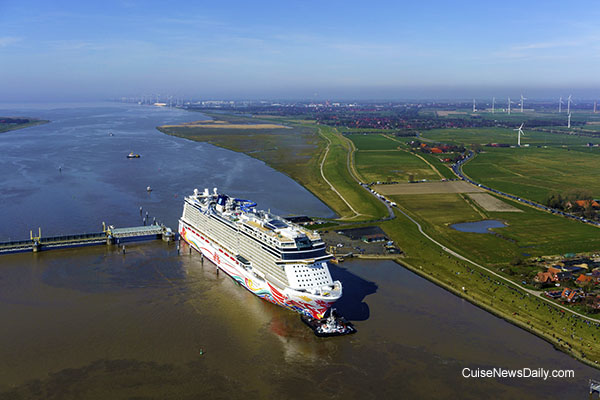 How Adventurous Are You?

Do you like to sky dive into active volcanos? Or jump into alligator-infested waters just to see if they'll eat you? Well, Royal Caribbean isn't necessarily looking for anyone quite that adventurous (but if you really happened to do those things, you'd probably win), but they are looking for what would pass for “very adventurous” in the normal world - so adventurous they also have an Instagram account.

What Royal Caribbean is looking for is the “World's Most Adventurous Squad.” When they find them, they are going to give them a trip anywhere in the world Royal Caribbean sails.

To win that trip for you and your squad, all you have to do is prove it.

Details appeared in the March 27 edition of Cruise News Daily.

Weinstein will be responsible for overseeing both P&O Cruises and Cunard.

Noyes will remain in his role until July 18 to ensure a smooth transition. The Southampton-based Carnival UK executive team will then report to Weinstein, following his move to the UK in April. Carnival UK chairman David Dingle will continue in his role.

A graduate of the University of Pennsylvania and the New York University School of Law, Weinstein, 43, joined Carnival Corporation 15 years ago as an attorney in the corporate legal department before assuming the role of corporate treasurer.

Carnival Corporation CEO Arnold Donald said: "Some time ago, David Noyes advised me that he wished to step down as CEO Carnival UK during 2017 to spend more time with his family.

"David has excelled in his time as CEO of Carnival UK and has planned a smooth and effective transition.

"We greatly appreciate his leadership, his team spirit and the many important contributions he has made to our success."

Donald added: "In his current role, Josh Weinstein has been a strong contributor to the company's successful results.

"I am confident he will do a great job in his new role and continue to build on our strong legacy of success in the UK. "

"The two groups will continue to be managed separately as they are today but will benefit from more closely aligned collaboration."

Noyes said: "I will be leaving Carnival UK as a thriving, profitable and market leading business. I know that with Josh at the helm, the company will continue to go from strength to strength as the UK cruise sector maintains its exceptional levels of growth."

With more than 30 years of experience in the travel industry – including positions at other cruise lines, a major travel agency consortium and a land-based tour operator – at MSC Cruises’ Jiffo will be responsible for strategically continuing and expanding our valued relationships with trade partners.

“We are extremely excited to welcome Joe as the newest member of our executive team,” said Roberto Fusaro, president of MSC Cruises USA. “Joe is well-respected and has a proven track record of exceeding sales goals and increasing market share. His relationships with the travel agent community and broad experience within the travel industry will prove invaluable as MSC Cruises significantly grows its brand in North America.”

“I am thrilled to be joining the team at MSC Cruises,” said Jiffo. “The company is expanding incredibly fast and I am looking forward to continuing the team’s initiatives to grow the brand in North America and ensuring that MSC Cruises is the easiest and most profitable brand to work with.”