* Painting on the Outside
P&O sent along some outstanding pictures yesterday. It seems they have come to the point in Monfalcone where they are painting P&O’s new livery on Britannia’s hull.

* Painting on the Inside
Cunard has something unique coming aboard a November crossing on Queen Mary 2. It’s better than watching paint dry. On this crossing, you’ll be able to watch a world renowned artist apply the paint and create an entire work of art during the voyage and then create cash for a worthy charity.

* Other Things You’ll Want to Know
CND subscribers also read about getting a break ... and not yet.

Yesterday, Fincantieri painted P&O's new livery on the hull of Britannia, which is under construction at their Monfalcone (Italy) yard. The stunning new design is a giant, stylized Union Jack flowing back on the hull from the bow. It leaves no mistake P&O is a British brand. The line's other seven ships will eventually also carry the new livery.

Britannia will enter service in March 2015.

The complete story appeared in the September 26 (2014) edition of Cruise News Daily. 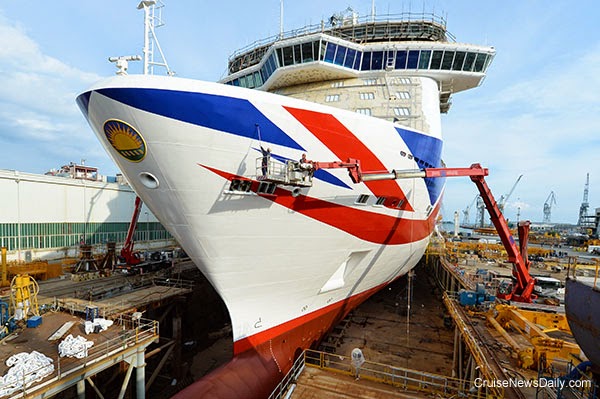 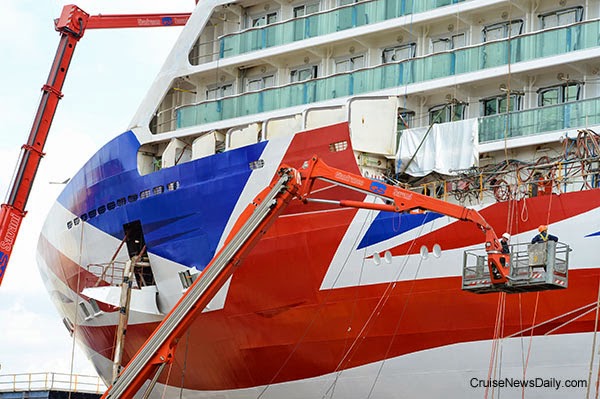 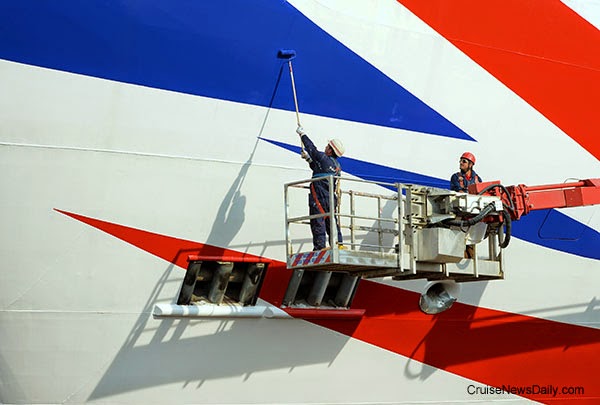 * The SS United States May Finally Be Running out of Steam
Earlier this week the SS United States Conservancy (which owns the classic ocean liner) issued a press release.
They said some interesting things, but it wasn’t crystal clear in what they wanted to say. It seemed to be both a pitch for funds, and it also may have been a maneuver to try to move some negotiations along in finding a new home for the ship.
It was perhaps more interesting in what was being said between the lines.

Hail to the Hibernia: Cunard Line Arrives in New York


25 September 2014 – On 29 December 1847, Cunard Line made its first call to New York when Hibernia arrived. The Herald newspaper's front page screamed “Hail to the Hibernia” and detailed how "the entire populace swarmed to its waterfront to cheer the coming of the first Cunarder to the harbour of New York.”

Citing the wonders Cunard had done to Boston in terms of commerce and population growth, The Herald claimed Cunard's first ship, Britannia, had "initiated a new era in human intercourse."
The newspaper went on: "The arrival of the Hibernia...is only the beginning of the revolution that is going on in ocean steam navigation, which will ultimately result in drawing all steamers to this port. Our merchants ought to welcome Captain Ryrie to New York. Why not give him a public dinner, Friday next?"

And what a dinner Manhattan gave to the good Captain Ryrie! Toastmaster Depeyster Ogden proclaimed, "In the name of the city and of the merchants, we welcome you to the city of New York, Captain Ryrie. The establishment of this new Cunard Line is the commencement of a new era in steam navigation. The Cunard steamships have been attended with undreamed-of success... the skill and science displayed in their navigation is deserving of praise, and reflects the greatest credit on all concerned."

New York quickly replaced Boston as the American terminus for Cunard's services. And what a relationship Cunard and New York have had since. The maiden arrivals of the line’s greatest ships were welcomed like no other.

The advert warning passengers not to travel on an Atlantic voyage appeared in New York papers on 1 May 1915 the day Lusitania sailed - six days later she was torpedoed.


The arrival of Queen Elizabeth after her secret dash across the Atlantic in 1940 remains perhaps the strangest arrival of all.

The sight of Queen Mary and Queen Elizabeth, in their wartime livery, together with the French liner Normandie, is one of the most memorable maritime images (below) captured in the city. Plus spot the second Mauretania:

The first gathering of three Cunard Queens took place when QE2 and Queen Victoria met with Queen Mary 2 in January 2008.

The Cunard Building at 25 Broadway was built to match the splendor of the Cunard Building in Liverpool. Two bookends on the Atlantic, Cunard's ocean. The building was opened in 1921 and Cunard was based there until moving to 555 Fifth Avenue in 1968.

While Cunard itself relocated to Miami in 1996 its ships have remained and will always be “Englishmen in New York” or “native New Yorkers” depending on which song you prefer!

* The Steakhouse Comes to You
Carnival has a new program in the main dining room for people whose mouths water for a premium steak or lobster from the Steakhouse but circumstances aren’t allowing them to get there.

* A Drop of Blood
Helicopter medevacs from cruise ships have become so commonplace they are barely noticed anymore. Despite being incredibly complex, the Coast Guard crews are so practiced and adept that it looks like a cinch.
But what do you do when they ship is much too far from land for a helicopter to pick up an ailing patient? Again the Coast Guard comes to the rescue (literally), this time by bringing help to the patient. In yesterday’s case it was a precision parachute drop of life-saving blood to Carnival Miracle 400 miles away from Oahu.

* Other Things You’ll Want to Know
CND subscribers also read about one more time ... and you are challenged.

Meyer Werft successfully took Quantum of the Seas down the Ems River to the sea on Tuesday (September 23, 2015) afternoon and evening, arriving at Eemshaven early Wednesday morning. This video shows the river conveyance from Meyer Werft's perspective.

A US Coast Guard HC-130 aircraft from Barber's Point Air Station (near Honolulu) successfully dropped urgently-needed blood to Carnival Miracle Tuesday morning (September 23) while the ship was traveling between Vancouver and Kauai. Carnival Miracle was located 400 miles northeast of Oahu at the time.

The complete story appeared in the September 24, 2014, edition of Cruise News Daily.

UPDATE: Thursday, September 25
There was more to the story which happened later Tuesday when the patient's condition continued to deteriorate. When Carnival Miracle was 80 miles north of Oahu, a Coast Guard helicopter and C-130 returned to medevac the man to a Honolulu hospital. In the infrared video below, you can see the helicopter operation over the deck of the cruise ship. The video was shot from the C-130 as it circled Carnival Miracle.

* Carnival Had Lots to Say Today
Carnival Corp held their quarterly conference call for analysts to discuss their third quarter earnings today.
They had a net income of $1.2 billion for the quarter, up $100 million from the same quarter last year, and a lot of their extra spending money this quarter came from onboard revenue. But that’s enough of the hard financial news for our purposes. If you have a cruise booked, you know they’re not going out of business before you return.
What our readers are going to find more interesting are the other things they discussed - where the company is going, and what they are doing to make more money.

* Floating Along
Princess Cruises has been floating along for fifty years, and this year the line is having a number of special celebrations to mark the milestone year. So there’s no more fitting way for them to celebrate their fiftieth year afloat than by having a float in the Rose Parade.
And because the Love Boat TV show has played such a major role in the company’s story, can you think of anything more fitting than to have the six original cast members from the series riding on the float?

* Other Things You’ll Want to KnowCND subscribers also read about skipping Cabo ... and on second thought.

Quantum of the Seas departed Meyer Werft this afternoon after weather related delays. It is currently traveling backwards (for better maneuverability) down the Ems River toward Eemshaven where it is scheduled to arrive early on Tuesday morning. 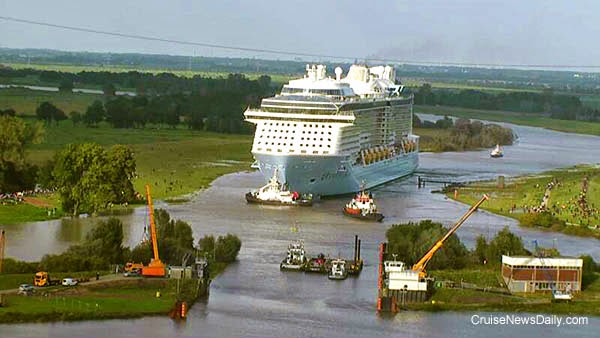 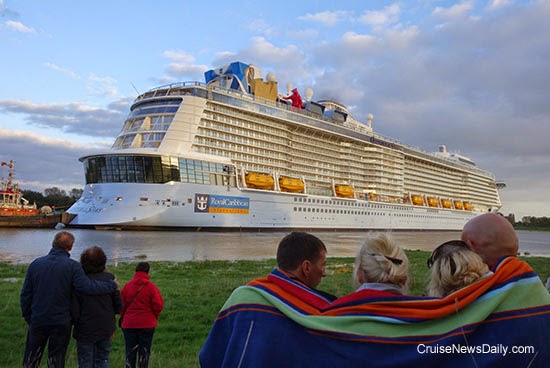 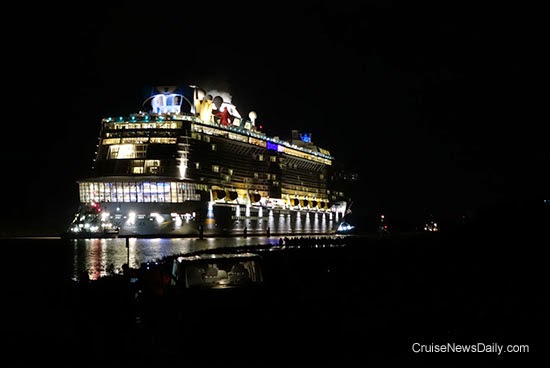