The US Coast Guard medevaced a 47-year-old woman from the Norwegian Jewel cruise ship as it was sailing 115 miles east of Cape Henry (Virginia) Friday evening (March 9, 2012).

A helicopter crew from the Coast Guard station at Elizabeth City (NC) hoisted the woman and her husband from the deck of the ship about 7pm, and transported them to a Norfolk hospital as shown in the Coast Guard-provided video below.

The video was shot from outside the door of the helicopter as it hovered over the deck of the cruise ship. In the beginning seconds of the video, you can see the water below and the side of the ship as the pilot maneuvers over the deck of Norwegian Jewel. Notice the speed at which the ship is moving, and the helicopter needs to synchronize its speed exactly to hover over the deck. To the right, you can see the skylight into the ship's pool area. Once in position, the patient is then hoisted from the deck on the stretcher.

Costa Crociere said today they received six proposals to remove the wreckage of Costa Concordia by the March 3 deadline.

What will disappoint residents of the Island of Giglio, however, is that the estimates for the length of time it will take range from ten to 12 months. The time frame was lengthened not only by the complexity of the project, but also by the margin of environmental safety upon which Costa/Carnival insisted.

Technical assessment of the proposals has already begun, and a final choice is expected to be made by late March or early April.

Cruise passengers aren't the only visitors to Royal Caribbean's new port of Falmouth in Jamaica. HRH Prince Henry of Wales, otherwise known as Prince Harry, is seen in the photo below visiting the port yesterday to board the Trolley Tour of Historic Falmouth at the Cruise Port. The port was developed as a partnership between Royal Caribbean and the Ports of Jamaica. Prince Harry is on a four-day stay in Jamaica while touring the Commonwealth countries in the Caribbean as part of the Queen’s Jubilee. There is no word on how many of the local pharmaceutical salespeople showed his highness their product lines. 
* Dropping the Anchor Earns a Trip to Jail
Remember the man aboard Holland America's Ryndam in November of 2010 who had a few drinks, and then found his way into an off-limits area of the ship through an unlocked door and deployed the ship's stern anchor?
After earlier pleading guilty, he was sentenced yesterday, and some of the court records were opened and we got a little insight to what the man was thinking. Video

Video of Passenger Releasing Anchor aboard Holland America Ryndam in 2010

A man was sentenced yesterday in Federal court for entering a restricted area aboard Holland America's Ryndam in November 2010 and deploying the ship's 18-ton stern anchor while the ship was traveling at about 18 knots through the Gulf of Mexico.

According to the US attorney, the ship could have been severely damaged to the point it would have sunk. Fortunately, the ship was in water more than a mile deep, and the anchor chain was only about 600 feet long, so there was no damage to the ship.

This video from Holland America's security camera shows the man releasing the anchor. It was entered into evidence and released by the court at the end of the case.

The man was sentenced to four months of incarceration followed by three years of probation and a $7,500 fine.

The complete story appeared in the March 7, 2012 edition of Cruise News Daily.

Disney Fantasy arrived at Port Canaveral, her new home port, early this morning fresh from her christening last week in New York. Shown in the photos and video below are the fireboat salute and fireworks that greeted her just as dawn was breaking. As you can see, there was a special welcoming party on the dock that was so early, some of them didn't even get to put on pants. 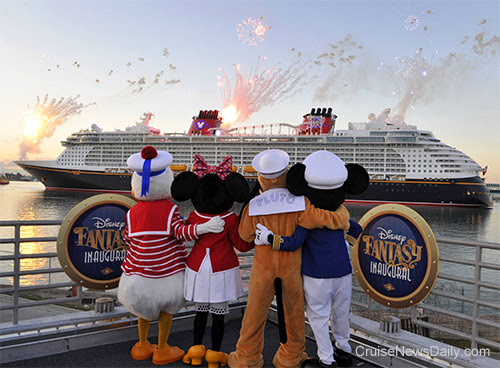 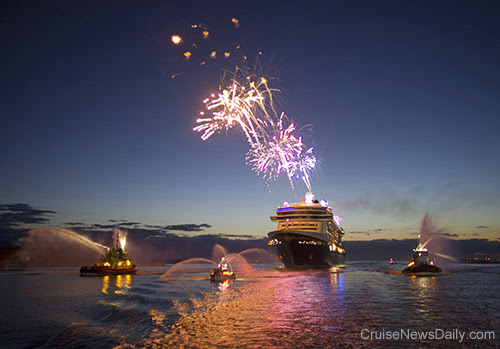 Carnival Destiny to Undergo Massive Refit and Be Renamed

Carnival Destiny will not be leaving the brand's fleet as rumored. Instead it will undergo a major refit including expansion of several decks, and it will be renamed Carnival Sunshine in early 2013. When it returns to service it will incorporate all the "Carnival 2.0" features, most of which will have debuted on other ships by then.

The expansion will include 182 new staterooms raising double capacity to 3,006 passengers.

Plans for Carnival Sunshine then include a summer 2013 Mediterranean season, and at its completion it will be moved to New Orleans for year round service from there. The Mediterranean itineraries will generally be a series of nine- and 12-night sailings either round trip from Barcelona or between Barcelona and Venice (or vice versa) beginning in April 2013. It will reposition from Barcelona to New Orleans with a 16-day transatlantic crossing beginning November 1. From New Orleans, Carnival Sunshine will sail three different 7-night itineraries in the western Caribbean and Bahamas.

The $155 million refit will be carried out at Fincantieri, during a 49-day drydock that will run from February to April 2013. The Fincantieri yard will be designated at a later date.

The new itineraries are now open for sale through the 2013/2014 winter season. Deck plans are available on Carnival.com

Details appeared in the March 6, 2012, edition of Cruise News Daily.

While inspections and repairs are completed on Costa Allegra, which suffered a generator room fire last week, Costa will replace it on its scheduled programs with Costa Voyager beginning March 18. The company still does not have an estimate on how long the ship will be out of service.

Costa Voyager's original itineraries in the Red Sea will be suspended. Passengers booked on the Red Sea program, are being offered other 7-day programs or the option to cancel without penalty plus a future cruise credit equal to 30% of the fare they paid on Costa Voyager. Alternative cruises Costa is offering include a 7-day option in the UAE, a 7-day Caribbean option from Guadeloupe, and 7-day eastern and western Mediterranean programs.

The 24,000-ton Costa Voyager carries 832 passengers, double occupancy, with a maximum capacity of 927 passengers. It was originally built for Royal Olympic Cruises in 2000 as Olympic Voyager, and in 2004 joined the Iberocruceros fleet. (Iberocruceros is a Carnival brand.) Last year it was refurbished and transferred within the Carnival fleet, to the Costa brand.


Details appeared in the March 6, 2012, edition of Cruise News Daily.


* Revitalizing Rhapsody
As you read this, a $54 million month-long revitalization of Rhapsody of the Seas is underway in Singapore. It will be similar to the sweeping changes that were aboard Splendour of the Seas last November, bringing some of Royal Caribbean's current features aboard the 15-year-old vessel.
The work is taking place at the Sembawang Shipyard, and it is the largest refurbishment ever to take place in Singapore, employing more than 800 workers.

* Fuel Continues to Be Drained from Costa Concordia
Before Smit Salvage began the operation, there was intense media attention on the process of removing the fuel from Costa Concordia. There now seems to be little interest in the ongoing process, which is now entering one of the more interesting phases.

* Norwegian Crew Member Arrested
A 29-year-old assistant cruise director aboard Norwegian Star was arrested yesterday while the ship was in Tampa. Federal authorities are charging that the man had sexual contact with a 16-year-old girl from Minnesota during the ship's January 29 sailing. Allegedly the two subsequently exchanged e-mails containing sexually explicit photos of each of them.
At the moment, the man has only been officially charged with the possession of child pornography.

After Disney Fantasy's christening in New York last week, it left for Florida, but on it's way out, Disney videographers shot this interesting video of the trip out of New York Harbor. They positioned their camera on the Disney Fantasy's top deck looking forward at the giant video screen over the pool, which is playing the video from the ship's bow camera. In the video you then see the dusky panorama unfolding to the sides over the railings of the ship, while you see the view out the front of the ship broadcast on the video screen. To add a touch of surrealism, they time-lapsed the video. Enjoy!