Meyer Lays Keel for Odyssey of the Seas - Differently

Meyer Werft laid the first block of Odyssey of the Seas today at their Rostock/Warnemunde yard, Neptun Werft. That marks the beginning of the actual construction phase of the ship which is scheduled for delivery in the fall of 2020.

The complete story appeared in the May 3 edition of Cruise News Daily. 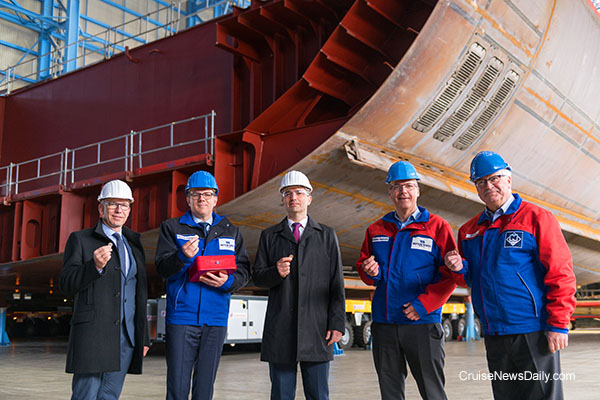 Details appeared in the May 3 edition of Cruise News Daily.

Holland America Line has joined the club, and they now have an app for passengers to use aboard their ships to provide conveniences such as dining reservations, shore excursion reservations and free passenger-to-passenger communications. It's called Navigator.

The complete story appeared in the May 2 issue of Cruise News Daily.

Looking ahead a couple of winters, Princess has released their winter 2020/2021 Caribbean and Panama Canal programs. It will bring Princess' newest and largest ships to the region.

Royal Caribbean held their conference call today to discuss their first quarter earnings. As usual, a couple of topics seemed to keep arising. This quarter it was Perfect Day at Coco Cay and the impact on earnings of shipyard accident involving Oasis of the Seas. There were also a couple of other interesting comments.

The complete story appeared in the May 1 issue of Cruise News Daily.

When Ruby Princess sailed into Ketchikan and Juneau over the weekend, it began Princess' 50th year sailing in Alaska. The season will continue through September with seven Princess ships sailing to the state.

Princess will take a further step forward on May 11 when Royal Princess arrives and with it comes Medallion Class, the first ship in Alaska to feature Ocean Medallion and all the conveniences it brings with it.

The fifth episode of Crystal's Culinary Journey with Chef Jon Ashton is out, and this time he's in Perth to explore Perigord black truffles.

Details appeared in the April 30 edition of Cruise News Daily.

Carnival Triumph entered the shipyard at Cadiz and left a month later as Carnival Sunrise, and today she reentered service at Norfolk with a host of new and upgraded features, including her new identity.

The complete story appeared in the April 29 issue of Cruise News Daily.

Up in the Air

As Royal Caribbean International gets ready to open Perfect Day at Coco Cay next month, some of the features are having soft openings. Some visitors are getting to see the island like no others from a tethered helium balloon 450 feet above the island. From the vantage point, they can see the beautiful beaches (which have always been an attraction), the Oasis lagoon (the largest freshwater swimming pool in the Caribbean, which is now open) and the pier where ships are now docking. 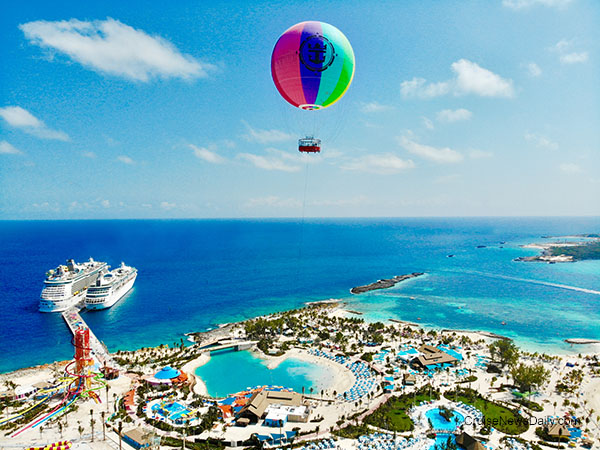 Photo courtesy of Royal Caribbean International. All rights reserved. May not be copied or used without express permission.
. 4/29/2019 11:57:00 PM