Holly Golightly Would Be Pleased

Iconic New York Jeweler, Tiffany & Co, has joined the growing number of high-end jewelers opening seagoing branches. Tiffany opened their first freestanding boutique at sea today aboard none other than the largest ship at sea, Oasis of the Seas. Where will the store be located? In Central Park, of course.

The complete story appeared in the November 20 edition of Cruise News Daily.

Associated British Ports and Carnival Corp have begun a five-million-pound upgrade at Southampton’s QE II Cruise Terminal.  The work, which will be done in two phases, will bring the terminal into line with the other terminals which were remodeled in the last couple of years.

Construction of Harmony of the Seas, the third Oasis-class ship, continues at the STX yard in Sainte-Nazaire (France). The photos below were taken last week and show the progress on the Aqua Theater at on the ship’s stern. Delivery is still set for next spring. 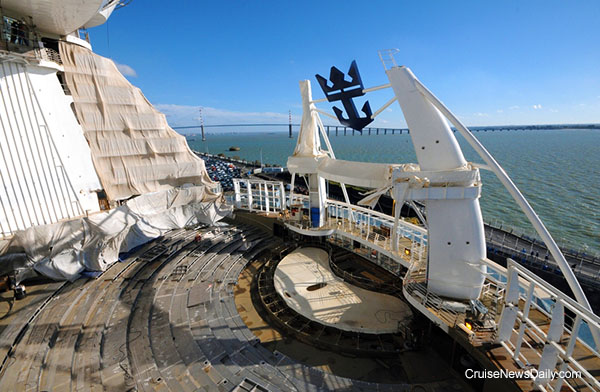 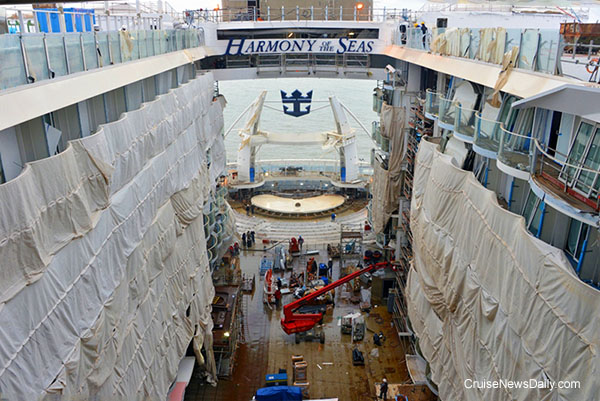 Odell brings a wealth of cruise industry experience earned over the past thirty years through pioneering activity in a variety of senior positions in the luxury sector. He played a key role in the establishment of the luxury cruise segment in Australasia since 2000, previously serving as Silversea’s President EMEA & Asia Pacific.He has also served as Chairman ICCA (now CLIA Australasia) between 2005 & 2007 and was a founding Board member of the Asia Cruise Association (now CLIA Asia).

As Senior Vice President and Managing Director for China, David Herrera is responsible for overseeing all of Norwegian Cruise Line Holdings’ brands in the quickly expanding China market, including the home-porting of NCLH’s newest and largest ship in the market. Most recently, Herrera co-chaired the task force created by NCL to decide its future deployment strategy in China. Previously, he served as Senior Advisor to the Chairman and CEO of Prestige Cruise Holdings, where he led a group responsible for researching the Chinese cruise market for Oceania Cruises. David began his finance and investment career at Goldman, Sachs and Sanford C. Bernstein where he advised executives and families on all investment matters and was the founder of a private investment firm focused on dynamic and early stage growth opportunities similar to NCLH’s opportunity in the emerging China cruise market.

Frank Medina joins Norwegian Cruise Line Holdings as Vice President and Managing Director for Latin America. He brings more than 20 years of experience in the cruise sector, most recently having served as Commercial Director for Key Markets in North America for Celebrity Cruises, overseeing strategic planning and execution of sales and marketing initiatives across the brand’s top markets. He previously led the growth and development of Royal Caribbean International, Celebrity Cruises and Azamara Club Cruises as the Director of Sales and Marketing for Latin America & Caribbean.

Costa is the first in the tourism industry to sign the Barilla Foundation protocol, which focuses on worldwide imbalances in nutrition and food

GENOA, Italy (Nov. 19, 2015) -- Costa Cruises is the first company in the tourism industry to sign the Milan Protocol. Promoted by the Barilla Foundation Center for Food and Nutrition, the Milan Protocol is an initiative that focuses on tackling the problem of worldwide imbalances in nutrition and food.

The initiative has three main objectives: to promote healthy food habits, reduce food waste and promote sustainable agriculture. The idea is to create a civil movement that encompasses institutions, companies and organizations -- as well as individual citizens -- that will enhance awareness and propose solutions to the global challenges related to the agriculture-food chain.

"Costa Cruises supports the Milan Protocol because we believe that its objectives match the values of our company," said Neil Palomba, president of Costa Cruises. "We want to continue to work to promote a sustainable food model onboard our ships. We believe it is possible to propose to our guests, who come from 200 different countries, an excellent gastronomic experience, based on Italian traditions, that effectively combines pleasure, health and wellness, while avoiding waste and reducing environmental impact."

"We are delighted that an important company like Costa Cruises has become a part of the Milan Protocol," said Luca Virginio, vice president of BCFN Foundation. "We hope that its support will encourage others in the tourism industry to contribute -- through noteworthy initiatives like those developed by Costa Cruises regarding the menus offered on their ships -- to fight the important battle against hunger, obesity, food waste and exploitation of the Earth."

Costa Cruises' commitment to the protocol includes a reassessment of the menus and food preparation processes onboard its ships. And, to minimize environmental impact, priority will be given to fresh food and products coming from local suppliers near the ports where Costa ships call.

In this position, Townsley will be responsible for working with the nation’s largest Online Travel Agencies to develop strategic partnerships and marketing initiatives that help generate excitement about the cruise line’s future – which includes the introduction of seven new ultramodern ships as well as plans for significant growth in North America, specifically, with two ships – MSC Divina and MSC Seaside – based in Miami and doing year-round sailings to the Caribbean.

“We are thrilled to welcome Brandon to the MSC Cruises team” said Ken Muskat, executive vice president of sales, PR & guest services. “With a strong tourism, travel background and leadership experience across multiple areas, Brandon will play a vital role in helping MSC continue to elevate brand visibility and deliver on our ongoing ‘Serving You’ commitment to travel agents as we strategically grow and expand in the North American market, as well as around the world, in the coming years.”

Townsley joins MSC Cruises with more than 20 years in the cruise and travel industry. After beginning his career with Royal Caribbean in 1996, Townsley has spent the last several years at Norwegian Cruise Line holding leadership roles in the areas of revenue management, sales planning and analysis, field sales, charters, meetings and incentives and international sales.

You Were Expecting Maybe ... Santa Claus?

The Grinch will be working overtime this year. He’s going to be trying to steal Christmas on all 24 Carnival ships.

Thanks to Carnival’s “Seuss at Sea” program, the legendary green character will be popping up in his “Santy Claus” costume at activities all over every Carnival ship during the entire month of December.

Royal Caribbean said Thursday they have finalized arrangements for financing by KfW IPEX-Bank for the fourth and fifth Quantum-class ships, which will be built by Meyer Werft.

Princess Cruises has a new service for agents in Australia. It’s a chat service designed to allow them to get quick answers to questions about Princess without having to leave the line with the client.

All passengers and crew evacuated Ponant’s Le Boreal early today due to an engine room fire. The ship issued a distress call at 2am as it was sailing near Cape Dolphin north of the Falkland Islands.

This is the first video in a series about Holland America Line's MS Koningsdam which is currently under construction at the Fincantieri shipyard in Marghera Italy near Venice. Koningsdam will debut in April 2016.

In this installment, Hotel Director Stan Kuppens shows off the progress of ship’s atrium and talks about his move to the yard and what’s coming next for his team.

The complete story appeared in the November 18 edition of Cruise News Daily.

P&O Australia decided to poke a little fun at their competitors in Australia in a just-released video. Most American-based lines price everything onboard in US dollars, which is inconvenient and unhandy for most of their passengers on Australian sailings who are Australian. They have to keep in mind when they sign a check for a $5 drink they are actually going to pay closer to eight Australian dollars for it when they settle up at the end of the cruise. P&O, on the other hand, prices everything in Australian dollars, so the line decided to show what would happen if another company doing business in Australia priced its products in US dollars.

Carnival’s popular concert program, Carnival Live, is back for another year, and today Carnival announced the line-up of artists for the 2016 season.

The program brings big-name musicians aboard the Carnival ships for a one-night concert at prices far below their normal ticket prices and in a venue vastly smaller than the stadiums in which they normally play.

It was just in July that Crystal announced a major expansion of their brand by adding more ships and moving into river cruising and luxury air tours. That was followed by the announcement that the company had secured a Boeing 787 Dreamliner for their air operations named Crystal Luxury Air.

Today, the company said they have purchased a second aircraft, a Boeing 777-200LR, essentially doubling capacity, to offer 14- and 28-day around-the-world and international itineraries, beginning in 2017.

It Happens Every 15 Years

Seabourn Cruises will return to Alaska in 2017 with Seabourn Sojourn, marking the first time a Seabourn ship has been in Alaska in 15 years.

The program will offer 11-, 12- and 14-day itineraries from Vancouver and Anchorage (via Seward). The itineraries will include ports rarely called upon and will be possible with Seabourn Sojourn’s size and maneuverability.

Details appeared  in the November 17 edition of Cruise News Daily.

The 55,820-ton Pacific Eden (formerly Statendam), now a member of the P&O Australia fleet, arrived in Australia for the first time over the weekend and departed on its maiden cruise.

This cruise is a special maiden voyage because it is taking the ship to Sydney where it will be christened on November 25.

The complete story appeared in the November 16 edition of Cruise News Daily.

Yo Ho Ho and a Bottle of Beer

Locally-brewed craft and microbrewed beers are a hit on Carnival ships, and cruisers aboard Carnival Pride from Baltimore are now going to be taking a little bit of home with them with the addition of Heavy Seas Beer to the ship’s bar menu.

Now Loose Cannon and Crossbones beers from Heavy Seas Beer will be carried on cruises from Baltimore.