Frankly what attracted us to this Philadelphia Inquirer article is the stunning photo of SS United States, stored in Philadelphia, as seen from all places, the IKEA store. 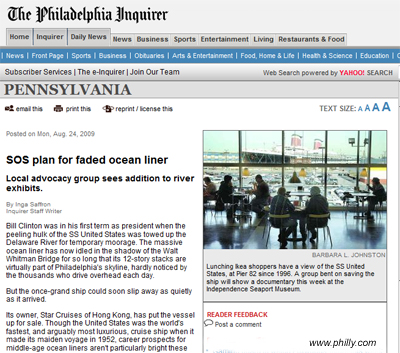 The classic liner was acquired for NCL America when the line planned to expand their American-flagged operation. Market conditions never allowed the line to expand, and the cost of rehabilitating the ship has continued to escalate. With the change of ownership structure of NCL America, ownership of the vessel recently reverted to Star. They see no use use for the ship in the foreseeable future, and even simply storing it is a tremendous cash drain, so they put it on the market some time ago.

The subject of SS United States' future has come up in many of CND's interviews with NCL and Star management over the years since it was acquired in 2002. The principals seem to have a real understanding of both the business and historic value of the vessel, some of them taking a real personal interest. Although most outsiders don't believe it, we believe scrapping the ship, just to get rid of it, would be a last resort for Star.

As the Inquirer article indicates, there are people trying to raise money to purchase the ship, but that's only a tiny portion of the problem. If it were just a matter of buying the ship, there are a number of sources that could probably raise the cash quickly. The major battle would then be what to do with the ship. The cost of maintaining it is phenomenal.

The BBC reports that a couple visible changes were made to ready QE2 for it's trip to South Africa where it will be used temporarily for a hotel.

To comply with maritime law, the homeport of Southampton had to be removed from the ship's stern, and the "Cunard" brand had to be removed from the sides to comply with the terms of sale from Cunard. The changes were required since it is being taken out to sea. They had been left there (and presumably restored once the ship returns home to Dubai) to preserve the authenticity of the ship as a museum.

The new owner, Nakheel, still plans to eventually convert QE2 into a hotel and entertainment center permanently moored at Dubai. The deployment to Cape Town is planned to last 18 months.
. 8/29/2009 11:07:00 AM

Southampton to Have Busy Weekend

The Daily Echo reports the port of Southampton is going to have what they consider to be a busy weekend. They will have nine large cruise ships in port over this weekend. The port expects huge crowds coming out to see the ships. Not only that but they are actually free running bus tours.

A small boat from the Key West Coast Guard station evacuated a 76-year-old man from Carnival Liberty Friday morning about 7:00am when it was about 20 miles south of Key West.

The US Coast Guard received a call from Carnival Liberty Thursday night (Aug 27, 2009) about 11:00pm while it was en route from Cozumel to Miami saying a passenger was suffering from cardiac arrest and needed to be transferred to a shoreside medical facility. The ship was about 260 miles southwest of Key West at the time. A rendezvous was set up for Friday morning as the ship passed near Key West.

The man and his wife were picked up in the Coast Guard vessel and transferred to a medical facility in Key West, as shown in the photos below. 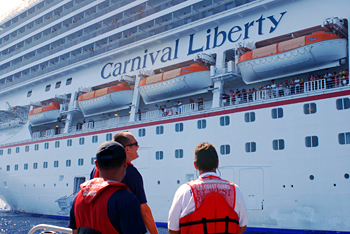 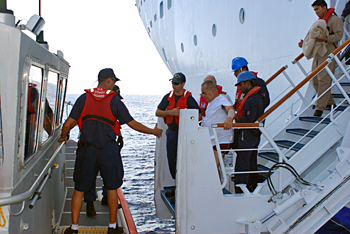 On Monday Cruise News Daily told readers how Norwegian Cruise Line had opened a waitlist for Norwegian Epic's first revenue cruise, which will be a transatlantic crossing. The 150,000-ton ship is a new concept vessel currently under construction at the STX Europe yard in St. Nazaire, France.

The delivery date is not yet finalized so NCL has not yet set the crossing's itinerary, dates, the length or even where it will begin or end. All that they can confirm is that it will be in the early summer sometime before the July 17 (2010) inaugural cruise from Miami, and the lead rate will be $699.

Passengers can be put on a waitlist for the crossing, and will be contacted when the details are set this fall. Since the waitlist was opened this week, the line reports strong demand for space on the list, signaling unprecedented interest in the new ship, according to the line.

“We’ve seen great demand for the waitlist so far, as these guests will have the first priority to book this cruise before we open it to the general public,” said Andy Stuart, executive vice president of global sales and passenger services for NCL.

Houston's new Bayport cruise terminal, which was completed a couple years ago, still sits empty waiting for a cruise line to homeport a ship there. Click2Houston (KPRC NBC) has a report on the $81 million facility that was built before they had a cruise line committed to cruise from there.

They take a rather critical view of building the facility, but in today's environment, cruise lines aren't about to commit to serving a port when no terminal is actually in the pipeline, even a temporary facility. Houston took the approach that rather than build a temporary terminal and then quickly replace it with a permanent one, they just went right for the permanent one. As the report fails to point out, it takes time to market to cruise lines, and then once sold, it takes a couple of years before the first ship comes. There's plenty of competition for ships, and having a turnkey operation such as Houston now has, gives Houston a decided advantage in the game.

A passenger from Norwegian Sky died at Great Stirrup Cay on Thursday (August 27) in an apparent accident. It took until this morning, however, to locate his body. Great Stirrup Cay is Norwegian Cruise Line's private island in the Berry Island chain of the Bahamas.

The man and his wife were walking on rocks along the shore on a remote part of the island, away from the area where most passengers tend to stay, when he fell into the
water according to witnesses.

Norwegian Sky has stopped at Great Stirrup Cay as the last call on a 4-night cruise which left Miami on August 24.

This is another case of a cruise passenger who declined to purchase travel insurance and then needed it. The story comes from WPTV in West Palm Beach about a family sailing aboard Carnival Valor which stopped at Grand Cayman. Briefly, the woman had a medical procedure on her heart before going on the cruise which involved a small incision, and it began to bleed. Apparently her doctor told her just to put a bandage on it, and it was nothing to worry about. That's when the ship's doctor got involved and sent them to a hospital on Grand Cayman. He apparently didn't want to set out on an overnight leg of the trip to Roatan (where shoreside medical assistance may be less sophisticated) with the possibility of further complications arising with her heart. The hospital on Grand Cayman wouldn't release the woman in time for the ship to sail, and Carnival wouldn't let her back on the ship without a release from the hospital. The family had to fly home on their own.

Granted, this is probably one for the lawyers to settle, but the out-of-pocket expense could have been avoided if she would have purchased a comprehensive travel insurance policy.

Details are in the WPTV text story or video below.

Meyer Werft laid the first block of Disney Dream's keel today at their Papenburg (map) yard. Disney dream is the first of a pair of 128,000-ton vessels on order for delivery in 2011 and 2012.

As you might expect from Disney, the ceremony was not your typical low-key keel-laying. 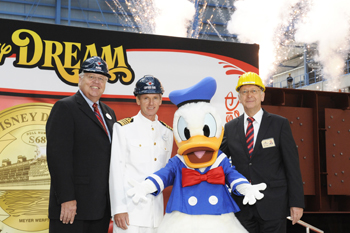 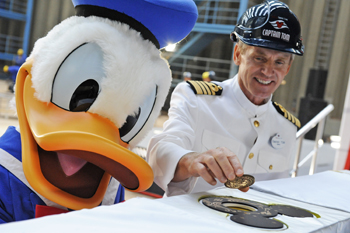 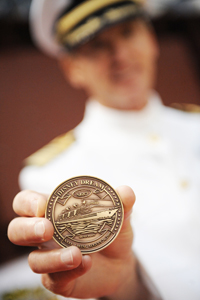 Disney's Captain Tom Forberg shows the special Disney "good luck" coin that was set before the first block was lowered onto it. Captain Donald looked on and vowed he would never sail the ship to Peking.
. 8/26/2009 05:00:00 PM

Dominica News Online reports that the island's number of cruise visitors has increased despite the global financial crisis, according to Dominica's tourism minister. Not only are they expecting an increase in the number of cruise ships calling, but they also expect the number of visitors disembarking to show a whopping 30% increase this winter from 500,000 to 650,000. Another interesting point to note in the article is that Dominica has one of the highest percentages of passengers disembarking of any port in the region.
. 8/26/2009 03:05:00 PM

Oasis of the Seas Fitting Out Continues

Royal Caribbean Chairman Richard Fain was at the STX Europe yard in Turku (map) last week and took some pictures of Oasis of the Seas as its interior moves toward completion. He published the photos on his blog.
. 8/25/2009 12:33:00 PM

Ship pilots at Galveston have suddenly withdrawn a request for an increase in their rates. They had wanted an overall 5% increase in their net pay, but had earlier agreed to reduce the number of pilots they require on cruise ships from two to one. (They were only charging 50% for the second pilot, by the way.) To compensate for the loss of that income, they were proposing a 7.1% increase on their fees to guide cargo vessels, which would then average out to the 5% increase in the average pilot's paycheck.

The cargo lines then balked at that, feeling they were being treated unfairly when they cruise lines' rates would effectively go down, and they threatened a lawsuit.

Literally minutes before the Board of Commissioners was to vote on the increase, they pilots withdrew their request, saying they didn't want to bear the expense of defending their position in a court battle.

A 62-year-old woman passenger was medevaced from Carnival Paradise Sunday (August 23). This Coast Guard video gives a little different perspective than we normally get (from what's happening inside the helicopter).

The operation occurred above Carnival Paradise around 5:15pm Sunday afternoon about 25 miles west of Point Loma (California). The ship had earlier notified the USCG that the woman was suffering from a head injury and needed to be transported to a shoreside medical facility. The Coast Guard dispatched a MH-60J Jayhawk helicopter to meet the cruise ship. After arrival at the hospital, the woman was listed as in stable condition.
. 8/24/2009 07:30:00 AM