We’re closing out the week with five smaller stories that you probably haven’t heard about, but we hope our subscribers will find them interesting:

+ Just in time for the holidays
Your shopping worries are over, at least for the Princess passengers on your gift list.

+ Keeping it British
When you’re naming a ship with the name of Britannia, it just wouldn’t do to use champagne, which must be from France, so P&O cruises has chosen a British sparkling wine with which to name the ship.

+ Cuba cruise surge continuing
The island nation of Cuba has been trying to rebuild their cruise industry (for port calls) since 2006, and this year they are experiencing a boom.

Quantum of the Seas Officially Named

Royal Caribbean's new Quantum of the Seas was named in New York Harbor this evening by actress Kristin Chenoweth. 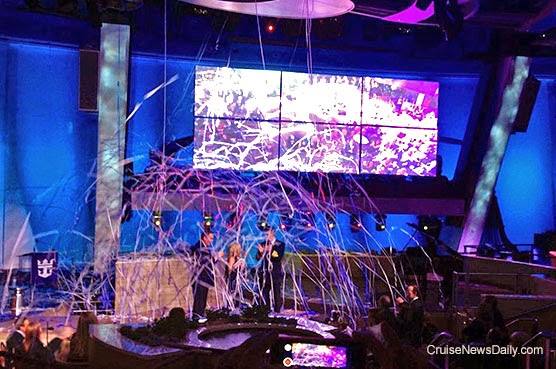 Photo courtesy of Royal Caribbean International. All rights reserved. May not be copied or used without permission.
. 11/14/2014 07:02:00 PM

Email ThisBlogThis!Share to TwitterShare to FacebookShare to Pinterest
Labels: Quantum of the Seas, Royal Caribbean

* Not Much Celebrating
Things don’t seem to be looking good for anything connected to Celebration Cruise Line, the operator of Bahamas Celebration which struck an object while leaving Freeport on October 31, opening a 10-foot by 30-inch hole under the waterline.
The ship did not return to service today as the line had implied it would, and worse yet, they don’t seem to be expecting it to return anytime soon.

* Other Things You’ll Want to Know
CND subscribers also read about sailing as fast as we can ... and Korea enjoying the Asian cruise boom.

The first ship of Holland America's new Pinnacle-class, Koningsdam, will go into service in February 2016, and Holland America is giving us the first look at the Adam Tihany interiors.

Additional renderings can be found on our Pinterest board.

WASHINGTON, Nov. 12, 2014 -- The Board of Directors of Cruise Lines International Association (CLIA) has appointed Adam Goldstein as Chairman as of January 1. In a normal rotation of duties, Goldstein, President and COO of Royal Caribbean Cruises Ltd., will take over from Howard Frank, Chairman of Costa Crociere S.p.A., who has served as CLIA Chair since 2010.

"The cruise industry today is a global industry, and under Howard's leadership CLIA became a world-class global association," said Goldstein. "I'm honored to take on this new role, and I look forward to continuing Howard's vision of a unified industry working together to ensure the safety and well-being of our passengers and crew, while encouraging a larger share of leisure travelers to consider the exceptional vacation experience that taking a cruise offers."

Under the chairmanship of Frank, CLIA implemented the association's new global structure under a unified mission of "One Industry, One Voice." The association also expanded its offerings and value to travel agent Members, and to destinations, ports, and industry suppliers under its Executive Partner membership program.

"It's been a privilege to work alongside Howard to achieve the Board's vision for the cruise industry's association," said Christine Duffy, CLIA president and CEO. "The worldwide prospects for growth in the cruise industry are unprecedented, and under Adam's leadership I'm confident that CLIA will be well-positioned to help all of our members seize every opportunity."

The past decade has seen a 77 percent increase in the popularity of cruising, to a record 21.3 passengers worldwide in 2013. On a global basis, the cruise industry was responsible last year for $117 billion in total spending that supported more than 891,000 jobs paying over $38 billion in wages.

About CLIA
Cruise Lines International Association (CLIA) is the world's largest cruise industry trade association with representation in North and South America, Europe, Asia and Australasia. CLIA represents the interests of cruise lines and travel agents before regulatory and legislative policy makers. CLIA is also engaged in travel agent training, research and marketing communications to promote the value and desirability of cruise holiday vacations with thousands of travel agency and travel agent members.

* One Time Only
Last week I told you about the unique connection between Princess Cruises and “The Love Boat” which I learned so much more about at the naming ceremony. But I haven’t told you much about the evening’s program itself. It was  interesting for those of us who follow (or lived) history of the industry because the program was mostly paying homage to Princess’ 50th anniversary - and things happened there that we probably won’t see again.

Photo courtesy of Royal Caribbean International. All rights reserved. May not be copied or used without permission.
. 11/11/2014 11:59:00 PM

* What Did Your Dog Find Today?
Celebrity passengers aboard Celebrity Equinox on November 21 will have a rare dining experience, thanks to Celebrity promoting the fine dining opportunities aboard their ships.

* Costa Diadema Opens New Savona Facility
Costa Diadema arrived for the first time at Savona (near Genoa) on Saturday. It was not only the ship’s maiden arrival at the port, but it also opened the new nine million euro cruise terminal (the second) at Costa’s Palacrociere.

Photo courtesy of Costa Crociere. All rights reserved. May not be copied or used without permission.

Royal Caribbean's newest,most technologically advanced ship, Quantum of the Seas, arrived at its home port of New York for the first time early this morning. We thought this was a different perspective.

Photos courtesy of Royal Caribbean International. All rights reserved. May not be copied or used without permission.
. 11/10/2014 11:31:00 PM