RCI Rolling Oasis Features Back to Freedom and Liberty

Earlier this week we talked with Lisa Bauer, Royal Caribbean's SVP of Hotel Operations, about changes the line is making aboard Allure of the Seas to keep it slightly different from its sister, Oasis of the Seas. Today she is telling us about new Oasis-like features she is rolling backward onto Oasis' "little" sisters, Freedom of the Seas and Liberty of the Seas.

CND subscribers also read about the beginning of another summer of crew members being arrested in Halifax for carrying child pornography into Canada ... new visa rules in Bermuda causing problems for some passengers and crew members ... with the start of regular cruise service, there's a new more consumer-friendly website for the Port of Palm Beach ... and hard times at the Port of San Diego.

* A Reasonable Facsimile, but No Carbon Copy

Royal Caribbean's Senior VP of Hotel Operations Lisa Bauer has a countdown clock above the door of her office. Today it says 172 days and several hours, counting down the minutes until the delivery of Allure of the Seas, the sister to Oasis of the Seas. It's crunch time for Bauer as she deals not only with staffing the new ship and all the other things that go along with accommodating another 6,000-plus customers every week, but she's also dealing with a number of new features which will make their debut aboard Allure - things that don't exist on Oasis or any of her other ships.

Yesterday, Bauer spent some time detailing for our readers some of the changes aboard Allure of the Seas that will set it apart from her sister.

May 13 - The Yachts of Seabourn has chosen '60's supermodel Twiggy as the godmother for Seabourn Sojourn.

Twiggy will name the new ship in what promises to be a glamorous ceremony in the River Thames on June 4. On June 5, the line has donated the use of the ship to Breast Cancer Haven as the venue for a fundraising event to celebrate the charity's 10th anniversary.

* And You Thought It Was All about Little Brown Furry Fruit

If you fly halfway around the world (or even if you don't) for a cruise to a place you've never been, it's nice to be immersed in the destination. It's nice too, if the cruise is different - to set it apart from all the other cruises you've been on. And that's just what Princess is trying to do on their series of 18 cruises this year between Australia and New Zealand.

Princess will operate a series of cruises from Australia to New Zealand with their two Sun-class ships during the austral summer of 2010-11. While most of the passengers will be sourced from Australia, a significant number of North Americans are also finding their way to the series of sailings because of the unusual itineraries. For both, Princess is creating an onboard product for these cruises that will set them apart with "everything New Zealand," and make the passengers feel like they have already arrived on the islands.

CND subscribers also read about Royal Caribbean ending art auctions on their ships ... Mississippi Queen being sold ... How the dispute between the cruise lines and the pilots at Galveston was settled ... the beginning of a new era for Carnival Cruise Lines in Alaska (and Seattle) ... and the recipient of the Bern Laxer Award of Excellence in Tampa.

The complete article appeared in the May 11, 2010, edition of Cruise News Daily.

Silversea's luxury adventure ship Prince Albert II had a little problem in the UK last night that ended up "detaining" its departure due to the ship being overloaded with supplies and problems with record-keeping.

The story of a wedding that went wrong aboard Carnival Sensation.

Remember the old Newhart show where Dick and Joanna go to Joanna's sister's wedding? Neither really wants to go, because it's on a cruise ship and they have to drive all night to get there. Joanna keeps telling Dick it will be fun, and she wants to be the first to toast her sister after her marriage. She keeps enticing Dick by telling him how they are going to have dinner on the cruise ship and cruise ships are known for their sumptuous food. When they get to the port, they find out the wedding has been delayed by hours because there is a bomb threat against
the ship, but the wedding coordinator keeps telling them everything will go on, but it will just be delayed. Dick is grumbling, but Joanna keeps reminding him of the wonderful pre-wedding buffet they will have and the open bar.

When they finally got on the ship, the buffet was served, and just as he is about to take his first bite, the wedding coordinator announces they have to get to the chapel immediately because the captain says they are going to sail in a half hour. So everyone rushes to the chapel for a ceremony that gets compressed to six minutes, and then they hurry to another lounge for the "reception." When they get there, they find it's a muster station and people are milling around with their lifejackets on, eating their reception food! Joanna keeps telling everyone, "Don't worry. In a few years we'll laugh about all this." And then her big moment arrives. As soon as Joanna raises her glass of champagne and says, "To my dear sister," an announcement comes on the PA that says, "All ashore who are going ashore," and everyone rushes off.

You don't remember that episode of the classic '80's sitcom? Oh, I'm sorry. That wasn't an episode of Newhart. That's pretty close to what really happened to a couple about six weeks ago who had planned their wedding aboard Carnival Sensation.

They contacted their local TV station's consumer help line, because Carnival was only giving them a 50% refund. You can read the whole article on WKMG's website. There's video, and the couple does seem unhappy, but smiling. (Their relatives who have posted comments to the story seem quite a bit less gracious, which is rather odd since it wasn't their wedding - they were only inconvenienced.)

Obviously, the cause of the situation (the bomb threat) was out of Carnival's control. If anyone failed, it was the wedding coordinator who was probably just trying to give the couple everything they wanted. Instead he/she should have stepped in and said there wasn't time for everything and given the couple the full wedding ceremony they had planned and a quick (and quiet) reception - and promised a refund for everything else.

The WKMG story says Carnival promised to review the situation with the refund. Carnival told CND today that they did the right thing for the couple and adjusted the refund so the couple would have a full refund of the approximate $2,500 they paid for the wedding.

As Joanna Loudan would have said, they will laugh about it in a couple of years. (This may not have been the most important story we will cover this week, but we can laugh about it now.)

Mariner of the Seas to Sail from Brazil

Brazil is one of the fastest growing source markets for cruising. Most lines which base ships there to tap the market report that demand easily exceeds the number of berths they can commit there each year. A couple of weeks ago when Royal Caribbean said Mariner of the Seas would be leaving Los Angeles and would be positioned in Europe for the summer of 2011, they said it would have a short Brazilian season along the way, but didn't elaborate.

Today, they filled in that hole, and detailed the program which will help close the gap - at least for a few weeks - between demand and supply in the Brazilian cruise market. Including the series of sailings in the ship's schedule also indicates how important Royal Caribbean sees this international source market. 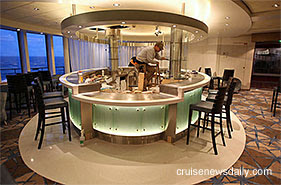 Celebrity Constellation departed Amsterdam yesterday with a whole new look. It's been "Solsticized!"

The 2002-built ship has been revitalized with many of the line's newest features found aboard the line's Solstice-class ships which are proving so popular with passengers.

* It Will Be a Breeze for Carnival

CND subscribers also read about four unusual medical evacuations from cruise ships over the weekend (Norwegian Jewel, Carnival Inspiration, Carnival Glory & Carnival Pride) ... a long-distance extension (in Australia) for Princess' new Bon Voyage program ... and a high stakes game of chance aboard Carnival Destiny, where the finals will be held for the third annual PokerPro Challenge. (Contestants may qualify in the casino of any Carnival Cruise Lines ship.)