Pretty soon there will be a special place to drink on Celebrity’s Solstice-class ships. It won’t just be a bar, but a “World Class Bar.” Its specially-educated bartenders will be dispensing “luxurious drink experiences” consisting of high-end cocktails, craft cocktails and “rituals” available only aboard Celebrity.

The partnership between Celebrity and Diego Global Travel Americas began recently with the opening of the first World Class Bar aboard Celebrity Eclipse, but it will soon expand to the other four ships.

The Final Piece of the Puzzle

A cruise ship is constructed of giant preconstructed blocks, and the blocks are fitted together in the dry dock. Once the final one is in place. the ship can be floated and towed out of the dry dock to a finishing dock, making space for another ship to be built or repaired.

The final block of the 133,500-ton Carnival Vista was put into place this week at the Fincantieri yard in Monfalcone (Italy). The ship is scheduled for delivery next spring. 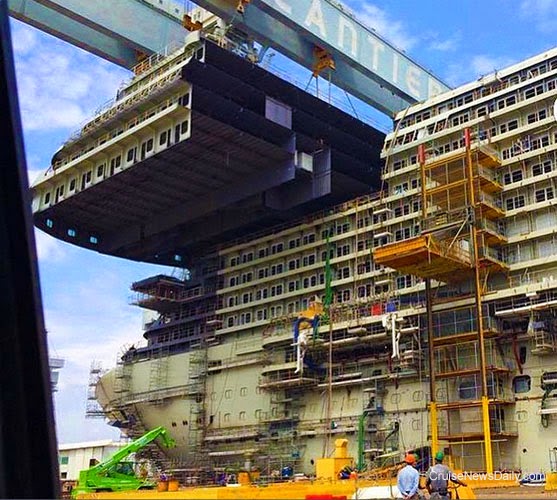 The Allure of a Birds Eye View

This photo, showing Allure of the Seas at the end of its dry dock last week in Cadiz (Spain), was tweeted by Royal Caribbean. It's a still from a video by UAV Aerials, which is a company that specializes in video productions shot with drones for very unique perspectives. 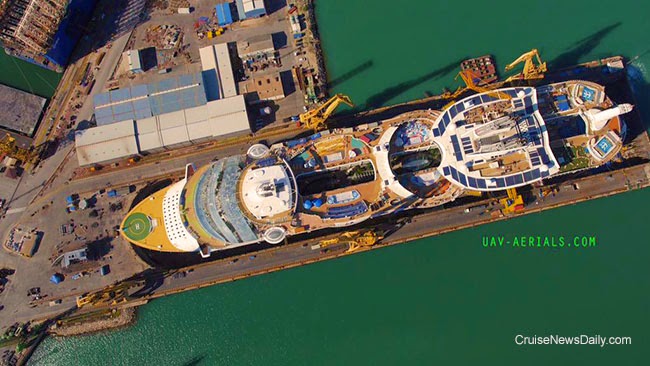 Photo courtesy of Royal Caribbean International and UAV Aerials. All rights reserved. May not be copied or used without permission.
. 5/22/2015 09:09:00 PM

Allure of the Seas Returns to Service

Royal Caribbean's Allure of the Seas returned from its routine dry dock this week to begin its Mediterranean program. It is shown below at Civitavacchia (the port for Rome) during its first call today (center ship). It is seen alongside Costa Fortuna (left) and CDF's Zenith (right).

Photo courtesy of Royal Caribbean International. All rights reserved. May not be copied or used without permission.
. 5/21/2015 09:46:00 PM

In their new roles, Biencourt and Poulsen are responsible for planning, positioning and strategizing how to price and sell Holland America Line’s worldwide cruises. Both directors report to Beth Bodensteiner, senior vice president, revenue management.

“Carole and Justin bring a tremendous amount of knowledge, creativity and analytical skills to their respective pricing and demand teams, and we’re thrilled to have them in their new leadership roles,” said Bodensteiner. “We congratulate them both on their well-earned promotions.”

Biencourt, who began her career with Holland America Line more than 30 years ago, most recently was senior manager, revenue accounting, where she supervised a team of 10 employees. During her time with the company, she has risen through several analytical roles serving the marketing and finance departments.

Poulsen joined Holland America Line in 2010 and most recently was senior manager, deployment and itinerary planning, where he conceived, designed and implemented global deployments for the company’s fleet of 15 ships.

A seasoned senior executive leader, Ostebo has more than 30 years of experience leading large, sophisticated and complex organizations. He joins CLIA from the United States Coast Guard where he served as Rear Admiral. Most recently, Ostebo was Director of Strategic Management where he supported strategy and budget policy for the Coast Guard. Ostebo also served as Commander for the Coast Guard 17th District and led all Coast Guard Operations in Alaska, the Arctic and North Pacific where he was responsible for protecting life and property, enforcing federal laws and treaties, preserving the living marine resources and promoting national security.

“After a thorough search process, we are thrilled to announce the appointment of our new President and CEO, Thomas Ostebo,” said Global CLIA Chairman, Adam M. Goldstein. “Tom brings years of outstanding maritime and strategic business leadership experience to this important position that leads the cruise industry’s global association. We are confident CLIA will thrive under his direction for years to come. More importantly, Tom’s strong communication skills and energy made him the ideal person for this role.”

Ostebo will lead CLIA’s work to help all its members succeed and unify, represent, advocate and promote the common interests of the global cruise industry. Among his priorities, he will continue to enhance the Travel Agency, Individual Travel Agent and Executive Partner member programs that were introduced in fall 2014, as well as the new Travel Agent professional development training. Ostebo will be located at CLIA global headquarters in Washington D.C., and work with CLIA’s 15 offices across the globe, including Abremar-Brasil, Alaska, Australasia, Belgium & Luxembourg, Europe, France, Germany, Italy, Netherlands, North America, North Asia, North West & Canada, Southeast Asia, Spain and UK & Ireland.

“I am incredibly humbled, honored and excited to join an industry with such a rich history of success and growth. This appointment is a perfect next step in my career as it allows me to leverage my experiences and passions, from leading large complex teams to advocating for marine resources,” said Ostebo. “CLIA currently has a strong foundation and outstanding senior leadership, so I look forward to building upon this and providing new strategies and approaches to move CLIA and the cruise industry forward. Ultimately, my goal is to perform meaningful work and build strong relationships.”

The appointment follows the departure of Christine Duffy, former CLIA President and Chief Executive Officer, on January 31, 2015. CLIA relied on the services of executive search firm Heidrick & Struggles to lead the search for a new President and CEO.

If It Works in Europe It May Work in the Caribbean

After another day of checks and certifications, Norwegian Dawn was pronounced fit to sail, and it left for Boston this afternoon. It is expected to arrive Friday as scheduled, and the next cruise will depart on time.

The line said the damage to the ship amounted to some superficial scrapes on the hull. They determined the cause of the steering malfunction yesterday was a spare oil pump which had been installed with the pressure set incorrectly.

Details appeared in the May 20 edition of Cruise News Daily.

Update 11:15pm EDT - Norwegian Dawn ran aground while leaving Bermuda this afternoon.The ship lost power briefly which caused it to lose propulsion temporarily and it made contact with the sea bed.

The ship's officers and an independent dive team have confirmed the structural integrity of the ship. Norwegian Dawn was refloated and moved to an anchorage where it will be reinspected again on Wednesday before sailing to Boston. The ship has full power and all onboard services are continuing normally.


Norwegian Dawn was on a seven-night cruise from Boston.

Details are in the May 19 edition of Cruise News Daily.

For the last three years, the Denali Princess Wilderness Lodge has received part of the catch and served fresh king salmon to lodge guests on arrival, just hours after the fish were swimming in the river. This is the story of how it happens.

Disney has a way of keeping everybody happy. Not only do their ships sail to various popular cruise destinations, rotating every year, but they also change up home ports every season so every couple of years they are sailing from a home port near your home.

Today Disney released the late 2016 (fall) deployments for Disney Magic and Disney Wonder. If you want to sail from New York, Miami or Galveston this fall, you’re in luck because Captain Mickey will be dropping anchor in your port.

Details appeared in the May 18 edition of Cruise News Daily.

A 10-year-old girl drowned in the swimming pool aboard Norwegian Gem on Sunday as it was traveling from New York to Port Canaveral.
The complete story appeared in the May 18 edition of Cruise News Daily.
. 5/18/2015 11:57:00 PM

Coral Princess Suddenly Has a Vacancy

A 31-year-old man from Maryland arrived in Juneau Saturday morning aboard Coral Princess and was planning on going on a whale watching excursion. He was traveling with his parents and his younger sister. When he came down the gangway, however, he didn’t get very far. Juneau police were waiting for him and took him into custody on charges connected to a burglary and double murder back in Maryland.