Dividing up the Pie

There's been a lot of coverage of growing home ports in the southeastern states - Charleston (SC), Jacksonville, and Mobile. Each is working to some degree or another for more or larger ships, and still other ports are marketing themselves to cruise lines looking for their first ship. Generally, there's excitement in those ports.

But for all the excitement there is in those ports, there's a bit of uneasiness a few hundred miles to the south in the larger ports of Port Canaveral and Tampa.

* Let There Be Light
Norwegian Epic is now home to the largest LED chandelier ever installed on a cruise ship. The three-week process was completed at the STX Europe yard in Saint Nazaire (France) where the ship is in the finishing process for handover later this month. A larger photo appears in a newsfile on the CND website.

Twiggy Becomes a Godmother and Royal Caribbean Links with Dreamworks

Pushing the Envelope - with a Guitar

Norwegian Cruise Line announced the latest addition to their lineup of entertainment options for Norwegian Epic, and it's one that may cause you to scratch your head. For just $10 a day, you will be able to rent a Gibson guitar to play in the privacy of your cabin aboard NCL's newest ship.

This may not seem too newsworthy, and in reality, it's probably not, but it is another sign that it's going to be "different out there" (to quote an old, old NCL advertising slogan) on Norwegian Epic.

In this CND article we see how NCL is continuing to expand the appeal of Norwegian Epic to a market beyond the traditional cruise market - one that is used to vacationing a very different way.

* Other Things You'll Want to Know
CND subscribers also read about ...
+ a passenger who liked Belize so well he just though he'd stay ...
+ a new "no jacket required" policy in a new place on NCL - NCL no longer requires passengers to wear life jackets during muster drills fleetwide, except on Pride of America ... truly Freestyle Cruising ...
+ British inspectors detaining another ship for safety violations ...
+ and Crystal scheduling a jazz cruise in the Caribbean.

Celebrity Cruises has a new celebrity chef program that launched this week called "Savor Your Destination." Unlike other celebrity chef theme cruises, Celebrity's twist is that their program won't be a "name" chef doing a cooking demonstration, and a special menu one evening which he has put his stamp of approval on. Instead, Savor Your Destination promises much more interaction with the chef at various events, as well as a chef-created menu. 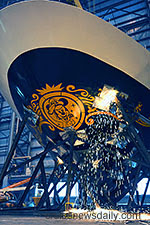 * Other Things You'll Want to Know
CND subscribers also read about Carnival again declaring a dividend for investors ... Bermuda putting out the welcome mat hoping to mend fences for a special group ... Mitsubishi readying a return to building cruise ships ... and AIDA planning way in advance for a christening extravaganza.

Royal Caribbean International released some enhancements to their Crown & Anchor Society loyalty program for past passengers today, the first of several announcements to come. If you were expecting more free stuff - free meals in the specialty restaurants, big discounts on your bar bill, or special treatments in the spa - you'll be disappointed.

What comes with this first announcement are some services, which Betsy O'Rourke, RCI's SVP of Marketing, says have been requested by members, and the company has heard them. The changes have come as the result of several months of talking to past passengers asking what they want in the C&A program.

The Role of the Travel Agent?

When Royal Caribbean announced some of the enhancements to their Crown & Anchor loyalty program, many of them were connected to booking subsequent cruises onboard their current cruise. "Our members like to book onboard," Lillian Murphy (RCI's VP of One-to-One Marketing) said. "That is something that has come through very clear from them."

That surprises me for a couple of reasons. In this CND article, we look what Royal Caribbean says their customers are saying about the role of the travel agent in the transaction.

She's Ready for Her Close-Up

Remember when Sea Princess went in for her drydock last September in San Francisco? Maybe you followed it on Princess' Drydock Journal of Flickr photostream that we told you about in CND. Thursday night, the National Geographic Channel is going to give you an opportunity to go even more in depth as some of the technical work is
being done.

This week, an episode of the series "World's Toughest Fixes" will show the series' host, Sean Riley, getting involved in some of the more unusual jobs in the drydock.

In one segment, he helps strip and power wash the ship's hull. In another he's working high up on the ship with another team which is sealing the windows. Then it's back to the bottom of the ship when he crawls inside the tail shaft housing to show viewers the mechanical work being done there. For a break, he also gets to try his hand at some of the upholstery work completed during the two-week time in drydock.

There are behind-the-scenes photos of the World's Toughest Fixes crew at work during the shoot are available on the Princess Flickr photostream.

The Other Side of Nieuw Amsterdam

Holland America has added some interesting new photos of the underside of their newest ship, Nieuw Amsterdam, to their blog. The ship is in drydock at Fincantieri's Marghera (Italy) yard following sea trials for hull painting. Nieuw Amsterdam will enter service in July.