* Costa Concordia Ready to Roll
If you haven’t seen Costa Concordia lately, you will be surprised. Most TV networks and newspapers have been using photos and footage that was shot more than a year ago. In them, the ship is lying on its side and looks much like it just lay down on its side for a rest.

In reality, if you see the photos taken in the last couple of months, you’d notice the ship is rusting, but the biggest change is that the exposed (port) side of the ship is almost completely obscured by the giant boxes (sponsons) affixed to it, which, once the ship is righted, will be filled with air and refloat the ship.


* This May Make You “Crane” Your Neck
You don’t usually see them in the pictures from the shipyards because they’ve been cropped out, but without them most pictures you see from the yards wouldn’t be possible. They stand on two giant legs straddling the dry docks and lifting the huge blocks of the ship into place.

These cranes are major pieces of the yards’ equipment. Because of their height (they need to stand at least several stories taller than the ships), they can be seen from the locale surrounding the yard and become something of symbols of the shipyard.   More 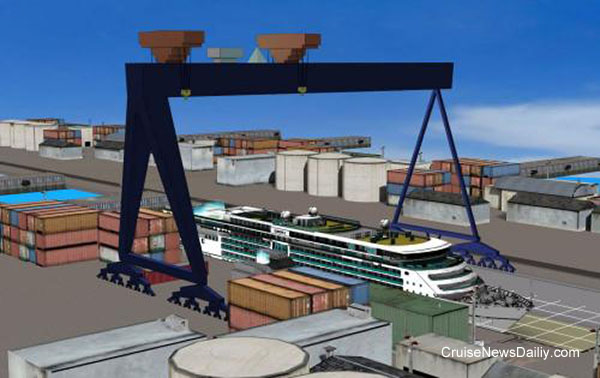 Assembly of a giant new crane has begun at the STX France yard in Saint-Nazaire. The new crane, referred to as TGP, will have almost twice the lifting capacity of the one it is replacing. Its first use will be in the construction of Royal Caribbean's third Oasis-class ship which will be built at the yard for delivery in the spring of 2016.

“We take our work so seriously here, and there is such commitment throughout our entire organization to give our guests the safest, happiest and smoothest vacation experiences we can,” said Lisa Lutoff-Perlo, executive vice president of Operations, Royal Caribbean International. “It’s a good feeling to know we are adding someone with Bill’s background to make our team even stronger.”

Recently retired from a distinguished 33-year career, RADM Baumgartner served as Commander of the Seventh Coast Guard District and Director of Homeland Security Task Force Southeast, with responsibility over 40 ships, more than 11,000 people and all Coast Guard operations in the Southeastern U.S. and Caribbean basin – an area encompassing more than 1.8 million square miles. RADM Baumgartner coordinated Coast Guard operations with 34 foreign countries and territories in addition to overseeing several thousand search and rescue missions, the confiscation of nearly $2 billion in illegal narcotics, and the safety and security of commercial shipping in a region that included the three largest cruise ship ports, six of the nation’s largest container ports, and three strategic military outload ports.

“I’m thrilled to be joining the Royal Caribbean team,” said RADM Baumgartner. “Royal Caribbean has an outstanding reputation not only for delivering the Wow Factor, but also for being an industry leader and doing things right. With my skills and experience, I believe I can be a driving force for growth and can help Royal Caribbean become even better.”

Just prior to the above role, RADM Baumgartner served as General Counsel (Judge Advocate General) for the Coast Guard, a $10 billion organization with more than 50,000 full-time and 40,000 part-time employees. He managed more than 250 attorneys in more than 15 offices worldwide and was the Federal Government’s lead maritime attorney. RADM Baumgartner began his career at sea and served as the commanding officer of two Coast Guard ships.

RADM Baumgartner holds Bachelor of Science Degrees in Marine Engineering and Electrical Engineering from the U.S. Coast Guard Academy, an MBA from the University of New Orleans, and a Law Degree from Harvard Law School.

* Carnival Scrubbing Up
Carnival Corp has received the support of the US EPA, the US Coast Guard and Transport Canada for the new scrubber technology in which they partnered in the development and plan to install it on their ships operating in the North American Emission Control Area (ECA).


* Costa Takes a Bow
The main part of the bow, the fore-end block, was laid in place today aboard Costa Diadema at the Fincantieri yard at Marghera, Italy, and now the ship really looks like a ship. Photos


* MSC Modifies Divina Smoking for North America
In line with smoking policies in North America, MSC is designating additional nonsmoking areas aboard MSC Divina when it leaves Europe for the Caribbean.

The fore-end block of Costa Diadema, one of the largest, was added to the ship this morning at the Fincantieri shipyard at Marghera, Italy. 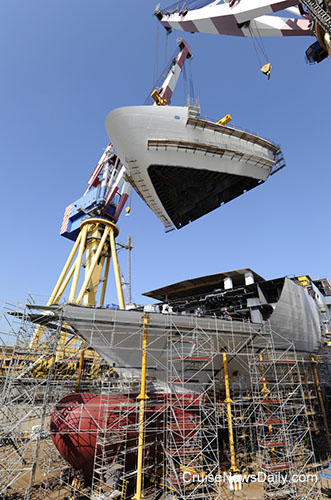 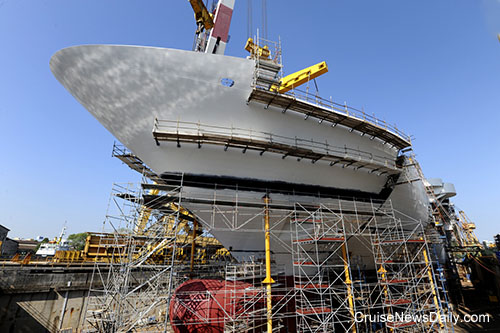 * A Fond Farewell
Seabourn is one of the few cruise lines that understands some customers, besides building a loyalty to the lines, also build an attachment to specific ships. With that in mind they have created a special farewell season for Seabourn Pride that will give longtime customers a chance to sail the ship once more and experience some special events from the past while saying farewell.

Seabourn has designated the 15 voyages from November 11 through the final sailing on March 30, 2014 as Seabourn Pride’s “Farewell Season.”


* Child Molester Prevented from Going on Cruise - Sorta
Police at Detroit Metro airport stopped a convicted sex offender and his wife from boarding a flight to Europe to go on a cruise last Wednesday. The 61-year-old man was convicted of groping a fifth grade girl in the grade school class he taught in 2003 and 2004. In a plea bargain, 15 additional counts against him were dropped, but eleven girls subsequently sued him, and each case was settled out of court.

But being a convicted sex offender and on the sex offender registry isn’t what kept him away from the kids on the European cruise.


* Report to the President’s Office
When Costa Voyager captain, Giovanni Cosini, got a message to report to the president’s office, he didn’t go to Costa’s corporate headquarters in Genoa. This time he headed to Tirana, Albania.

CND was not published on Monday, September 2, due to the Labor Day holiday in the US.

* Harvest Caye Contract Near Finalization with Changes
Belize and Norwegian Cruise Line are getting near to signing a final contract for the development of Norwegian’s Harvest Caye in the southern part of the country, but the Prime Minister says there are a couple of vitally important points that were inadvertently left out of the memorandum of understanding signed last month.


* Victoria Celebrates Milestone
A honeymoon couple from California helped the port of Victoria (BC) celebrate a significant milestone last Friday when they became the port's five millionth passenger.