What Do You Buy a Cruise Line for Their 50th Anniversary?

It's only a matter of days until the holidays and you know what that means? Right. It's time to start thinking about Alaska. No, not next summer, silly - in 2019.

It's going to be a special year because it's Princess' 50th anniversary there, and they are making it their largest deployment ever.

Details appeared in the December 8 edition of Cruise News Daily.

It's been no secret that at first it was kind of a bumpy ride for Carnival Cruise Line in Charleston. In general, the community welcomed them with open arms and is supportive and appreciates the positive impact they have on the region. There is a very vocal minority in Charleston that doesn't want cruise ships there, citing primarily the traffic, the noise, the pollution, the negative impact on tourism, and so forth, because of all the extra people in town on cruise days.

On the other hand, the Charleston market has been a very strong one for Carnival. Despite the haters, lots of people within driving distance of the city like to cruise. With that in mind, Carnival lobbed a bomb into Charleston today when they announced that is thrilling cruisers and most people that appreciate Carnival's impact, but it's sure to inflame the haters. In May 2019 Carnival will be replacing Carnival Ecstasy with the significantly larger (and more feature-rich) Carnival Sunshine.

A number of ceremonial events occurred today in anticipation of the ship actually being towed out of the dry dock on December 21.

The complete story appeared in the December 6 edition of Cruise News Daily. 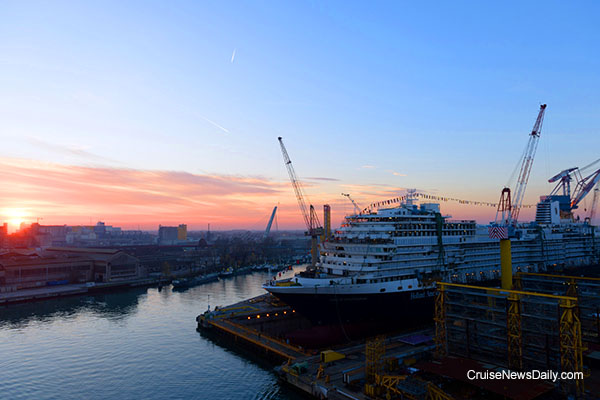 Details appeared in the December 6 edition of Cruise News Daily.

For Those Who Want to Stay Closer to Home

I Love a Parade

Carnival Cruise Line is turning the clock back a bit and reviving a cruise ship tradition and bringing back something passengers have missed over the last few years. The Baked Alaska Parade is coming back to main dining room. It was a tradition that was set aside when the flexible dining options were introduced a few years ago. Now the special dessert will return to the menu and be paraded through the dining room by a line of waiters before it is presented to the passengers and devoured within a minute or two.

That's only one item of a host of dining updates Carnival is rolling out across their fleet.

Something Extra for NYC