Windstar's Star Pride, on the way to its New York debut, lost power today for a time off the Massachusetts coast. That resulted in the loss of propulsion as well as regular hotel services.

The ship did have emergency power so it could maintain navigational equipment, essential safety systems, and basic comforts for the passengers and crew.

The complete story appeared in the September 7 edition of Cruise News Daily.

Despite all the technology like scrubbers and so forth, Alaska's Department of Environmental Conservation received at least ten complaints from citizens watching Norwegian Pearl dock at Juneau on Tuesday. They were complaining about the emissions coming from the ship's smokestack.

The DEC hasn't received the reports from their own observers yet, and they can't talk about whether or not they are in the process of issuing a fine.

It Was a Fall, but Now Is Called Murder

A January incident aboard Carnival Elation has resulted in a second-degree murder charge against one of the passengers.

On the January 18 sailing from Jacksonville to the Bahamas, a woman reportedly fell from her balcony on Deck 14 and landed on the Deck 11 where she was found dead.

The complete story appeared in the September 6 edition of Cruise News Daily.

Thanks to Carnival's thoughtfulness, you can now tell the world that you've gone “Hog Wild for Craft Brews.” Of course, that refers to the Parched Pig craft beer brewed aboard Carnival Horizon. 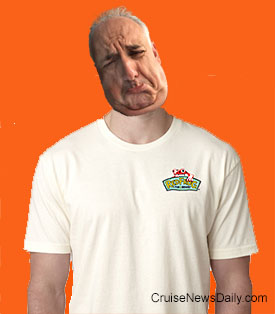 Details appeared in the September 6 issue of Cruise News Daily.

Picture calling the pizzeria to order your pizza and the owner tells you you're getting a special: One extra topping free. You'd feel like your ship had come in.

Your MSC ship has come in, because MSC is giving MSC Fantasia passengers one port free, and very appropriately for this analogy, it's Naples, famous for its pizza. Next summer, the line is adding a call at Naples to the ship's seven-night Mediterranean itinerary.

The complete story appeared in the September 5 edition of Cruise News Daily.

It Would Have Been a Better Story

A week ago last Monday, a US Coast Guard helicopter medevaced a 61-year-old male crew member off Celebrity Summit when it was some 230 miles off the New Jersey coast. But there was something extra in the press release that caught our attention and made this medevac more noteworthy.

Details appeared in the September 5 edition of Cruise News Daily.

Norwegian Getaway to the Rescue

A flash of light in the night darkness at sea, seen by a passenger aboard Norwegian Getaway, caused the cruise ship to notice a tiny boat with four people in it adrift in the Florida Straits.

That flash led to the rescue of the four Cuban nationals and their being taken to Mexico.

As you read in Friday's edition, AIDAnova was named in the Meyer Werft yard Friday night during a really splashy party, and it will go into service in November. That's something you don't see much anymore. (Remember how ships used to be built on dry land and you would see them slide down the rails into the water? Christening them with the champagne bottle is usually what triggered them sliding down the rails.) Then the interior work would be done, and months later they would be finished and go into service.

AIDA is a rather unusual Carnival brand in that it is marketed only in a relatively small geographic area, but it is one of Carnival's strongest brands because that area (Germany) is Europe's strongest travel market.

So Carnival Corp is promoting the arrival (shortly) of  AIDAnova and getting the word out because it is a rather important and unusual ship. It is the first cruise ship powered by Liquified Natural Gas (LNG) both at sea and in port. LNG is the cleanest burning fossil fuel, so it is going to be operating much cleanly than other ships of the same sizes (180,000 tons).

The complete story appeared in the September 4 issue of Cruise News Daily.

Princess has started a countdown until Royal Princess arrives at Los Angeles, the first time the ship, or any of its class has been on the US West Coast. It's just 200 days until it arrives (from South America) and begins a spring series of Princess' signature seven-night Mexican Riviera cruises on March 23, 2019.