* A New Queen Is Crowned
Tonight, Carnival has yet another major cruise ship in its fleet. Regal Princess was officially named on Wednesday in Ft. Lauderdale, and tonight, Costa Diadema was given its name in Genoa.

* Carnival Stocking Stuffers Everywhere
Carnival Cruise Lines has partnered with Blackhawk Network to distribute their gift card in more than 9,000 retail locations across the US.

* Surprise Maiden Call
Quantum of the Sea is on its inaugural sailing from Southampton to New York/Cape Liberty, and wasn’t supposed to be making any en route calls, but as things happen...

* They Get It
Last night was a really fun evening for a big segment of the cruise industry. Princess Cruises christened Regal Princess, but as much as it was about the excitement of a new ship, it was just as much about celebrating Princess Cruises 50th anniversary and a very special relationship with “The Love Boat” over most of those years.

* And Her Name is Regal
The original cast of “The Love Boat” christened Regal Princess tonight at Port Everglades. Prior to the ceremony, Princess created a fun tribute to the TV show which has been tied so closely to Princess Cruises by inviting its most frequent “passengers” to join in the celebration and recall their experiences on the show. It was like a Who’s Who of ‘70's television.
The ceremony itself paid tribute to the 50 years of Princess Cruises. When “The Love Boat” stars pulled the lever, it released 50 bottles of champagne to break against the hull of the ship, and then the fifty-first bottle was released on the Pool Deck to break just below the godparents.
There was just one small hitch. The bottle on the Pool Deck didn’t break, but everyone was having so much fun, it was like no one even noticed amid the rest of the celebration.
We’ll have a full report in Thursday’s edition of CND. 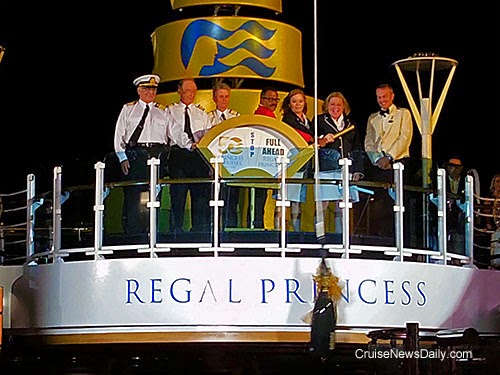 * Another US Warning
The US State Depart issued another warning to US citizens in the Bahamas this week. They are again warning of the rising level of violent crime in and around Nassau.
None of the incidents have involved cruise passengers, nor are they necessarily targeting Americans, but they are in the areas tourists frequent and have become bolder and more violent and in broad daylight.

* New Terminal Delayed
Florida Today is reporting that Port Canaveral’s new cruise terminal will be delayed in opening by a month due to construction delays.
The new Terminal 1 is now scheduled to open on December 27.

* Staying Connected via Apples and Oranges
Carnival Corp isn’t letting Royal Caribbean’s program with O3b go unanswered in a quest for a faster internet and the battle for Millennials who need to be connected. They have their own solution unveiled on Monday that will boost internet speeds by an average of ten times.
The program will be implemented by region. It is already aboard ten ships in the Caribbean, and by 2016 it will be on all 101 ships in the Carnival fleet on all nine brands.

* The Discovery of Princess
Princess has a new partnership with Discover Channels. You know them: Discovery, TLC, Animal Planet, Investigation Discovery, Science Channel. They probably produce some of your favorite shows like Mythbusters, Deadliest Catch, and the eagerly-anticipated annual event: Shark Week.
OK, Princess is going to carry a selection of Discovery Networks’ shows on their ships, but that’s kind of tame. Where the real news of this partnership is, is in Discovery At Sea, which will bring elements of the most popular shows aboard the ships.

* Accident Lays up Bahamas Celebration
Something opened a hole in the hull of Celebration Cruise Lines’ Bahamas Celebration Friday evening about 9pm as it was leaving Grand Bahama Island. There are conflicting reports as to if the ship struck an object or it ran aground, but it began taking on water and lost power.
The line has canceled sailings for at least the first two weeks of November.

* Other Things You’ll Want to Know
CND subscribers also read about Costa Victoria saving 12 from fire ... and found at last.