MSC's first world cruise doesn't sail until January, but MSC must have had such a good time planning it, they just had to plan another already, and this week they announced their second world cruise.

The 2020 version will sails in early January from four Mediterranean ports and immediately makes a southerly turn to travel around the world mostly below the equator. MSC Magnifica will visit 43 ports in 23 countries in 116 days.

Roll out the Red Carpet

There have been many firsts aboard Cunard ships, but this December, Queen Mary 2 is set to hose the first premier of a Hollywood movie when she is the setting for the world premier of the 20th Century Fox release, “The Greatest Showman.”

The movie, which is the story of P.T. Barnum and how he created the Barnum & Bailey Circus, stars Hugh Jackman, Michelle Williams, Zac Efron, Rebecca Ferguson and Zendaya.

Disney Cruise Line has set their schedule for the first part of 2019, and the line will have ships in the Caribbean and from March to May on Mexico's west coast sailing from San Diego.

Details appeared in the October 26 edition of Cruise News Daily.

Few of our readers will probably ever sail this 151,300-ton ship, so this might be your only glimpse of a newbuild for the Asian market. Meyer Werft delivered World Dream to Genting's Dream Cruises today in Bremerhaven at the conclusion of the ship's sea trials.

The complete story appeared in the October 26 edition of Cruise News Daily.

Photos courtesy of Meyer Werft. All rights reserved. May not be copied or used without express permission.

Royal Caribbean has set dates to return to San Juan and St. Maarten in addition to St. Thomas, which they announced plans for earlier. They also updated the status on a couple of ports that still aren't ready for their return.

Many Are Sailing but Few Are Chosen

When Carnival Corp announced Ocean Medallion, it sounded great, and they said it was going to be a “game changer.” Then they announced the initial roll-out schedule beginning with Princess Cruises, and said it was first going to be available on Regal Princess on November 17 of this year. Princess customers were excited to have an opportunity to glimpse the future of cruising.

The good news is that it still will be operating aboard Regal Princess in November, but the bad news is that most passengers are going to have to wait to have their “games changed.” Not everyone aboard the ship will be able to experience the enhancements Ocean Medallion will offer.

Norwegian Books Second Season Down Under

Length matters, especially when you're parking a ship.

That's why Port Everglades extended the slip at Terminal 4 as part of an $18 million project. The 900-foot slip was extended 225 feet to accommodate today's larger cruise ships, up to 1,100 feet.

The complete story appeared in the October 24 edition of Cruise News Daily. 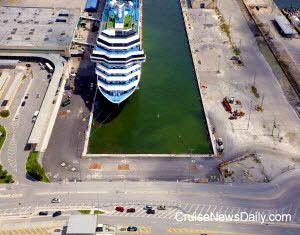 
Details appeared in the October 24 issue of Cruise News Daily.

Last spring we told you Cunard had scheduled a cruise through Alaska for the first time in 20 years when Queen Elizabeth will spend a week there as part of a repositioning cruise from Asia to North America in May 2019. Today, Cunard revealed that their Alaska program won't end there.

Queen Elizabeth will then sail four more ten-night round trip cruises from Vancouver to Alaska.

The Caribbean Is More Open for Business

Carnival has been working to get the message out that there was little storm damage in most of the Caribbean. But today, Carnival said they now have specific plans when they will return to islands where there was severe damage.

Longtime readers will remember the sinking of Louis Cruises' Sea Diamond at Santorini on April 5, 2007.

The 21,484-ton ship had hit a reef the day before and took on water. After evacuation, the ship was beginning to be towed when it sank in 300 feet of water.

The Greek government last week ordered the salvage of the ship in compliance with Greek law.

The complete story appeared in the October 23 edition of Cruise News Daily.