* Britannia Floats
While much of the world had its attention on flowers and romance today, Britain’s attention was on the Italian port of Monfalcone and a ship. This was the day P&O’s future flagship, Britannia, was being floated for the first at the Fincantieri shipyard.
The 141,000-ton Britannia may be a sister ship to Royal Princess and Regal Princess, but Britannia’s interior design and features will be all her own and reflective of modern British tastes through and through.  (More)

* Passenger Assaulted on Nieuw Amsterdam
A female passenger was allegedly assaulted by a crew member early this morning aboard Holland America’s Nieuw Amsterdam.

* Other Things You’ll Want to Know
CND subscribers also read about the big business of Allure ... and a rogue wave claiming the life of a cruise passenger.

P&O had an event in London Wednesday evening to give the trade a taste of the Britannia Experience. This video should do the same for you.

* Celebrity Confirms Century’s Departure - But for Where?
Celebrity Cruises finally confirmed that Celebrity Century will be leaving the fleet in the spring of 2015. It’s been an open secret that has kept the rumor mills churning, but they will have material for some time yet, because Celebrity has yet to confirm the disposition of the ship - if it is being sold outright or transferred to another RCCL brand.
The announcement came along with information about the ship’s “Farewell Season” celebrating the ship’s long career with the line during the last year in the Celebrity livery.

* Other Things You’ll Want to Know
CND subscribers also read about a baseball player on the DL ... and "an insult to the nation."

Photo courtesy of Royal Caribbean International. All rights reserved. May not be copied or used without permission.
. 2/13/2014 11:59:00 PM

* Celebrity Jumps into the Competition
Celebrity is jumping into the high-end accommodation competition and creating a number of exclusive facilities and services for suite passengers. All suites will fall into the new “Suite Class” on the ship, but not all the suite categories will qualify to use all the facilities.
The new Suite Class will be fully introduced beginning in April 2015.

* AIDA Takes Action
Last Friday, a German tourist ashore from AIDAluna on Venezuela’s Margarita Island was shot and killed during a robbery. This was too much for AIDA, and yesterday, German cruise blogs began reporting AIDA said they would cancel calls at Margarita Island for the rest of the season.

* Other Things You’ll Want to Know
CND subscribers also read about a new addition to Holland America's Culinary Council (more) ... and a new record for number of passengers at New Orleans. 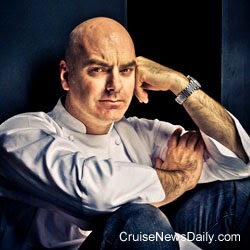 Seattle, Wash., Feb. 11, 2014 — Holland America Line announced the addition of Australian Chef Mark Best as the newest member of the line’s esteemed Culinary Council. Celebrated as one of the most innovative chefs in the world today, Best was welcomed to the group at an event on ms Amsterdam during the ship’s call in Sydney, Australia, while sailing on its 115-day Grand World Voyage.

Best will join Holland America Line’s Master Chef and Council Chairman Rudi Sodamin, and prominent international chefs Jonnie Boer, David Burke, Elizabeth Falkner and Jacques Torres on the Culinary Council. Best will add a selection of his French-inspired signature dishes to the line’s menus and work with Sodamin and other council members to shape the culinary direction aboard Holland America Line’s fleet.

“With our increased presence in Australia, it’s exciting to welcome to the Culinary Council an accomplished chef like Mark who has made headlines locally as well as internationally,” said Richard Meadows, executive vice president, marketing, sales and guest programs for Holland America Line. “Mark is known for his innovative Australian cuisine and we look forward to seeing his passionate influence on our menus and introducing his flair and originality to our guests.”

“The Culinary Council is a collaboration of some of the greatest international chefs, and Mark brings imaginative ideas from a part of the world that is very inventive with cuisine," said Rudi Sodamin, chairman of the Culinary Council and Holland America Line's culinary consultant. "Mark has great energy and creativity and our guests are really going to enjoy his dishes."

After an unconventional path toward a culinary career, Best found his passion for French food during an apprenticeship at the Macleay Street Bistro in Potts Point, New South Wales, Australia, in 1990. While there he was awarded the Josephine Pignolet Award for best young chef in New South Wales.

Best enjoyed stints working overseas in some of the world’s most famous French restaurants, including Alain Passard’s three-Michelin-star L’Arpége in Paris, France, and Raymond Blanc’s Le Manoir Aux Quatre Saisons in Oxford, England. He leaned on these experiences with classic French culinary preparation and matched them with his own innovation and intelligent recipe development to become the face of new Australian cuisine as he returned to Australia in 1999 and opened Marque in Sydney’s Surry Hills.

Heralded by restaurant critics from the New York Times, Los Angeles Times and around the world, Marque received the U.K. Restaurant Magazine’s World's 50 Best Restaurants “Breakthrough Award” in 2010 and ranks among the San Pellegrino World Top 100 Restaurants. Marque was named 2011 restaurant of the year by the Sydney Morning Herald’s “The Good Food Guide” and won the 2012 Australian Gourmet Traveller restaurant of the year award.

For a decade Marque has held a prestigious Three Hats — the highest of the iconic symbols awarded by “The Good Food Guide” — as well as the maximum of three stars from Australian Gourmet Traveller magazine in its annual top 100 list. Best has published a cookbook, “Marque: A Culinary Adventure,” and also has appeared on the television show “MasterChef Australia” as a guest chef and judge.

Holland America Line introduced the Culinary Council in 2010. In addition to providing expert guidance, advice and knowledge regarding onboard menus and culinary offerings, the Council works with the line’s offerings in the Culinary Arts Center, presented by Food & Wine magazine, to bring new and engaging learning experiences to guests.

* Star Places Order with Meyer Werft
Meyer Werft received another order today that brings the German yard’s order book to seven ships, which will keep the yard busy through 2017.
Star Cruises placed an order for a second 150,000-ton vessel that clones the first of the class ordered last October.

* Costa Sets Diadema’s Inaugural Programs
Costa’s new flagship, the 132,500-gross ton Costa Diadema will be delivered this fall on October 30, and Costa has set its inaugural programs and opened them for sale.

* Quantum Shaping Up
Royal Caribbean has sent us a new construction photo of Quantum of the Seas in the building dock at Meyer Werft. This one centers on the SeaPlex which is starting to take shape. 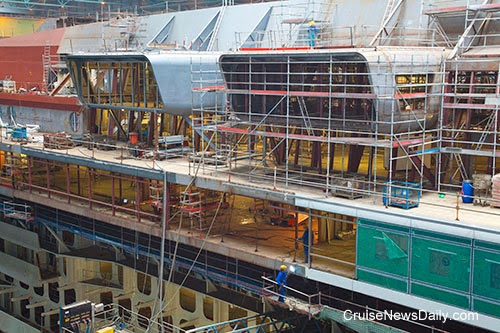 
Photo courtesy of Meyer Werft and Royal Caribbean. May not be copied or used without permission.