Princess Cruises' float in the 2015 Rose Parade with cast of The Love Boat won awards for showmanship and dramatic impact. The parade's them was "Inspiring Stories," and the float's theme was "50 Years of Inspiring Travel." 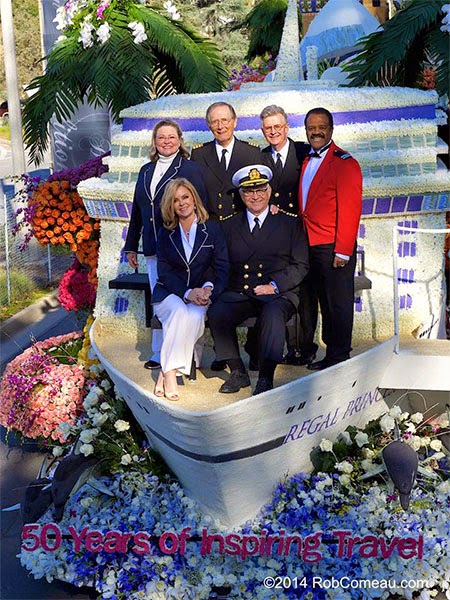 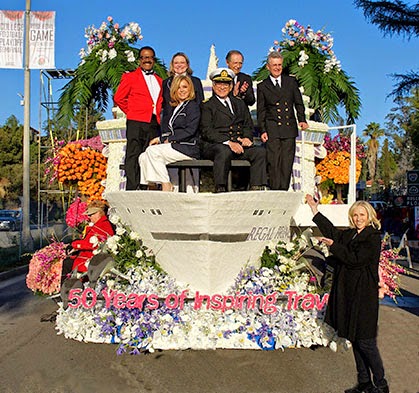 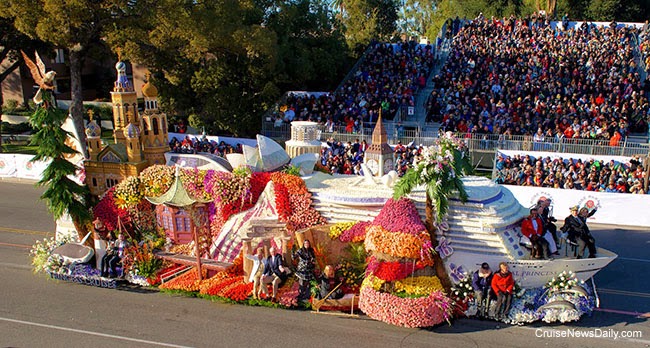 After just reuniting for the naming of Regal Princess last month, Princess Cruises has again brought the original cast of “The Love Boat” back together for launch of the celebration of the line’s 50th anniversary. On Thursday (New Year’s Day) they will be atop the line’s float in the 126th Rose Parade in Pasadena.

Today they made their way to the warehouse where the finishing touches are being put on the 60-foot float. During an interview with Al Roker for the Today Show, they just had to break into song, reprising Jack Jones’ iconic theme song for the show.

30 December 2014 – 50 years ago today, 30 December 1964, the contract for what was to become Queen Elizabeth 2 was signed. Of the 248 ships that have flown the Cunard flag since Britannia in 1840, QE2, as she was to become universally known, is one of the most significant ships Cunard has built.

At the end of August 1964 Cunard was in a position to invite tenders for Q4 – the widely-used codename for the new ship. The use of ‘Q4’ hinted that the new Cunarder was to be the fourth Queen ship that the company had built and meant that Queen Mary was now ‘Q1’ and Queen Elizabeth was ‘Q2’. ‘Q3’ never left the drawing board and it was the plans for that ship which were re-worked into ‘Q4’.

Technically ‘Q4’ should have been ‘Q5’ as the first Cunard Queen was Berengaria when Imperator was renamed.

The last two firms had formed a consortium to tender for Q3 but that was for a larger vessel so it was felt they would tender alone for Q4.

Many people still considered the Tyne shipyards the favorite for Q4 given their likely success in attracting Q3. John Brown’s order book was the least full of all the shipyards expected to tender and the disruption of Q4 on Clydebank would be virtually non-existent.

The tender document was issued to the yards on 9 September 1964 and consisted of 550 closely-typed foolscap pages of plans and specifications. Price was to be Cunard’s main consideration and the deadline for the shipyards was late November.

In mid-October Cammell Laird advised Cunard that “regretfully” they would not be tendering for the new Cunarder. The yard’s order book and delivery commitments were such that it could not commence work on the new ship until nearly a year later than the date necessary to meet Cunard’s delivery requirements.

A month later, the Fairfield yard announced it was also dropping out of the competition. Again the yard stipulated its order book and commitments as being the reason for not pursuing Q4.

The main John Brown board met at The Sanctuary, John Brown’s London office, to discuss and approve the terms of the quotation for Q4. In consideration of the great prestige of the contract, it was agreed to cover full costs and full charges but include no profit, although this was kept secret at the time. The board felt that ‘extras’, by way of changes to the contract during construction, would ensure no loss. It was their view that the contract for this ship simply must be won.

The tender from Harland and Wolf arrived at Cunard’s Liverpool Head Office on 28 November some 48 hours before the deadline. The next tender to arrive was from John Brown and the final one (delivered by hand by the two chairmen) came from the Tyne on 1 December.

On 30 November 1964 the tenders from the remaining three shipbuilders were opened:

The shipyards had been asked to quote a fixed price but all three stated that particularly due to the long building period they were unable to do so. At the time it was difficult to obtain fixed prices from the shipbuilders for any type of ship. Likewise there was no penalty clause for late delivery of the ship – this had been discussed during the preparation of the tender for Q3 when all the available builders indicated that they would not accept any penalty clause.

Even the price submitted by John Brown was £2 million more than Cunard had estimated the cost of a new vessel would be. On receipt of the tenders there were several urgent meetings with Cunard management adamant that Q4 was still too expensive and may have to be cancelled. The problem for management was that the aging Queen Mary and Queen Elizabeth would soon need to be taken out of commission which would leave Caronia and the four Canadian ships in commission with the result being a severe reduction in staff.

John Brown was advised that their tender was the lowest but that the price would have to be cut down further before a contract could be signed. Cunard asked the yard to reduce the cost of the ship by approximately £1.5 million. To qualify in time and obtain the benefits of the loan under the government’s Shipbuilding Credit Scheme it would be necessary for the ship to be paid for before 31 December 1964. That meant that within a period of two weeks the building agreement had to be prepared, agreed and signed. It was essential that the final figure be reached quickly.

A team of Cunard personnel went to Clydebank to meet with the yard management and over the course of three weeks, with beer and sandwiches at weekends, the cuts were made.

The group went through the specifications and managed to reduce the machinery (main and auxiliary) costs by £500,000 and the hull and electrical price by £1.5 million.

The whole tender was studied again and suppliers were asked to re-submit prices based on amended tenders. Even things such as the reduction in specification requirements for cabin furnishing (saving £62,000) to using white instead of colour sanitary units in passenger cabins (saving £9,000) were incorporated.

The most significant deletions and alterations, in a list prepared on 13 December 1964, to the original tender were as follows:

Perhaps the most significant deletion was one of the boilers which was deleted to also save weight and space. QE2 was originally to have had four boilers which could maintain full service speed with only three of these in use, allowing one to be shut down for maintenance without serious loss of headway. With hindsight the deletion of the fourth boiler proved to be a false economy as the lack of spare boiler capacity would compromise the liner’s reliable operation as a steam ship.

· The cruise launches were modified.
· The forward cranes to be Stothert & Pitt.
· The boat davits to be steel in lieu of aluminium. 69,000
· Omit the painting of aluminium behind the Linings. 12,000
· Enamel beds for crew instead of aluminium. 10,000
· The relocation of insulated cargo from aft to forward. 1,000
· The Boiler Seatings were reduced in number.

The team were also able to re-arrange the ship by pointing out anomalies in the passenger departments’ requirements regarding Pullman berths etc and this secured berths for an additional 200 passengers.

Some things, such as the stern anchor (reinstated in September 1967 at a cost of £25,000) and the Mortuary would be reinstated.

On 30 December 1964 John Brown’s Chairman Lord Aberconway and Sir John Brocklebank signed the contract for Q4 – the biggest passenger ship contract ever clinched in Britain. The contract was signed within the solid walls of the Bank of England. Sir John had telephone the unsuccessful yards earlier that morning to advise them of the company’s decision.

When the news was flashed to the Clyde, church bells rang out and there was much jubilation in the yard and on the Clyde as work for a large number of people on the world’s most prestigious shipbuilding contract had been secured for three years. Cunard, too, was delighted that the old partnership was in business once again.

Lord Aberconway: “Clydeside will have its happiest Hogmany for years. There will be no need to lay on a special celebration”.

Sir John Brocklebank: “This confirms our intention to stay in the forefront of the North Atlantic trade. This ship will be the match of any foreseeable competitor and of any cruising liner”.

Although Cunard stated they had not made any arrangements to name the liner pressure was mounting from America for a ‘Queen’ name while Princess Anne was the favorite in England.

In less than an hour Cunard were already receiving bookings for the new liner; 100 people, mainly Americans, registered on 30 December.

QE2’s actual build would be as traumatic as the race to secure the contract to build the ship. And throughout the build many thought Cunard was taking the biggest gamble in its history and that they were building a white elephant that would have to laid up or scrapped within six months of her entering service.

Well she defied those skeptics and, after entering service in May 1969, she went on to have one of the longest careers of any Cunard ships and her 39 years in service would see her sail more than any ship in history – over five million miles. For 34 years she maintained and continued the Atlantic service alone so perhaps her greatest legacy is her contribution to Cunard celebrating its 175th anniversary in 2015.

Photos courtesy of Cunard Line. All rights reserved. May not be copied or used without permission.Source: Cunard Line

A 25-year-old crew member aboard Quantum of the Seas was arrested by US Marshals Saturday morning when the ship returned to Cape Liberty Cruise Port (Bayonne, outside NYC).

He was arrested for allegedly entering the woman's stateroom on December 23 and engaging in unwanted sexual contact with her while she was sleeping.

He made his first appearance in federal court yesterday and was ordered held without bond.

It's All Coming Together in Pasadena

Things are coming together on Princess Cruises' float for Thursday's Rose Parade.

Here you see Julie Benson, Princess' VP of Public Relations, being interviewed by one of the local TV stations about why Princess in participating in this year's parade. (The theme of the parade is "Inspiring Stories" and that's right up Princess' block. It's also their 50th anniversary, so they are pulling out all the stops and the original cast of "The Love Boat" will even be riding aboard the float.) Look behind her and you'll see a section of the 60-foot-long float. Note the Bell Tower from Pisa at the left behind the camera and the dolphins at the right by the ship's bow. 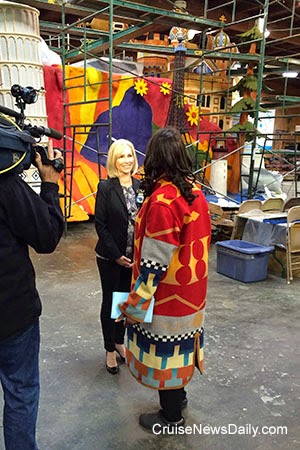 The next two photos are construction details that the builder takes for records. We always hear how the floats must have every inch covered in seeds or plants. Those of us who have never actually been to a Rose Parade never have the opportunity to see how this actually happens. The first photo is a closeup of the Bell Tower from Pisa. Below is some of the detail on the dolphin near the ship's bow. 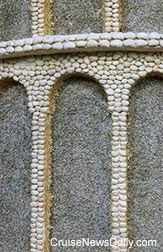 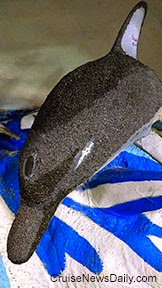