As we reported earlier this week, Carnival Triumph is currently making its way across the North Atlantic toward a shipyard in Cadiz for conversion into Carnival Sunrise. Carnival is treating its return more or less as a new ship.

Just as it's crossing the Atlantic, Carnival has announced the “new” Carnival Sunrise's senior officers.

The complete story appeared in the March 8 issue of Cruise News Daily.

Crystal has a new video series with celebrity chef Jon Ashton that's more about traveling than it is about dining. In the 12-part series, Ashton travels to different Crystal port cities where he meets up with a local dining expert and then samples the local cuisine at several local favorites. These aren't the high-end restaurants where Crystal customers would normally dine. These are the places only locals know about. But he samples the flavors that really define the city and then interprets those for a new dish on Crystal Serenity.

In the first episode, Ashton is in Los Angeles where he meets up with Chef Katsuji Tanabe of Top Chef fame, who takes him to his favorite local places for tacos. The first is open only one day a week, with the chef getting up in the middle of the night to cook and by mid-afternoon they are sold out - and the tacos are served on his back porch. The next place looks most like a fast-food restaurant and probably serves the artsy-ist tacos, and the last place is in a gas station, which Ashton just can't get over. In each, he loves what he has to the point of having multiple food-gasims. He's right; it all looks delicious and you can almost taste those tacos.

Emeril Lagasse to Take Creole to Sea aboard Mardi Gras

For almost thirty years, Emeril Lagasse and his restaurant have been a fixture in New Orleans' culinary scene. So who more appropriate to operate a restaurant in the French Quarter of Carnival's newest ship, Mardi Gras?

That's why Carnival Cruise Line announced today they are partnering with Lagasse to bring to his style and his cuisine to Mardi Gras. 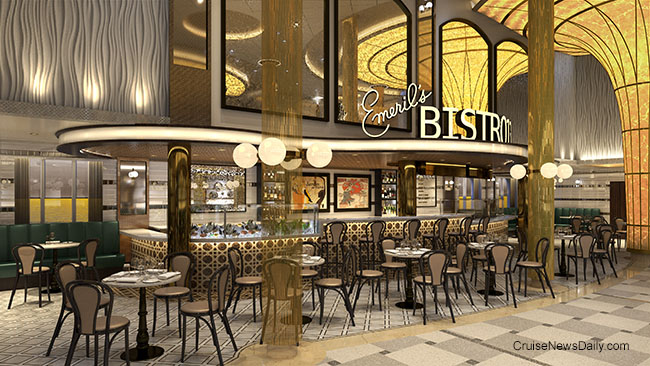 Rendering courtesy of Carnival Cruise Line. All rights reserved. May not be copied or used without express permission.
. 3/06/2019 11:59:00 PM

Do You Think She Likes to Cruise?

Her first cruise was in 1989 in the Caribbean aboard Fair Princess. Now, thirty years later, she's just celebrated 282nd totaling up to 2,500 days at sea, and Ilene Weiner has been named Princess Cruises' Most-Traveled Guest.

She achieved her “Most-Traveled” milestone on her 280th cruise, which was a 28-day Pacific crossing aboard Golden Princess from Los Angeles to, appropriately enough, Australia, because Australia is her favorite destination.

Details appeared in the March 6 issue of Cruise News Daily.

As we reported earlier, Windstar is about to g-r-o-w, but not by adding more ships, but by making three of the ones they have l-o-n-g-e-r to give customers more of what they like about Windstar.

The program is called “Star Plus,” and in it Star Breeze, Star Legend and Star Pride will all be cut in half and a new center section added with more suites and enlarged spaces for the public areas. This will happen over a 14-month period from October 2019 to November 2020.

The “amplified” Navigator of the Seas debuted last week with a practically whole new top deck, and one of the main features is the Perfect Storm waterslides, which are actually two different experiences.

Here's your chance to go down them without even getting wet.

Details were in the March 5 edition of Cruise News Daily.

A Quick Look at Bellissima

The video below gives you a quick look around inside the ship.


Details appeared in the March 4 issue of Cruise News Daily. 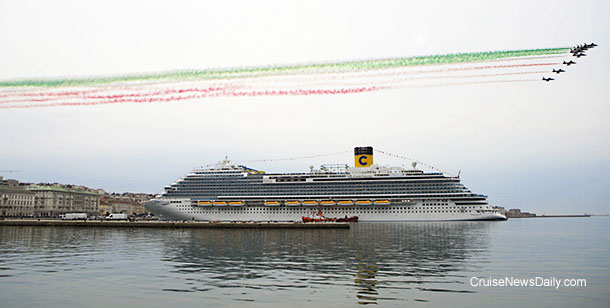