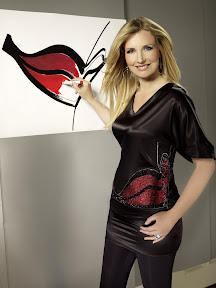 German designer and entrepreneur Jette Joop will be the godmother of AIDAblu. She will christen the ship in Hamburg on February 9, 2010, just before it departs on its maiden cruise.

AIDAblu is currently under construction at Meyer Werft and will be the fourth in the six-ship class. It will be the seventh vessel in the AIDA fleet.

AIDA is a brand of Carnival Corp that markets in German-speaking countries.

Like many stars before him, noted musician James Taylor and his family sailed aboard Cunard's Queen Mary 2 last week on an eastbound transatlantic crossing from New York to Southampton.

During the crossing he performed twice to SRO audiences in the ship's 1150-seat Royal Court Theatre. He also accommodated passengers by scheduling a Q&A session and posed for hundreds of pictures during an autograph session that was extended to two hours due to the demand.

"It is such a civilized way to go, and Queen Mary 2 is the last word in first class travel," said Taylor.

Now in England, Taylor begins a 10-week, 22 concert tour that will take him to nine countries.

In the video below, Taylor talks about the experience crossing the Atlantic aboard QM2.

Realizing that they were getting aced out of the cruise business as ships became bigger, Belfast spent £10m upgrading one of their deep-water berths to be 1,040 meters long, and the first ship to use it was Crown Princess this morning. It is estimated that the cruise industry brings about £15m annually to the local economy.

Remember Greg Surratt? He was the man aboard Royal Princess during the fire updating his Twitter account, which unwittingly was keeping hundreds, if not thousands, of people informed of what conditions were like aboard the ship, 140 characters (or less) at a time.

He's home now and has updated his blog, telling his story of his trip, the fire and his journey home.

As you can tell from his account, the emergency procedures were handled just as they should have been, and he has praise for the way Princess took care of the passengers and compensated them.

He mentions that several maritime personal injury attorneys began following his tweets. What he may not know is that they seemed to retweet his messages about the fire or things that weren't going well, but they didn't retweeted his postings that had anything positive to say about the way Princess handled it. So much for truth in tweeting.

He also seems surprised that Princess could update their website with information before the passengers had it on the ship. That speaks to miracle of modern communication and the ability it gives the home office (in California) to be very, very involved in every aspect of the ship's operation - in daily life and emergency situations.