The change in speed of Hurricane Lane has delayed the turnaround of Pride of America at Honolulu from Saturday to Sunday and Monday.

Another Reason for Choosing Princess for Your Cruise to New Zealand

Princess Cruises has expanded their program in New Zealand for the Austral 2018/2019 summer season that will take customers to places off the beaten track with the launch of two industry-first overland excursions in New Zealand's North Island and more than twenty exclusive shore tours. As part of the Local Connections Program, passengers will be able to experience the destination through the eyes of our local expert partner visiting their favorite local food, beverage and art establishments in every New Zealand port.

AIDA will take delivery of Carnival Corp's first LNG-powered ship AIDAnova, in mid-November. Operating an LNG-powered ship is a bit different not only in the way they perform but also in the fueling (bunkering) process and in the way safety measures are handled.

Rather than have AIDA crews being totally inexperienced in operating an LNG-powered ship on the day it is handed over to them, Carnival Maritime has partnered with Wessels Reederei, to do hands-on officer training aboard Wessels Reederei's LNG-powered container ship WES Amelie.

The complete story appeared in the August 23 edition of Cruise News Daily.

The US government has reduced the level of travel warning for US citizens going to Cuba.

The State Department reduced it from a Level 3 warning to a Level 2. The reduction takes the warning from advising citizens to “reconsider travel” to simply advising travelers to “exercise extreme caution.”

The 180,000-ton LNG-powered AIDAnova made its debut at Meyer Werft on Tuesday when the yard floated it out of the covered building hall to the equipment pier where it will remain until its river conveyance at the end of September. 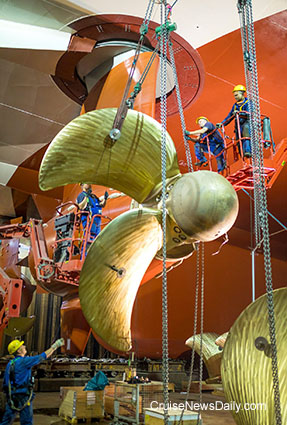 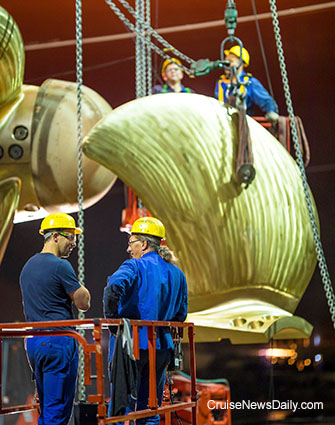 Photos and video are courtesy of Meyer Werft. All rights reserved. May not be copied or used without express permission.

While You Were Watching the Caribbean, Lane Is Bothering Hawaii

That has prompted Norwegian Cruise Line to make changes in Pride of America's itinerary.

Details appeared in the August 22 issue of Cruise News Daily.

Star Princess will move from Princess Cruises to P&O Australia at the end of 2021. That will replace the smaller Pacific Jewel, which has been with P&O since 2009.

The complete story appeared in the August 21 edition of Cruise News Daily.

Carnival Cruise Line had a double shot of good news for Port Canaveral today. They will be basing their 180,000-ton LNG-powered ship there when it is delivered 2020, and they are partnering with the port on a new state-of-the-art terminal to accommodate it. That will be necessary because it is Carnival's largest ship, with 5,286 lower berths.

Details appeared in the August 21 issue of Cruise News Daily.

The Beginning of a Trend?

P&O Cruises (UK) will eliminate the discretionary daily service charge which is automatically added passengers' onboard accounts. The change becomes effective in May 2019, and will apply across the fleet.

Details appeared in the August 21 edition of Cruise News Daily.

Overboard and Lived to Tell about It

A 46-year-old British woman went overboard from Norwegian Star in the early morning hours (apparently just after midnight) of Sunday morning (August 19) as the ship was sailing from Dubrovnik to Venice.

The ship was approximately 60 miles off the Croatian coast at the time, but the water was about 70 degrees. The woman managed to tread water for about ten hours until she was spotted by a Croatian Coast Guard vessel and taken aboard about 9:40am, a little more than a half mile (1.3 km) from where the ship calculated (from video) she must have gone overboard.

The complete story appeared in the August 20 edition of Cruise News Daily.

And the next Princess ship will be named ....

Princess Cruises revealed this morning that their next ship will be named Enchanted Princess. The 143,700-ton ship will be an evolution of the Royal-class ships and will be built at Fincantieri's Monfalcone yard for delivery in the early summer of 2020.

“The name Enchanted Princess is captivating and conveys the elegance and grace of our new ship which will introduce more travelers to the pleasures and value of cruising,” said Princess president Jan Swartz. “We are certain Enchanted Princess will exceed the expectations of our guests, ensuring they have the most memorable cruise vacation.”

This story appeared in the Ausugt 20 issue of Cruise News Daily.