The new ships just keep coming, but this one has a rather special mission.

There was that special moment at Fincantieri's Monfalcone yard today where a ship's hull first touches water when the yard flooded the dry dock where Costa Venezia had been built, and the ship floated up.

The complete story appeared in the June 22 edition of Cruise News Daily. 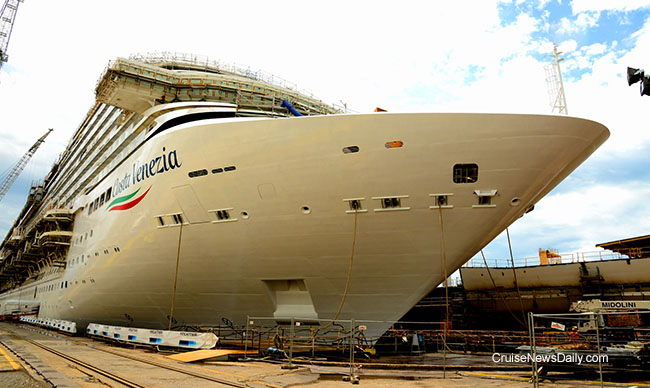 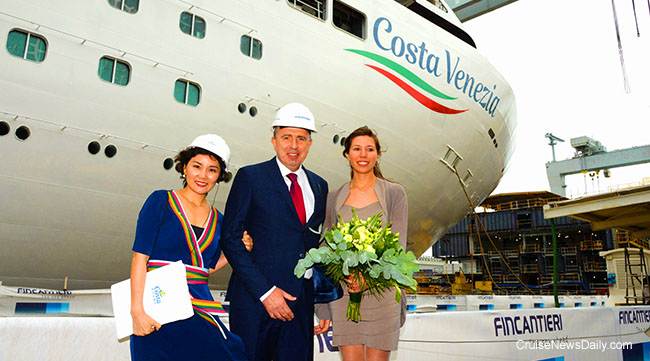 Meyer Turku became the proud owner of a gigantic crane, the largest in the Nordic countries, when it was delivered to the shipyard by the Finnish builder KoneCranes.

As cruise ships of the future increase in size, they will necessitate the larger (and higher) lifting capacity that the crane will provide.

Details appeared in the June 22 edition of Cruise News Daily.

Mariner Ready to Change the Game

Back in February we told you that short cruising from Florida was going to change when Mariner of the Seas entered the short cruise (3 & 4-night) market from Miami this summer. A ship of this class would have made a huge impact by itself, but with a $120 million investment in added new features, it's going to have Royal Caribbean's competitors playing catch-up.

The complete story appeared in the June 21 edition of Cruise News Daily.

Details appeared in the June 21 edition of Cruise News Daily.

They Were Not Alone

Most of the passengers aboard Queen Mary 2's world cruise earlier this year on the segment through the Gulf of Aden didn't realize it at the time, but also aboard was an armed squad of former Royal Marines, set to defend the ship in case of a pirate attack.

Passengers were made aware of the unlikely possibility of an attack when Captain Peter Philpott sent a letter to each stateroom giving passengers basic instructions should there be an attack, and asking them to keep their balcony lights off at night. Passengers were also made aware the ship was under the protection of an international task force that protects merchant ships from pirate attacks. There was a uniformed Royal Marine Colonel aboard who gave passengers a security briefing.

Girl Power Down Under

When sailing on any of the Carnival Australia brands and you see a woman in a white uniform, don't assume she's a nurse. She's probably one of the ship's officers. The company says they are doing their part to achieve gender balance in seafaring careers.

Details appeared in the June 20 edition of Cruise News Daily.

Disney seems to be the first out of the box this year talking about Halloween aboard their ships. Of course on Disney, Halloween isn't so much a really scary affair; it's more of a fun time with stuff that's supposed to be scary but really isn't.

Take a look at this b-roll for an extended look at the detail that's incorporated into DCL's Halloween features. It is b-roll so there is just some background sound, and clips from this are meant to be used in other video productions or with voiceovers.

The complete story appeared in the June 19 edition of Cruise News Daily.

Start the New Year with Some Insight

Details appeared in the June 19 edition of Cruise News Daily.

This morning I received a press release that said Carnival Corp had signed an agreement with the international NGO Bellona Foundation to continue improving the cruise industry's sustainable practices.

“So what? Who cares?” I thought. This will do about as much good as one of those things like when they give a half million dollars to some international organization to end world hunger.

But then just as my cursor approached the arrow that would put the press release back in the electronic stack of press releases I'll never look at again, my eye fell on the line in the press release that said, “Setting an aspirational goal of zero emissions in port and during operations in pristine areas will help to force breakthrough approaches in technology and operations to reach that goal.”

The complete story appeared in the June 18 edition of Cruise News Daily.

It must have seemed like a good idea at the time. If you have Sushi Master Andy Matsuda aboard your ship, wouldn't it be fun to have him make the largest sushi roll at sea?

Details appeared in the June 18 edition of Cruise News Daily.