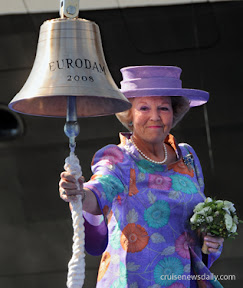 Last Tuesday (July 1, 2008), Queen Beatrix of the Netherlands named Holland America's new Eurodam in Rotterdam harbor. We have uploaded some photos to a Picasa Album.

From the Welcoming Department

Eurodam made its maiden call at Hamburg today. In celebration tonight, despite the rain which set in about 6pm, the port hosted a fireworks display over the river.

From the Deja Vu Department:

If you weren’t able to attend the Eurodam christening live on Tuesday, Holland America has a replay available on their website at http://www.hollandamerica.com/ (The link makes you think that July 1 is still upcoming, but play along and, as of this writing, it does still show you a lengthy replay.)
. 7/02/2008 10:30:00 PM

From the How to Throw a Party Department:

Eurodam was christened today in Rotterdam by Queen Beatrix of the Netherlands. She did her thing and then went to tour the ship and meet some Dutch crew members. Amazingly, there were enough that they circled the entire swimming pool, and she went around and shook every last one’s hand and spoke with each.

As I wrote in CND, even at the ceremony it seemed like she wanted to linger a bit longer because she was enjoying the music. It seems a shame that someone in that position, who technically could do anything she wants, in reality can’t. She can’t just say, “Let’s stay for dinner. I hear they are going to have an outstanding fireworks display to mark the occasion tonight.” She has other commitments and there are security concerns and so forth.

It’s too bad she couldn’t have stayed. Holland America celebrated the christening of their largest vessel - and the largest ship flying the Dutch flag - with a formal dinner. After dinner at 11:15 tonight, Eurodam’s whistle signaled the start of an incredible fireworks display, one it will take Rotterdam a long time to forget.

The fireworks were set off from a barge alongside the ship in the river. At any given time during the display there were at least six shells in the air, and many times, two or three dozen. Near the end of the 20-minute display, a sign constructed of tiny flares that said “HAL 135" (years) was lit on the barge, and that set off a massive launch of maybe 150 shells before a minute-long blast from Eurodam’s baritone whistle signaled to all of Rotterdam’s riverfront that Holland America’s new flagship was ready for service. 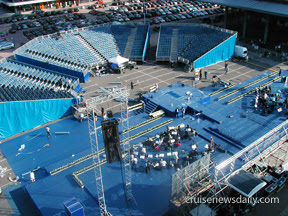 From the Arrival in Rotterdam department:

Eurodam just arrived in Rotterdam where it will be named on Tuesday by Queen Beatrix. Just like for Oosterdam when it was named here a couple of years ago, the Dutch came out by the hundreds to watch it sail down the river and to dock here by Holland America’s original headquarters building.

For many, it is a connection back to their family history, because for many generations, people had family members working at sea for the Holland America Line. But the strange thing is how they deal with this. For the most part, they are completely silent. There is no waving. There’s certainly no cheering. They just stand there in silence looking. Occasionally there is a flash from a camera. Some people do shift positions or walk about, but mostly they just stand there. It’s almost like their relatives, long passed, have returned, and by their presence here they are here paying their respects.