Private islands and self-contain resorts have become a staple of the American cruise industry. Genting Cruise Lines announced today they will develop a private island in Asia (their home base) for their brands in Myanmar. The Lonely Planet travel guide selected Myanmar (the former Burma) as one of the top ten countries to visit in 2017.

Plans call for the development of a facility on MacLeod Island for the use of passengers of Genting's three brands: Crystal Cruises, Dream Cruises and Star Cruises. The Genting operation will be a self-contained resort (rather than a truly private island) much as is Royal Caribbean's Labadee or Carnival's Grand Turk Cruise Center.

The complete story appeared in the November 3 edition of Cruise News Daily. 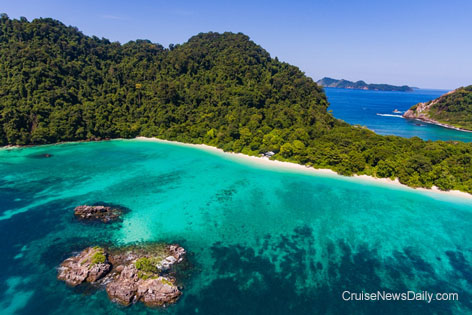 Photos courtesy of Genting Cruise Lines. All rights reserved. May not be copied or used without express permission.

T Minus 50 and Counting

Only 50 days left! No, not shopping days until Christmas. Fifty days until Miami enters the Seaside Era. And that means lots of excitement for Miami and the American market.

That's when the 154,000-ton MSC Seaside will have arrived, fresh from the yard, and will commence year round seven-night Caribbean cruises from Miami.

Details appeared in the November 2 edition of Cruise News Daily.

The Costa brand may have been the first western cruise line to enter the Chinese market back in 2006, but they're playing catch up in building ships specifically for that market as a handful of brands has already beaten them to it and have ships operating there with features custom-designed for Chinese passengers.

But Costa is ready to catch up and surpass as Fincantieri laid the keel today for the first of two Costa designed for China.

Costa held a coin ceremony today in which a commemorative coin was welded to the keel for good luck before Fincantieri laid the keel at their Monfalcone yard near Trieste.

Details appeared in the November 1 edition of Cruise News Daily.

Virgin Voyages made a splash today when Fincantieri laid the keel for the first of their three 110,000-ton ships at their Sestri Ponente yard near Genoa.

The line used the opportunity to reveal some interesting details about the ships and to reveal the first exterior renderings.


Photo courtesy of Fincantieri. Renderings courtesy of Virgin Voyages. All rights reserved. May not be copied or used without express permission.
. 10/31/2017 11:59:00 PM

Federal agents boarded Disney Wonder in San Diego Friday to arrest a Brazilian crew member who worked in the gift shop alleging he embezzled at least $275,000 from the line.

The government says the 32-year-old man has been transferring Disney funds to gift cards since October 2015, and that he used $35,000 worth of the gift cards to take his family on a two-week trip to Disney World last April.

The complete story appeared in the October 31 edition of Cruise News Daily.

Windstar Cruises has promoted Jess Peterson on the heels of his first anniversary in joining the luxury line after a series of outstanding efforts quickly resulted in significant profitability for Windstar. In accepting the larger role, Peterson will take on additional responsibilities for detailed revenue analytics while continuing to have oversight for all aspects of itinerary planning for the award-winning cruise line.

"Jess is an incredibly bright individual who brings a disciplined analytical approach to everything he does, helping us make informed yet bold choices in our itinerary planning processes," said Windstar President John Delaney. “We couldn’t have taken on everything we have over the last year without Jess’ efforts.”

With Peterson’s leadership working across multiple departments at Windstar including Port and Nautical Operations, Marketing, and Public Relations, Windstar opened three new regions including Asia, Alaska, and Canada/New England. In 2018, Windstar will embark on 49 new cruise itineraries and an astonishing 148 maiden ports of call, in part due to Peterson’s efforts. In this new role, Peterson will continue directing the itinerary planning efforts while also taking a growing role in advanced revenue analytics, forecasting, budgeting, and strategic pricing.

Jess Peterson joined Windstar in the fall of 2016 as the manager of deployment and revenue planning enhancement, a position that had been newly created at the time. He supported the company’s cross-departmental deployment and itinerary planning efforts to enhance profitability, guest satisfaction, and brand positioning within the marketplace. He also drove efforts to increase overall revenue performance.

Prior to working with Windstar, Peterson held positions at Holland America and Seabourn, where he was part of the Deployment and Itinerary Planning team. Peterson is based in Seattle and graduated from Stanford University with a B.A. in History and an M.S. in Computer Science.

Out with the Old, up with the New

It happens about every five years. Windstar ships get new sails.

Containing enough material to cover nearly half a football field, it's no trifling matter.

Recently, it was Wind Surf's turn, the line's largest ship at 14,745 grt with five towering masts.

As vice president of environmental operations, Pruitt will be focused on further strengthening and expanding the company’s shipboard and shoreside environmental programs and practices.

“Rich is extremely well respected in the industry and we’re thrilled to gain his exceptional knowledge, expertise and leadership,” said Jackson. “We look forward to tapping into his experience to ensure we maintain the highest level of operational standards.”

Pruitt began his career in the U.S. Air Force where he spent 10 years as an Airborne Russian Linguist and Mission Supervisor. He then served for 13 years in the U.S Coast Guard in various roles, including program manager, passenger vessel safety and security.

Pruitt holds an Environmental MBA from Florida Atlantic University, a BA degree in Management from National Louis University and an AA degree in Russian Interpreting from the Community College of the Air Force.