Earlier this week in Las Vegas, Norwegian Cruise Line president and CEO, Colin Veitch, revealed elements of the nightlife aboard their next generation of ships. Here he briefly describes, Las Vegas style, each of the four clubs and the Ice Bar.

The complete story appeared in the June 20, edition of Cruise News Daily.

There will be five distinctive nightlife venues, but they aren’t just for the night, rather they will start entertaining passengers in the morning (some at sunrise) and morph from one distinct atmosphere to another throughout the day and the night.

Some will be open to everyone, some just to suite passengers, and some will have a charge. Some will feature quite unique entertainment, even to the point of saying it hasn’t been attempted on a cruise ship before. And the venues have been designed specifically to support these concepts.

To get you thinking along the right track, remember this reveal about "nightlife" was held in Las Vegas for a reason. Think the unusual production shows with visual effects; think the club scene.
The nightlife may not be for everyone, but it is going to be like nothing currently on any other cruise ship. If the "nightlife" isn’t quite for you, there will be plenty of other entertainment, which will be revealed later. Like the new type of staterooms we’ve already seen, NCL, no doubt, has a twist ready to apply to the standard of cruise ship entertainment too.

You will be able to get a taste of the nightlife later today at the special F3 website at http://f3.ncl.com/

From the on the way home department:

Last Saturday, on its way back to Miami, Carnival Valor spotted a raft with migrants aboard and carefully pulled close to investigate.

They found six men and a woman on the raft, and in line with regular procedures, they advised the US Coast Guard, which said they would send a ship to pick up the people. Carnival Valor remained with the raft until the Coast Guard arrived to make sure the people would be safe. While they were waiting, they supplied the people with fresh water since they had been without for five days.

But not all the communication was with the Carnival crew. The passengers usually want to know why the ship has stopped and quickly understand the situation. Even though it's a routine (and regular) occurrence for cruise ships, for the passengers, it's quite unusual.

In this case, according to local Miami media, the passengers were shouting back and forth to the migrants and even taking pictures. At one point, one of the men on the raft shouted a Miami phone number to some women on a balcony and asked them to call his relatives and let them know that he was alive.

The Coast Guard eventually did come and take the people aboard their ship, and Carnival Valor continued on its way back to Miami. Under US policies, since the people did not actually land on shore, it's doubtful they will be allowed to remain in the US.
. 6/17/2008 06:09:00 PM

The Beginning Is Near 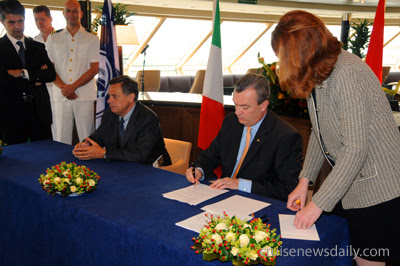 These happy people are transferring ownership of Eurodam from Fincantieri to Carnival Corp.

Stein Kruse (at right), the president of the Holland America brand, is signing the document accepting delivery. The formalities took place today aboard the ship at Fincantieri's Marghera yard.