Catching one of the first waves was Carnival Cruise Lines' president, Gerry Cahill.

The attraction is located adjacent to Margaritaville just at the end of the center's pier. It is available as a shore excursion on all ships stopping at Grand Turk.

EasyCruise Life grounded briefly today while entering the harbor at the Greek port of Syros. There were no injuries. The ship was towed to port, and the cruise will continue as scheduled.

From the can you hear me now department:

Wireless Maritime Services reports that Royal Caribbean has renewed their contract for five years to provide cellular telephone service to passengers and crew members on the company's Royal Caribbean and Celebrity brands. The WMS agreement covers the existing ships in those brands as well as any new ships added during the life of the contract.
. 6/12/2008 07:33:00 PM 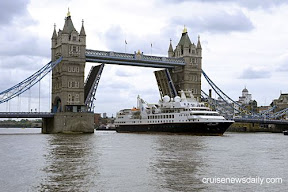 Silversea's Prince Albert II arrived in London this morning sailing under the Tower Bridge. The ship embarks its first passengers on June 12. 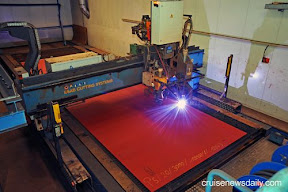 The first steel was cut today at Meyer Werft in Papenburg for Celebrity Eclipse.

Celebrity Eclipse will be the third in the 122,000-ton Solstice class and is scheduled for delivery in June 2010. The first, Celebrity Solstice, will be floated out in August, and delivered in October.

From the good idea, considering dept:

Oceania has decided to drop the 3-day call at Yangon, Myanmar, on Insignia's 16-night cruise from Dubai to Singapore. Much of Myanmar has been devastated by Cyclone Nargis last month.

The itinerary has been adjusted by adding a day here and there so the ship will still depart Dubai on December 4 and arrive Singapore on December 20. On the bright side, the revision now makes a 3-day excursion to the Taj Mahal possible. The down side is the excursion costs $1899.

From the Dominos Eat Your Heart Out Department 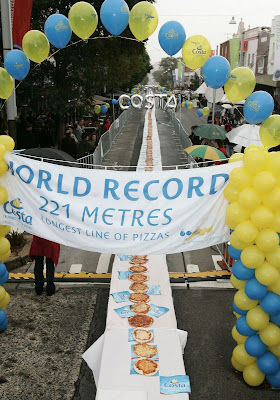 Another world record for Costa Cruises. This one has nothing to do with maritime matters, however. This one got a little attention for a company in a market where they aren't quite as well known as in many other parts of the world, but more important, the object of the world record went to feed Sydney's homeless.

It took 826 freshly-cooked pizzas, laid out on tables stretching more than 725 feet down the length of Norton Street in Leichhardt, known as Sydney’s "Little Italy," to break the record for the world's longest line of pizzas. It took 25 chefs, more than 1100 pounds of flour, 66 gallons of tomato sauce and 661 pounds of mozzarella cheese to accomplish the task.

And just how did they arrive at the number of pizzas to line up? Costa Classica which is now based in Asia, a prime cruise market for Australians, is 725 feet long, or 826 pizzas in length, apparently an Italian unit of measurement.

As soon as the world record was verified, the pizzas were collected by OzHarvest, for delivery to local charities to feed the homeless and disadvantaged. Costa also made a cash donation of A$10 for every meter (221) of pizza to another local charity fund.
. 6/08/2008 10:00:00 AM