* Doing the Executive Shuffle at the Top - the UK Way
Carnival Corp shuffled executives at the top of the UK Corporate structure, moving up two key people and adding another to fill the empty office.
Carnival Corp announced this morning that David Dingle will move up from CEO of Carnival UK to become the chairman of Carnival UK. At the same time David Noyes is being promoted from executive vice president of operations to fill the CEO position. He will have operating responsibility for the UK-based P&O and Cunard brands.

* Fincantieri Starts Work on Another
Fincantieri cut the first steel today at their Marghera yard for Viking Sea which is the second ship they are building for Viking Ocean Cruises.

Photo courtesy of Royal Caribbean International. All rights reserved. May not be copied or used without permission.
. 9/12/2014 11:02:00 PM

* Everything Has a Price
Most cruise passengers have never been to the naming of a new ship. Many may have seen the ceremony and the breaking of the bottle on the internet, but it is even more exciting in person.
Some passengers aboard TUI’s Mein Schiff 4's maiden cruise will have the opportunity to attend the ship’s naming - for a price.

* Taking a Page from Bermuda’s Playbook
Bermuda has taught Nassau a valuable lesson. There’s easy money to be made from tourists who come on cruise ships. A number of them will have drugs, and if you arrest them, you can fine them hundreds of dollars which they will readily pay rather than face a jail term.
These types of arrests seem to be on the rise in Nassau with four American tourists from cruise ships arrested over the weekend and in court on Monday. Altogether, fines of $1,500 were collected. Two of the men arrested together had just a gram of marijuana between them.

* Under the Knife
Today was the big day in Palermo when MSC Armonia was actually stretched. Photos

* Other Things You’ll Want to Know
CND subscribers also read about what was going on at another shipyard ... and the relationship with Southampton.

MSC Armonia Goes under the Knife

MSC Armonia is now more than 24 meters longer than when it arrived at the Fincantieri shipyard in Palermo (Italy) at the end of last month. As part of MSC Cruises' Renaissance Project, the ship is being lengthened by way of inserting a 24-meter section in the middle. The cutting completed on Monday, it was pulled apart today on the rails in the dry dock, and the new midsection will be in place tomorrow.

These photos show the incision and the new section ready to be inserted. The time lapse video below shows today's whole process. For perspective on the size, note the people walking on the bottom of the dry dock. 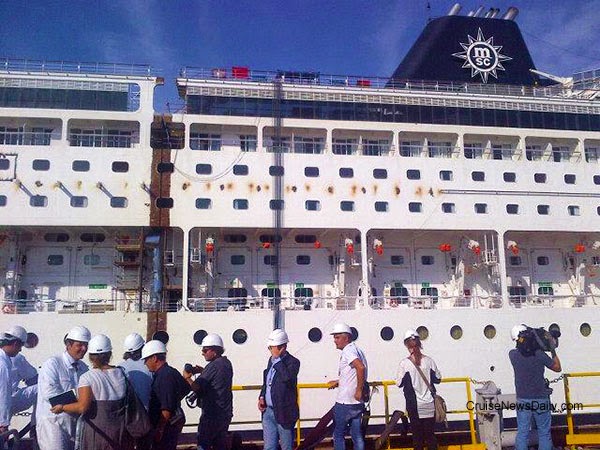 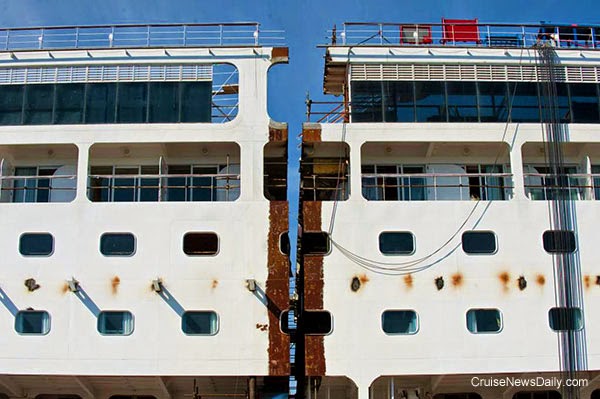 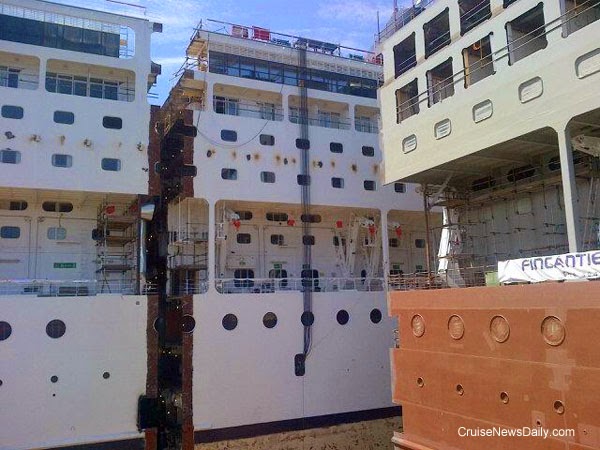 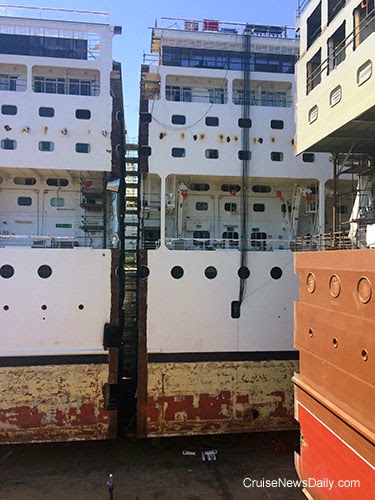 Photos courtesy of MSC Crociere. Video courtesy of Matt Sparke. All rights reserved. May not be copied or used without permission.

This article, written by Michael Gallagher, public relations executive and historian for Cunard Line,
is part of an ongoing series of key moments in Cunard Line's history.


Southampton has been a port since at least Roman times. During the Middle Ages, it was particularly important for wool and wine trade, which finally dwindled away almost completely by the early 18th Century. After a brief period as a spa resort, the port sprang into new life with the coming of the railway; and by 1840 – the year Cunard service from Liverpool to Boston began – it was obvious Southampton’s future prosperity as a passenger shipping port was assured.

During the 19th Century, the docks at Southampton gradually expanded, and many shipping companies came to use the port regularly. Liverpool remained the Cunard port, although an occasional call at Southampton by a Cunarder was not unknown.

White Star Line had been using Southampton since 1907 and had an office there. Cunard made occasional calls before World War One; but after that Cunard found it politic to operate its express liner service from Southampton and, in 1919, an office was established at Maritime Chambers. Soon Cunard's “Big Three,” Mauretania, Aquitania and Berengaria, were running from Southampton to New York via Cherbourg, with the first Cunarder to use the port being Aquitania. However, Mauretania inaugurated the new service on 18 November 1919.


The increased prosperity made the Southern Railway Company, who then owned the docks, consider plans for greatly enlarging them, and by the late 1920s the New Docks was under construction. News of the proposed new superliner, Queen Mary, prompted Southern Railway to include a giant dry dock in its plans – one large enough to accommodate Queen Mary. The New Docks was largely finished during the early 1930s, and on 26 July 1933, the dry dock was officially opened by King George V, whose name it bears.

The decision in 1965 to make Southampton the Head Office of Cunard meant that the premises at Maritime Chambers, used since 1919, were no longer adequate, so South Western House became the new home of Cunard. The former hotel building had been converted to provide office accommodation for the company. About 120 staff members and their families moved from Liverpool to Southampton, the existing staff of some 200 persons was retained and about 200 extra personnel were engaged, many locally.

When QE2 entered service in 1969, she was the first Cunard passenger ship to have Southampton on her stern.

Cunard remained at South Western House until 1996 before relocating to Mountbatten House at Grosvenor Square ,and then to Harbour Parade in 2009.

Video: The Push Is on to Complete Quantum of the Seas

It's only six weeks until Meyer Werft delivers Quantum of the Seas to Royal Caribbean, and as you can see on the video below, the push is on to complete the details and get the ship away from the outfitting pier and out on sea trials. The yard is planning for that by the end of the month.

* Running on the Spare
When Celebrity’s Millennium-class ships were built, they were powered by state-of-the-art gas turbines. A few years ago, as the price of gas rose dramatically, they became expensive to operate, and as regular readers will remember, through an engineering miracle, they were able to install a diesel engine (which was much more economical to operate) and leave the gas turbines in place. Celebrity is glad they did.
Constellation’s diesel engine has broken, and it needs a large component replaced. In the mean time, it is operating with its “spare” gas turbine, meaning itineraries are not being affected.

* Ladies, Start Your Engines
The day that a cruise ship starts its engines for the first time in the yard is a big deal because they generate the electricity for the ship so from that time on, they are seldom ever all completely shut down.
Today was that day for the 141,000-ton Britannia, the largest ship ever built for the British market. Photos

* Other Things You’ll Want to Know
CND subscribers also read about a Princess bus overturning ... earning more than $3,300 per minute ... and Australia exploding.

P&O's Britannia started its four engines for the first time today at the Fincantieri yard at Monfalcone (Italy). Chosen to start the giant engines was Formula One race commentator Suzi Perry.

At 141,000 tons, Britannia is the largest cruise ship ever built for the British market. Britannia will enter service for P&O from Southampton on March 14, 2015.

Geneva, 8 September. On Thursday 4 September, MSC Cruises was awarded the Swisscom Business Award, an award dedicated to the most pioneering ICT project in Switzerland and presented by Swisscom. MSC Cruises was rewarded for its innovative approach in the project around its managed contact centre solution (MCCS).

“MSC is an impressive testimony to how technology and innovation can be used to intensify customer relationships,” said chairman of the judging panel Thomas Wirth.

Some 80 companies submitted entries for this year's Swisscom Business Award. The awards are in recognition of Swiss companies and institutions that have implemented groundbreaking ICT solutions. Manor AG, Universitätsspital Basel (Basel University Hospital), Schwyzer Kantonalbank, MSC Cruises, Loeb AG and Fondazione Ticino Cuore (Ticino Heart Foundation) all made it to the final. A judging panel made of specialists evaluated the solutions submitted by the finalists according to the criteria of business benefit, degree of innovation, technology and sustainability.

MSC Cruises wins with new sales channel
The above-mentioned jury had thoroughly studied the finalists’ contributions before deciding that MSC Cruises emerged as the winner. To improve and intensify its direct contact with clients, the company merged its contact centres in eleven global locations into a single cloud-managed solution. As the explanation for the panel's decision to grant the Swisscom Business Award to MSC Cruises, Thomas Wirth commented, “MSC has created an entirely new sales arm for new regional markets that complements its existing channels. We were impressed by the added value generated by MSC's cross-border managed contact centre solution.” 300 agents across Europe are already advising customers via the new platform. It enables the company to cater to the needs of future and potential guests over a longer time span, starting from the research stage through the booking process to the time prior to, during and after a cruise.

Targeted consulting thanks to direct customer contact
With the centralised telephone communications platform, MSC lays the foundation for implementing its corporate strategy. The focus here, alongside real-time control of the eleven European contact centres, is on strengthening direct customer contact and, above all, on enhancing a continuous and innovative customer experience.

At the end of the night, Luca Pronzati, MSC Cruises Chief Strategic Development & Sales Services Officer, declared “the Swisscom Business Award represents an achievement for all those who have worked very hard in order to make the customer journey as flawless as possible and ensure that our guests and travellers can focus on their holidays as early as possible. This project could only be implemented in such a complex and challenging international setting thanks to the long and fruitful partnership between MSC and Swisscom.”

“Christine has been with the company for many years and she’s continued to grow and evolve as her role has developed,” said Dunwoody. “She brings great knowledge and expertise to her expanded territory, and we congratulate her on this well-deserved promotion.”

Thurlow joined Holland America Line in 1995 and has held various sales management positions during her tenure. Most recently she was manager of national accounts for Canada, a position she held since 2001. From 1995 to 2001, she served as Holland America Line’s business development manager for British Columbia.

During Thurlow’s time as the manager of national accounts for Canada, her achievements included receiving the Outstanding Achievement Award for Sales 2011 and being named Cruise Supplier of the Year for Travelsavers Canada 2011, CAA Cruise Supplier of the Year from 2006 through 2010 and Cruise Partner of Year from the Ensemble Travel Group from 2006 through 2013.

Thurlow holds a Bachelor of Arts in geography with a major in tourism from the University of Calgary. She lives in Vancouver, British Columbia, Canada.