And Now a Brief Musical Interlude

When the crew of Caribbean Princess suddenly found themselves with an unplanned night in New York last month, see what some of them did in this short video.
. 9/04/2009 03:43:00 AM

It's been widely reported that a passenger went overboard from Carnival Sensation late Wednesday evening (September 2, 2009). A search was immediately begun by Carnival Sensation and other ships in the area. The man was heard yelling for help and was recovered very quickly (within 90 minutes) by the crew of Disney Wonder, even before any Coast Guard assets could get on the scene.

WPBF tv in West Palm Beach has exclusive video of the rescue and the man being brought aboard the Disney ship, shot by a passenger. The entire video runs more than 15 minutes. If you want to skip ahead to the real action, it starts about 7 minutes into the run, but even the earlier scenes are interesting as you can hear the announcements to passengers on the open decks to remain quiet so they can hear the man in the water and the cheer that goes up when the man is rescued. 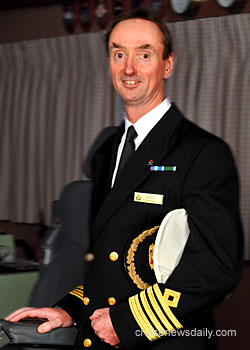 Cunard Line has chosen Captain Chris Wells to be the first master of Queen Elizabeth, which will be delivered in the fall of 2010.

Wells previously served aboard QE2 where he rose to the position of staff captain. From there he was chosen to be the first staff captain of Queen Mary 2 and worked on that ship's newbuild team, bringing it out of the yard. Last year, he was appointed to be master of QM2, the position which he currently holds.

Captain Wells will shortly be reassigned to Monfalcone (Italy) where he will be involved in the building of the new ship at the Fincantieri yard.
. 9/02/2009 09:59:00 PM

The eye of Hurricane Jimena has passed to the west of the popular port city of Cabo San Lucas, but the city still experienced strong winds, rain and heavy surf.

The tourist board at Los Cabos says that Cabo San Lucas escaped major damage, and the area is again open for business. (The airport has already reopened.) There was no known damage to the hotels and tourist attractions. Storm debris (palm branches and such) does litter the streets, but it should be cleaned up very quickly.

At this point, cruise lines haven't officially announced their returns, but it's expected that they will return with their next regularly scheduled calls.
. 9/02/2009 03:52:00 PM

Someone up There Gets It

There's evidence that at least some people in Alaska have figured out that their tourism industry is in trouble now and is headed for more trouble. The Anchorage Daily News ran an article at the end of last week by Tom Bradner, an economist in Alaska, and he has figured out why there's trouble in the 49th State. He came to many of the same conclusions we did in a recent Cruise News Daily article. The recent tourism summit proves that at least some of the leaders are getting it, but they still aren't fully understanding what's causing the problem, so their solutions have little chance of working.

But just when you think there may be a light bulb going on in Alaska, you read the comments from ADN readers at the bottom of Bradner's article, and you see the average citizen in Alaska just doesn't get it.
. 9/01/2009 11:18:00 AM

To accommodate the larger number of passengers on Disney Dream and Disney Fantasy, Disney is expanding the facilities on their private island in the Bahamas, Castaway Cay. Along with the larger facilities will come some new ones as shown in the video below.