Celebrity will update two of their Millennium-class ships with a big new feature, upgrade the top suites, and change a specialty dining option among other updates to Celebrity Infinity and Celebrity Summit - all before next spring.

A short video introducing the projects is below.

The complete story appeared in the October 9 edition of Cruise News Daily.

The Name for the Ship You'll Probably Never See

Princess Cruises has chosen the name Majestic Princess for its next ship, which will enter service during the summer of 2017. The 143,000-ton ship will be a sister to Royal Princess and Regal Princess.

Choosing a name for this ship was trickier than normal for the California-based line.

Details appeared in the October 9 edition of Cruise News Daily.

Have you ever noticed how practically all cruises in the western Caribbean stop at Cozumel? That’s because they do. As of today, Carnival Corp is ready for them, because they just increased their capacity at their pier at Cozumel by 50%.

The company has just added a third “arm” to its Puerta Maya pier at Cozumel. It was officially opened today when Carnival Breeze, Carnival Freedom and Carnival Triumph all called at the facility.

The complete story appeared in the October 8 edition of Cruise News Daily.

Another Old Friend Moving On

When cruise lines were building one new ship after another, people expected the Caribbean to eventually become so full of ships they would be bumping into each other. Now the same could be said of the waters around Australia.

Carnival Australia announced today that Dawn Princess would be transferred to the P&O Australia fleet in May 2017. Adding even further to the expanding Australian capacity will be Golden Princess. It will remain in Australia throughout 2017 rather than returning to Japan for the Japanese summer season.

Details appeared in the October 7 edition of Cruise News Daily.

“No Doubt about It,” Norwegian Cruise Line did not go the traditional route in choosing someone to name Norwegian Escape. Their choice is bound to stir up controversy among traditionalists - and superstitious mariners.

The line said today rapper Pitbull will name Norwegian Escape in Miami during a “high-energy pier side ceremony” on November 9.

The complete story appeared in the October 7 edition of Cruise News Daily.

Grand Theater or Is the End Nearing?

The SS United States Conservancy has released a statement on their website saying the board has reluctantly started the process to find a recycler for the ship, but they point out several times, that just because they are starting the process, it doesn’t mean that dismantling the ship is inevitable.

SANTA CLARITA, Calif. (Oct. 7, 2015) – Carnival plc announced today that Anthony (Tony) Kaufman has been promoted to the new position of executive vice president, international operations for the Princess Cruises brand. In addition to his continued leadership for the line’s Asia operations, he will now oversee the business in Australia, the United Kingdom and Europe.

In his previous role as senior vice president of Asia operations, Kaufman has been accountable for multiple sales and marketing teams throughout Asia that are focused on growing the Princess brand throughout the region and supporting the brand’s itineraries in China, Japan, Taiwan, Hong Kong, Korea and Singapore. In addition, he developed Princess Cruises’ strong relationships with government authorities, industry associations and business partners in the region. He also facilitated coordination with the many operating departments that support Princess’ growing Asia deployment.

“Tony has been instrumental in guiding our successful expansion into Asia and delivering a customized product that has truly resonated with our guests,” said Jan Swartz, president of Princess Cruises. “With the additional oversight of Australia, the United Kingdom and Europe, he will continue advancing the Princess guest experience, growing our business, and meeting our operational objectives in these additional regions as well.”

Prior to his role overseeing Asia operations for Princess Cruises, Kaufman held the position of senior vice president of commercial affairs, which was a broad commercial role that included responsibility for onboard revenue and worldwide shore operations, as well as commercial transactions such as shipbuilding contracts, ship sales, and charters. He has also served as general counsel of the former P&O Princess Cruises plc based in London, and has held various other roles in legal and business affairs since joining the company in 1993.

Kaufman is based in the company’s Santa Clarita, California world headquarters office.

Carnival Corp put a new port on the map today when Carnival Victory became the first ship to call at the company’s latest company-owned port, Amber Cove, on the northern coast of the Dominican Republic.

The complete story appeared in the October 6 edition of Cruise News Daily. 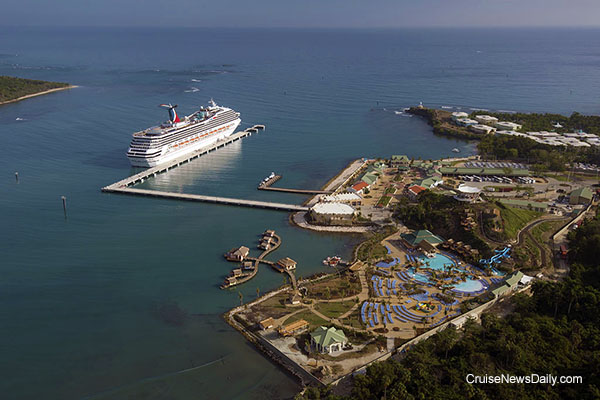 We have more photos of Amber Cove on Pinterest.
Photos courtesy of Carnival Corp. All rights reserved. May not be copied or used without permission.
. 10/06/2015 11:59:00 PM

If you were wondering where Disney ships will be sailing in the first part of 2017, you can wonder no more because the line released some basic information today, with the details coming Thursday (October 8), when the sailings open for sale.

Disney is the master of surprises and innovation, so it’s surprising that the big surprise about the programs is that there are no surprises or anything that unusual. The schedule doesn’t even take Disney into any new home ports.

Details appeared in the October 6 edition of Cruise News Daily.

Carnival Cruise Line has revamped their air program to give passengers more flexibility in that passengers can choose and customize almost any aspect of their air itinerary. It also gives them more protection should things go awry on the way to the ship.