Email ThisBlogThis!Share to TwitterShare to FacebookShare to Pinterest
Labels: Quantum of the Seas, Royal Caribbean, video

* The Laugh’s on Carnival
Carnival Cruise Lines’ advertising often takes a different tack than the traditional ones that say, “Buy our cruises,” but this time Carnival has found a unique new avenue to get their message in front of potential customers.

* Other Things You’ll Want to Know
CND subscribers also read about Costa Diadema debuting at Trieste ... a gem of an idea ... and why Grand Cayman still doesn't have a pier.

Earlier this week, Fincantieri delivered the 132,500-ton Costa Diadema to Costa Cruises. Yesterday it left the shipyard, and today it made its first port call at nearby Trieste (Italy). Trieste will be the site of a huge celebration tonight with a gala dinner and fireworks display over Trieste. Tomorrow the ship will leave on a cruise to Genoa where it will be christened and from which it will depart on its inaugural cruise. Costa Diadema is the largest ship ever to fly the Italian flag.

Photos courtesy of Costa Crociere. All rights reserved. My not be copied or used without permission.

Quantum of the Seas Arrives at Southampton

Royal Caribbean made their first port call with Quantum of the Seas since assuming ownership of the newbuild when it arrived at Southampton yesterday evening (October 29, 2014). The ship will be engaged in promotional activities there until it departs on its first revenue cruise on November 4, a transatlantic crossing to New York. 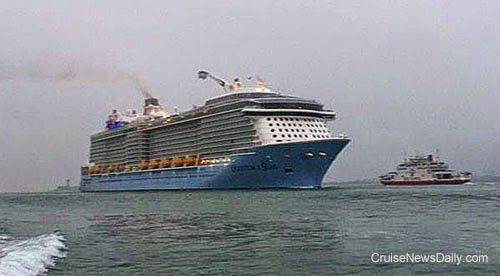 Email ThisBlogThis!Share to TwitterShare to FacebookShare to Pinterest
Labels: Quantum of the Seas, Royal Caribbean, Southampton

Miami (October 30, 2014) – Gerry Cahill, president and CEO of Carnival Cruise Lines, announced today that he is retiring, effective November 30, after 20 years of service.

Cahill, 63, has been CEO of Carnival Corporation’s largest cruise brand since 2007, growing the cruise line to 24 ships – the largest in the company’s fleet -- during his tenure.

“Gerry has been instrumental in taking Carnival Cruise Lines to new heights as one of the preeminent brands in the cruise industry,” said Arnold Donald, president and CEO of Carnival Corporation & plc, the world’s largest cruise company. “He and his team have delivered new innovations to cruising while growing the business year after year.”

During his tenure as CEO, Cahill and his team launched four new ships and introduced a new class of ships, the Dream class, which included the Carnival Dream, one of the largest ships in the company’s fleet, as well as Carnival Magic and Carnival Breeze with its many new branded spaces and experiences.

Cahill and his team also oversaw the delivery of new cruising features such as the innovative Fun Ship 2.0 ship enhancements and Carnival LIVE concert series, a first in the cruise industry, as well the Carnival Seuss at Sea program, an exclusive partnership that brought the beloved Dr. Seuss children’s brand and characters to its ships. He and his team also developed partnerships with major brands to offer passengers popular on-board features, such as celebrity chef Guy Fieri for Guy’s Burger Joint and comedian and TV personality George Lopez for The Punchliner Comedy Club.

No replacement for Cahill is being named at this point. Cahill has agreed to stay on in an advisory capacity for an unspecified time to provide advice and counsel to the leadership team through the transition period.

“It has been an honor and a privilege to lead Carnival Cruise Lines for the past seven years and to work for this great company for 20 years,” said Cahill. "Deciding when to retire is not easy, especially when you love what you do. I feel the time is good for me personally and the company and brand are in a good place. Our employees are the finest, most dedicated people I know, and the thing I will miss most in my retirement is the opportunity to come to the office each day and work with such talented individuals.”

Cahill graduated from the University of Miami, earning his B.B.A. degree in 1973.

* A Chance to Say Good-bye Just It Began
Seabourn fans know this will be the final season Seabourn Spirit and Seabourn Legend will be sailing for the ultra luxury line. They have one last chance to say good-bye to the two remaining sisters that helped start the luxury line.
The two yacht-like ships are scheduled to return to the Caribbean for their final season, the same place they began sailing for Seabourn some twenty-five years ago. Both ships’ itineraries will be in Seabourn’s “Uncommon Caribbean.”

* Other Things You’ll Want to Know
CND subscribers also read about much ado about nothing new ... good and better ... on a streak ... and gold in the spa.

Photos courtesy of Meyer Werft and Royal Caribbean International. All rights reserved. May not be copied or used without permission.
. 10/29/2014 04:23:00 PM

* Something New for 2016 from Disney
Disney is doing it again. Disney keeps its regular customer base satisfied by providing a variety of itineraries and following a game plan somewhat different from the rest of the industry. Seasonally they move their ships and modify itineraries to always give passengers something new - new home ports, new ports of call and even new destination areas.
Disney has just released their programs for early 2016, and while all four ships will be in the Caribbean, they have some eye-catching itineraries that are worth considering.

* Other Things You’ll Want to Know
CND subscribers also read about handing it over ... a time when you'd rather have Nobu than any bu ... and floating like a butterfly and performers like Sting.

* Getting Ready for Quantum
The Port Authority of New York and New Jersey and Royal Caribbean dedicated the new cruise terminal at Cape Liberty Cruise Port today in Bayonne (NJ).
The state-of-the-art terminal is the second at the port. It was built to handle Quantum of the Seas which will arrive on November 10, 2014.

* Other Things You’ll Want to Know
CND subscribers also read about something going overboard ... just on a smaller scale ... keep on dancing ... and not really a change of plans.