P&O Cruises said today that Oriana will be leaving their fleet in August 2019.

The complete story appeared in the June 29 edition of Cruise News Daily.

It took some careful driving (sailing) on Wednesday, but Windstar's Star Legend became the largest ship ever to transit the Ballard Locks and sail on Seattle's Lake Union.

The ship is sailing this summer on an Alaska program from Seattle, and this was a special detour that carried employees, VIPs, travel partners and media on the daylong excursion. It was the first time a Windstar ship had visited Seattle in 27 years.

Last night it was a night out courtesy of Carnival Cruise Line for the brave men and women of the Armed Forces at Point Loma Naval Base in San Diego. The cruise line hosted “Humor for Heroes” in conjunction with Operation Homefront. The evening featured stand-up comedy performances, BBQ, fun activities and more.

Fincantieri laid the keel today for Seven Seas Splendor at their Ancona yard.

The 55,000-ton ship is a twin to Seven Seas Explorer that was delivered by Fincantieri's Sestri Ponente yard in 2016. Delivery is scheduled for the spring of 2020. 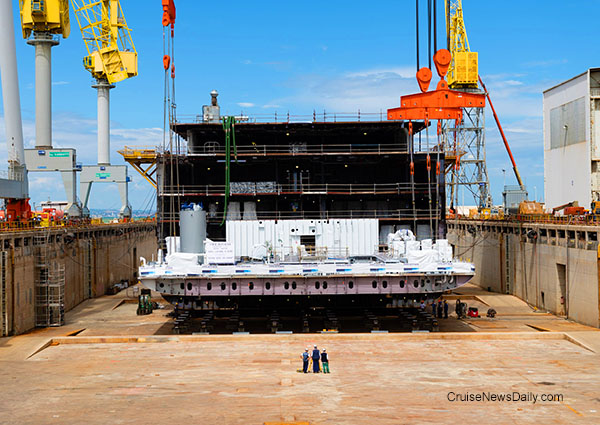 It's a Miracle - Carnival Returns to San Diego

Carnival said they will return to San Diego for the first time in seven years with a winter 2019/2020 program operated with Carnival Miracle.

The program will run from December 2019 into February 2020 with a varied schedule of three- to 15-night cruises.

The King Is Going Down Under

Prepare yourself. There is going to be another Elvis sighting. This time it will be Down Under.

Elvis will be seen aboard P&O's Pacific Explorer as it sails on a three-night cruise from Sydney on May 17. (Yes, that's almost a year away, but they are giving you plenty of time.) Coincidentally it will be a special sailing, which will be the second annual “Tribute to the King.”

Last week Celebrity Cruises announced they will have a new terminal for their home port at Port Everglades (Ft. Lauderdale). The new terminal will be called Terminal 25, or T25, and it will reflect the same styling as Celebrity's soon-to-be-delivered Celebrity Edge.

T25 is scheduled for completion in late October of this year, and it will be the home port of Celebrity Edge, Celebrity Infinity, Celebrity Reflection and Celebrity Silhouette this winter. Other Celebrity ships will use it as they pass through Port Everglades as well as other cruise lines when Celebrity doesn't have a ship in port.

With Disney planning to add three new large ships to their fleet annually beginning in 2021, Port Canaveral is believing at least one of them will be homeported at the Central Florida port.

That has sent the port into another round of studies of how to expand.

MSC Cruises said today they would be collaborating with Total Marine Solutions in installing Ocean Guardian aboard all their ships fleetwide by the end of next month.

The software is essentially a database, which is updated constantly, of all international and local environmental regulations.

This Man Doesn't Want You to Cruise to Cuba

According to an American man, living in the UK, every time you take a cruise to Havana it's like trafficking in stolen property. That's because he and the US Government believe he owns Havana Harbor.

The complete story appeared in the June 26 edition of Cruise News Daily.

Carnival Spirit returned to its Sydney home port on Sunday after a two-week dry dock in Singapore. The ship has been away over a month, however, because of the lengthy repositioning cruises each way.

Passengers sailing on cruises out of Southampton should feel very uneasy thanks to a leaked British report that says in a test, investigators were able to smuggle a total of 28 weapons past security in all four terminals at Southampton. This included guns, knives and even eight IEDs (bombs).

They got them past walk-through scanners, detection wands, pat-downs and x-rays, causing investigators to conclude in the report that the screeners “lack the moral fibre to challenge suspicious behavior, or are completely oblivious to what is going on around them.”

The complete story appeared in the June 25 edition of Cruise News Daily.