Majestic Master of His Domain

This week Princess Cruises announced that Captain Dino Sagani has been named Master of their next ship, Majestic Princess, which is under construction at Fincantieri and scheduled for delivery in April. Captain Sagani has been with Princess for 21 years.

Details appeared in the February 6 edition of Cruise News Daily.

Looking under the ship

As we reported back in January, Carnival Inspiration began a three-week dry dock at the Vigor Shipyard in Portland, Oregon. During the time out of service, Carnival added many of their newer and most popular features to the ship. We took that as a vote of confidence that they intend to keep the Fantasy-class around for a while. One feature we didn’t mention at the time is that they are adding the ability of the ship to accept shore power while in port, a requirement in Californian ports.

Carnival released some photos of the ship in dry dock which we thought were interesting and give us a look under the ship.

The ship will return to service from Long Beach on Monday. 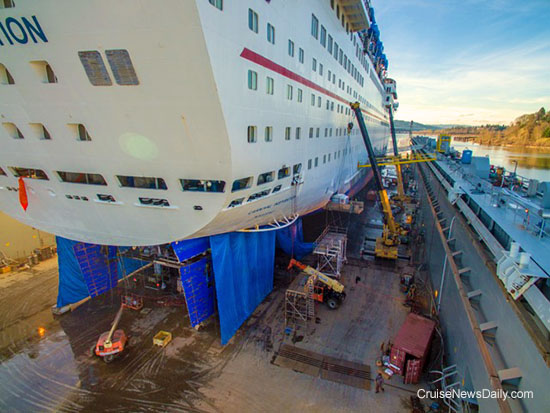 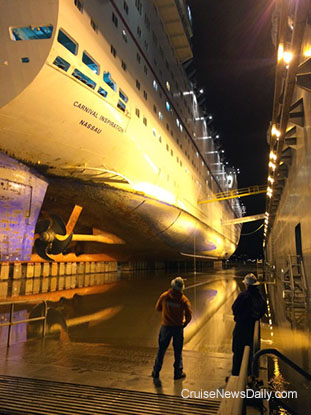 Contrary to earlier plans and assumptions, the SS United States will not become a floating hotel or amusement center, permanently moored in some East Coast city. Plans now are to once again revive it as a cruise ship.

With great fanfare, Crystal Cruises today announced they have an option to buy the classic liner and restore it to sailing status. They are currently beginning a feasability study which they plan to complete by the end of the year.

It would seem the Fathom paradigm is changing. The line announced a BOGO promotional rate on their program to the Dominican Republic. This should not be much of a surprise to most cruisers, because cruises are seldom sold at full price. (It was perhaps more surprising to cruisers that Fathom ever tried to sell any cruises at full price.)

It doesn’t fit with Carnival’s original vision of the brand.

The complete story appeared in the February 3 edition of Cruise News Daily.

Costa Cruises’ next generation of ships will have a new look inside, because the line has a new architectural visionary to lead the design process.

Costa has appointed noted New York-based hospitality designer Adam Tihany as Creative Director for the two ships scheduled for delivery in 2019 and 2020. They are the next generation of Costa’s vessels.

Details appeared in the February 2 edition of Cruise News Daily.

The initiative works alongside Grammy-winning star Carrie Underwood. Ms. Underwood will also be joining the Carnival Live roster of artists in early 2017.

The complete story appeared in the February 2 edition of Cruise News Daily.

MSC Cruises announced today they were exercising their options for two additional Meraviglia-class to be built by STX France. The two ships will not be exact duplicates of the Meraviglia-class. They will be larger and designated as Meraviglia-Plus.

The announcement came at the STX yard in Saint-Nazaire during a coin ceremony for MSC Meraviglia.