Word on the Caribbean Street

If you are sailing from Florida on one of the Carnival brands, it seems you'll probably have a new port to visit in the not-too-distant future. Caribbean media is reporting that Carnival Corp is on the verge of announcing a new cruise port on Grand Bahama Island.

Carnival has confirmed to CND that the project is moving forward, but they aren't ready to talk about details at this point.

The complete story appeared in the August 23 issue of Cruise News Daily.

How It Works - Medallion Net

We've explained how it works, but Princess has just released a new video that makes the explanation clearer with the use of graphics.

You can watch the video below.

This story appeared in the August 23 edition of Cruise News Daily.

Sprucing up the Kiwis' Home

Princess Cruises' Australian branch launched a new program to support local community interest in the destinations they visit and give passengers an opportunity to connect with them.

The first beneficiaries of the new “Princess Local Partnerships” will be New Zealand's Kiwis (the birds, not the fruit) around the Bay of Islands.

Norwegian Encore made its debut at the Meyer shipyard in Papenburg Saturday when it was floated out of their giant covered building dock.

A float out at a shipyard is always a big event, but it's a bit more dramatic at Meyer Werft. At other yards it's a big deal because it's the first time the ship has ever touched water. Then a day later or so, the ship is actually floated (and towed) out. It's been built in full view of everyone. The big deal in the float out is basically symbolic.

At Meyer, the ship and/or pieces of it have been floating for some time because of the way vessels and pieces of them have to be moved around in covered building dock. It's been somewhat visible in photos and on the webcam, but because of the close quarters, it's impossible to really see the whole ship. Where the drama comes in at the float out, it's usually the first time the public has seen the entire ship, and it's usually dramatic.

In the case of Norwegian Encore, it's colorful. This time the line has gone with a bright geometric pattern for the hull art rather than the whimsical sea creatures in blues and greens of late. There are photos below.

The complete story appeared in the August 19 edition of Cruise News Daily. 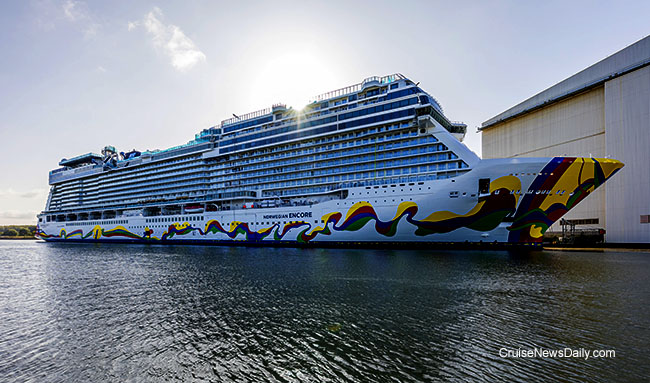 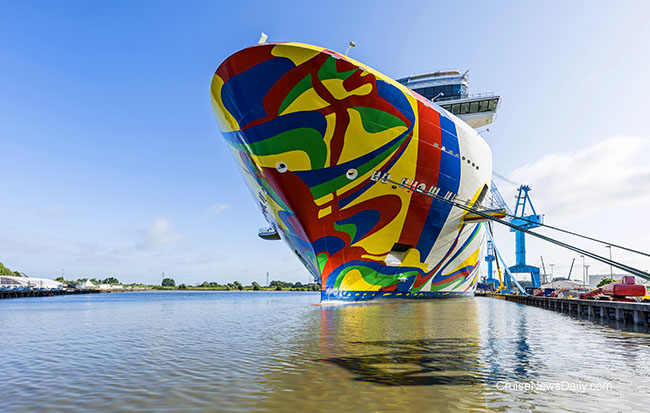