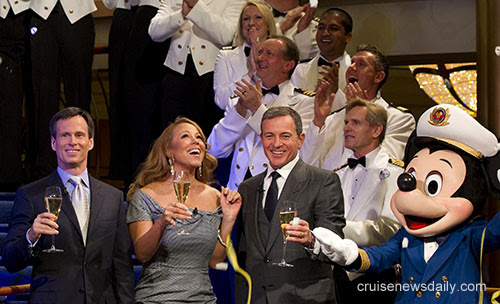 Singer Mariah Carey joins Walt Disney Company President and CEO Robert Iger (right), Walt Disney Parks and Resorts Chairman Thomas Staggs and Mickey Mouse for the christening of the newest ship of Disney Cruise Line, the Disney Fantasy, in New York City, on March 1, 2012
In an unusual ceremony (probably designed around the ship being christened in New York in the winter) Carey led the audience in a countdown that triggered a 6-foot tall bottle of champagne in the Atrium Lobby to erupt and shower onlookers with confetti and streamers as a traditional bottle of champagne broke against the ship’s hull.

"At Disney Parks and Resorts, we strive to be the most trusted and highest quality provider of shared travel and leisure experiences in the world,” said Walt Disney Parks and Resorts Chairman Tom Staggs. “From stem to stern, the Disney Fantasy was designed and built with the singular purpose of surprising and delighting our guests, helping them make memories to last a lifetime.”

Disney Fantasy left New York Friday afternoon (March 2, 2012) about 4:30pm en route to her home port in Florida. As she left, one of our favorite videographers NJPhotographer62 on YouTube took this short video of the departure with the added bonus of a short concert on the ship's whistles as it says good-bye to the Big Apple.