The Port of Miami is excited by the recent announcement that Carnival Breeze will be homeporting there beginning in November 2012. Most new ships in recent years have been bypassing the port, once considered the cruise capital of the world, and homeporting a few miles to the north at Port Everglades or elsewhere in the country considering the stiff competition for ships. Even though Carnival Breeze won’t arrive in Miami for more than a year, the port has erected a massive 3,000-square-foot billboard welcoming the ship to Miami. It can be seen on I-395 which connects Miami and Miami Beach - or here on the CND blog below: 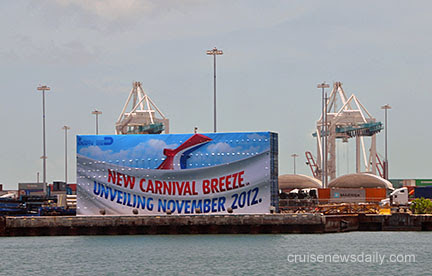