Disney Fantasy was floated out of the covered building dock this afternoon (January 8, 2012) at Meyer Werft's Papenburg (Germany) yard. The slow process was witnessed by several hundred people, mostly local, who had come to the yard for the event, complete with a few fireworks set off from the top of the ship and a tune from the ship's musical whistle.

There were intermittent showers during the hour-long process as the ship was towed into the lagoon, but the sun did shine as the engine tests began. At the completion, Disney Fantasy was docked at the yard's finishing dock. The next major step in the process will come when the ship will make its conveyance down the Ems River later this month.

Photos from this morning's event: 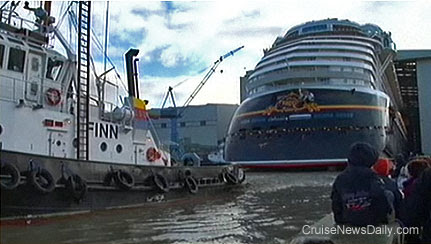 Preparations began on time Sunday morning, but the weather and technical
issues delayed the actual towing until after noon. The actual towing process
took more than an hour for the Disney Fantasy to be towed into the lagoon. 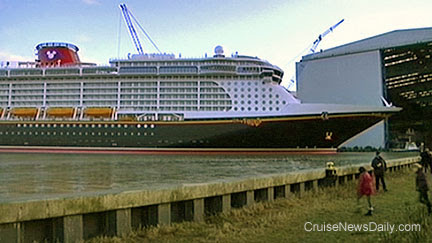 Once in the lagoon, tugs turned the ship and technical tests were performed. In a typically Disney touch, two bursts of fireworks were set off from the
ship's top deck, and the ship's musical whistle played. 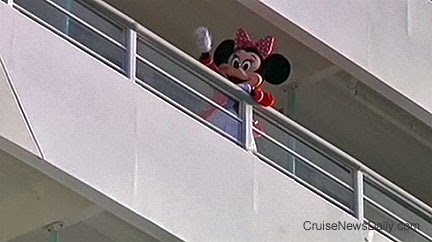 Minnie Mouse was aboard for the event and waved to some of the hundreds of
local residents who came to the yard to see the ship's public debut. 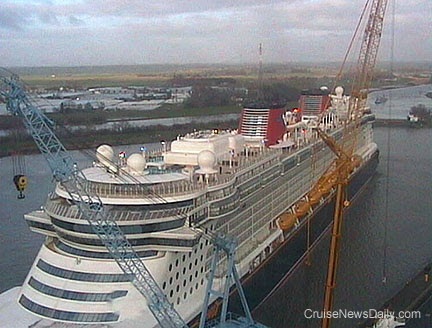 Once the tests were completed, tugs nudged the ship toward the finishing
dock (at lower right in the photo) where it will remain until it leaves
the yard in approximately two weeks. Due to Meyer's unusual building process,
the ship is essentially completed at this point. (At other yards, float out
from the dry dock takes place much earlier in the process, and most of the
interior work would still remain to be completed.) In Disney Fantasy's case,
relatively little work remains inside, and only minor projects - such as
attaching the ship's mast - remain on the exterior. 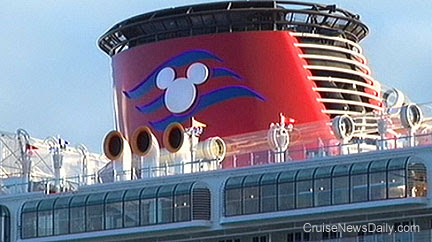 The ship's "watercoaster" tube is seen by one of the twin funnels.
Photos courtesy of vid caps from NDR.de and Meyer Werft live video coverage.


Video from Saturday when the ship is prepared for Sunday's operation shows more of Disney Fantasy's detail:


And last, but not least, the Disney perspective on the day's activities: