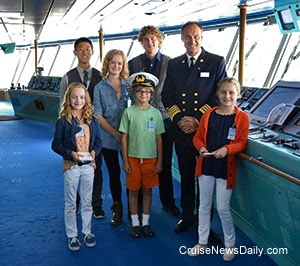 Seattle, Wash., Oct. 8, 2013 — Holland America Line hosted the last non-profit luncheon of the season at the Port of Seattle Saturday, Sept. 21, 2013, aboard ms Westerdam for the Seattle Children’s Theatre, one of the line’s community partners.

Prior to the luncheon, attendees were treated to an exclusive performance in the ship’s main show lounge, highlighting musical selections from SCT’s upcoming holiday production, James and the Giant Peach, by Tony-nominated composers Justin Paul and Benj Pasek. Guests were also treated to a private reading of Art Dog by composer Sue Ennis, and participated in a live auction for a chance to tour the ship’s bridge with the Captain.

“We have always been a big supporter of the arts, but we’re especially thrilled when we can partner with an organization that promotes art and education for children,” said Richard Meadows, Holland America Line’s executive vice president of marketing, sales and guest programs. “It was great to close our non-profit onboard event season in Seattle with performances from such talented, young local performers.”

“We are thankful to Holland America Line for hosting us onboard to launch our upcoming season,” said Mary Ann Ehlshlager, managing director of Seattle Children’s Theatre. "It was great fun to perform in the Westerdam’s elegant theatre, and to see how SCT’s high caliber professionals and creative know-how translates effectively to another space. It’s always a pleasure to work with the talented stage crew there.”

Founded in 1975, SCT started as a program of the Seattle Department of Parks and Recreation with initial funding from the City of Seattle and PONCHO (Patrons of Northwest Civic, Cultural and Charitable Organizations).

Since its inception, Seattle Children's Theatre has strived to provide innovative artistic programming and professional theater for the young people and families of the Puget Sound region. SCT moved into the 482-seat Charlotte Martin Theatre in 1993, the 275-seat Eve Alvord Theatre in 1995, and completed the Allen Family Technical Pavilion, which consists of the paint, costume, prop and scene shops as well as rehearsal and classroom spaces, in 2000. This state-of-the-art facility was the first self-contained theater complex built for young audiences in the nation, and has since been used as a model for other theaters. For more information visit, www.sct.org.