Last March a man was rescued from the Pacific Ocean after being adrift for 28 days. Passengers aboard Star Princess said they had seen a man waving in distress and had taken pictures. They alerted a crew member, but Star Princess never stopped. In the side-by-side display below, provided by Princess, it shows the differences between the boat the survivor was in when he was rescued, and the boat photographed by the passengers aboard Star Princess. Experts have authenticated that they are two entirely different boats and that based on the wind and ocean currents, it is unlikely the boat in question and Star Princess ever crossed paths. 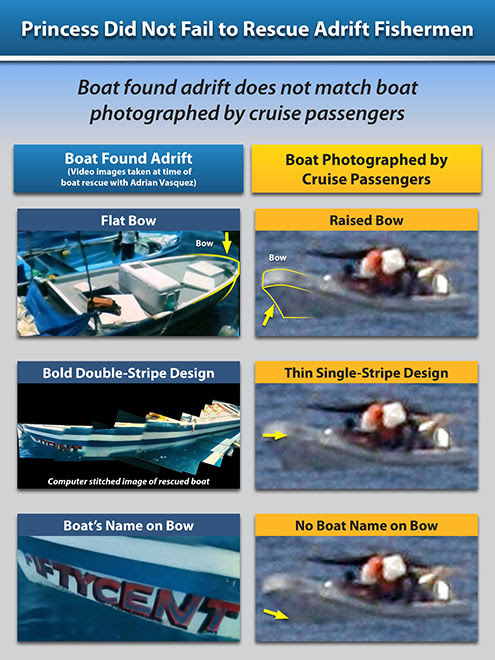 Princess also found video of the man's rescue last March. Again, it shows a marked difference between the two boats, indicating the boat the passengers aboard Star Princess saw and the one with the man in distress were different ones. It is believed that the boat the passengers photographed may be one of a group the crew of Star Princess had seen earlier with which they exchanged visual greetings.

The complete story appeared in the August 30, 2012, edition of Cruise News Daily.