Will the Real Gavin MacLeod Please Stand Up?

In these days of the internet, you probably realize there are dozens of people with whom you share the same name. Likewise Gavin MacLeod realized there was an actor with the same name, but never gave it much thought, even after he joined Princess Cruises in 2010. The other Gavin MacLeod, of course, holds a special place in the hearts of the front office at Princess, because he played the part of Captain Stubing in the iconic Love Boat television series which was set aboard one of the line's vessels, Pacific Princess.

As you probably know, Princess still has a relationship with that "other" Gavin MacLeod, because he's been their ambassador for many years, still assuming his Captain Stubing persona often and meeting fans at various functions, and often hosting (as himself) the naming ceremonies of Princess' new ships. When he learned Princess had a third officer aboard Island Princess sharing his well-known name, he was excited about meeting him. So last week when Island Princess came through Los Angeles, the two met on the ship's bridge and had lunch together at Sabatini's. The pair also signed several navigational charts to be auctioned for charity. 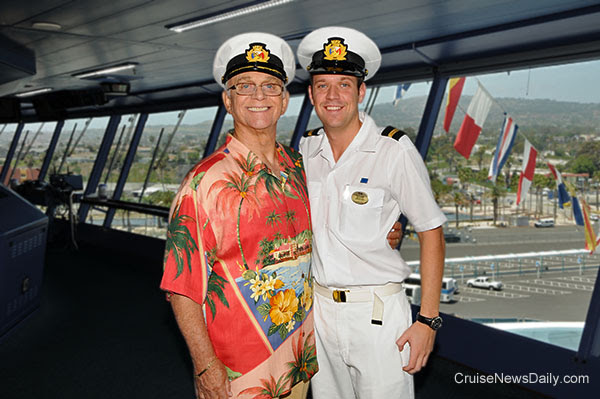