UPDATE: 8:15am Eastern US time
Quantum of the Seas is backing away from the dock and should pass the barrier into the Ems at just about 2:30pm as called for in the revised plan. That puts arrival at Eemshaven at approximately 4:30am on Tuesday (10:30pm on Monday Eastern US time).


UPDATE: Monday, September 22 (6am Eastern US time)
Weather conditions along the Ems have improved and Meyer Werft says they plan to begin the river conveyance of Quantum of the Seas at approximately 2:30pm (8:30am Eastern time in the US).

UPDATE: Sunday, September 21:
Meyer Werft has now delayed the river conveyance of Quantum of the Seas until at least Monday due to possible strong winds on Sunday afternoon and evening.

A decision and announcement will be made at noon on Monday (6am Eastern time in the US).

Saturday,September 20:
Meyer Werft said this morning that the conveyance of Quantum of the Seas will be delayed due to weather conditions.

It had originally been scheduled to begin at approximately 2pm on Sunday (8am, Eastern time in the US). Later times on Sunday are now being considered, but it could also be delayed until a later date.

Meyer said a decision will be made at approximately noon on Sunday (6am, Eastern time in the US).

The conveyance will take the ship down the Ems river to the sea. 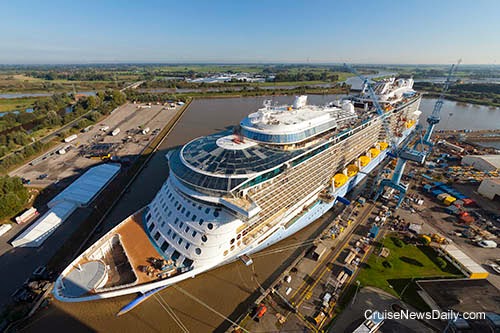