A coast Guard helicopter crew from Houston evacuated a 73-year-old man from Carnival Triumph in an unusual nighttime operation Thursday night (Dec 29, 2011) about 11:40pm when the ship was about 120 miles off the coast of Galveston (Texas).

The man was suffering from a blood clot in his foot. He was taken to a local hospital in the Houston area.

The video below, provided by the US Coast Guard, opens with the rescue swimmer being lowered to the deck of the cruise ship from the MH-65C Dolphin helicopter, followed by the stretcher. In the next scene, the helicopter is making another pass coming up on the ship from its stern and then hoisting the patient on the stretcher from the deck. While this is going on, note the speed at which the ship is moving through the water and how the helicopter has to synchronize its speed to appear motionless over the deck. Also note the crew member in the helicopter leaning out to steady and position the stretcher with his foot. At the end of the operation, the rescue swimmer is hoisted from the deck.

Disney Fantasy Gets Its Elephant

A Disney tradition is that each of their ship’s has a larger-than-life character suspended over the stern that appears to be painting the ship’s name there. Back in September Disney revealed that the character given that singular honor on Disney Fantasy will be Dumbo.

The flying elephant was installed in his place of honor on the almost-complete Disney Fantasy on December 14 (2011) at Meyer's Papenburg yard as shown in the photos below. The video shows the creation of flying elephant and the attention to detail. 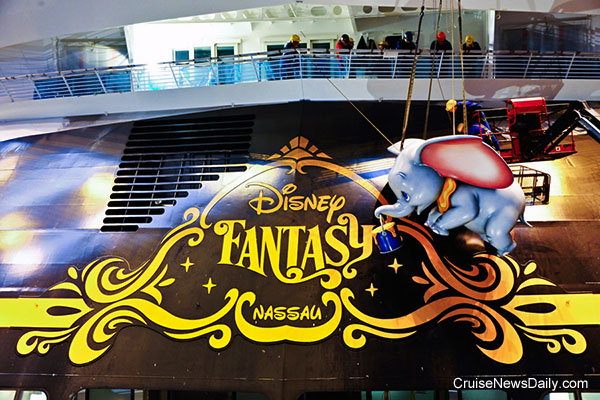 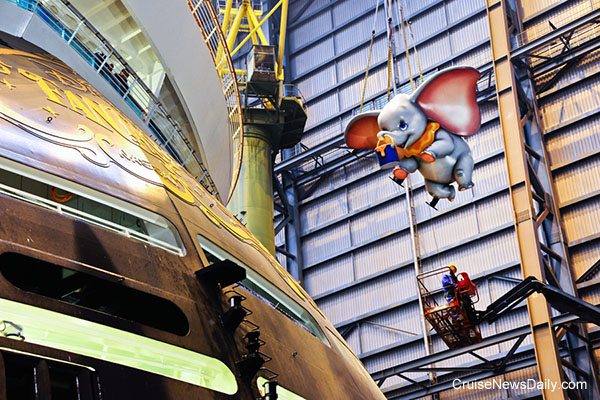 The complete story appeared in the December 29, 2011, edition of Cruise News Daily.

A crew member went overboard from Celebrity Summit on Saturday evening after the ship left San Juan. A crew member witnessed the other crew member jumping overboard at 12:23 am (Sunday, December 25) and reported it to the bridge.

The ship's captain immediately stopped the ship and returned to the location to begin a search. The Coast Guard says they were notified at 12:50am Sunday and began to deploy assets to the scene which was approximately six and a half nautical miles off the northeastern coast of Culebra Island, Puerto Rico.

Later on Sunday the Coast Guard advised Celebrity Summit they would assume control of the search and the ship could resume its voyage to Barbados. On Monday, after searching some 2,000 square nautical miles without finding the woman, the Coast Guard suspended their search.

The complete story appeared in the December 27 (2011) edition of Cruise News Daily.