* A Singular Refit
Queen Elizabeth has arrived at the Blohm + Voss Shipyard at Hamburg for her first scheduled dry dock since she entered service in 2010.
Following the multi-million-dollar refit, Queen Elizabeth will leave the yard on June 1 and return to service on June 4 with a short cruise from Southampton to Amsterdam.

* Norwegian Jewel Returns from Dry Dock with New Facilities
Norwegian Jewel is returning to service Saturday after its regular dry dock, refurbished and ready for its Alaskan season. Of course, after Alaska, Norwegian Jewel will be ready for Norwegian’s return to the Houston market this fall.
During the two-week dry dock, numerous enhancements and changes were made.

* Other Things You’ll Want to Know
CND subscribers also read about a top level meeting ... a big day in Vancouver ... and a even bigger day in Barcelona. 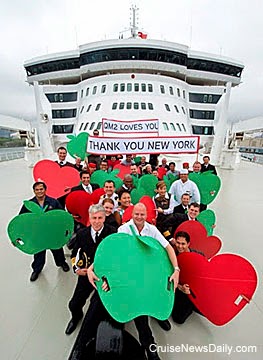 Master of Queen Mary 2, Captain Kevin Oprey together with members of his crew celebrate the ship’s 10th anniversary in New York City today. Cunard is today recongnising the long standing and enduring relationship with New York having sailed here since 1845. Cunard continued its celebration 10th anniversary of its flagship, Queen Mary 2 with her arrival in New York on May 16th from Southampton during the first of a pair of commemorative Transatlantic Crossings. Her arrival in the Big Apple pays homage to her maiden Transatlantic Crossing 10 years ago.

The ship arrived at first light to begin a day of joyous celebration in the city. A special afternoon reception on board was hosted to toast Cunard Line’s and Queen Mary 2’s long-standing relationship with New York over the past decade.